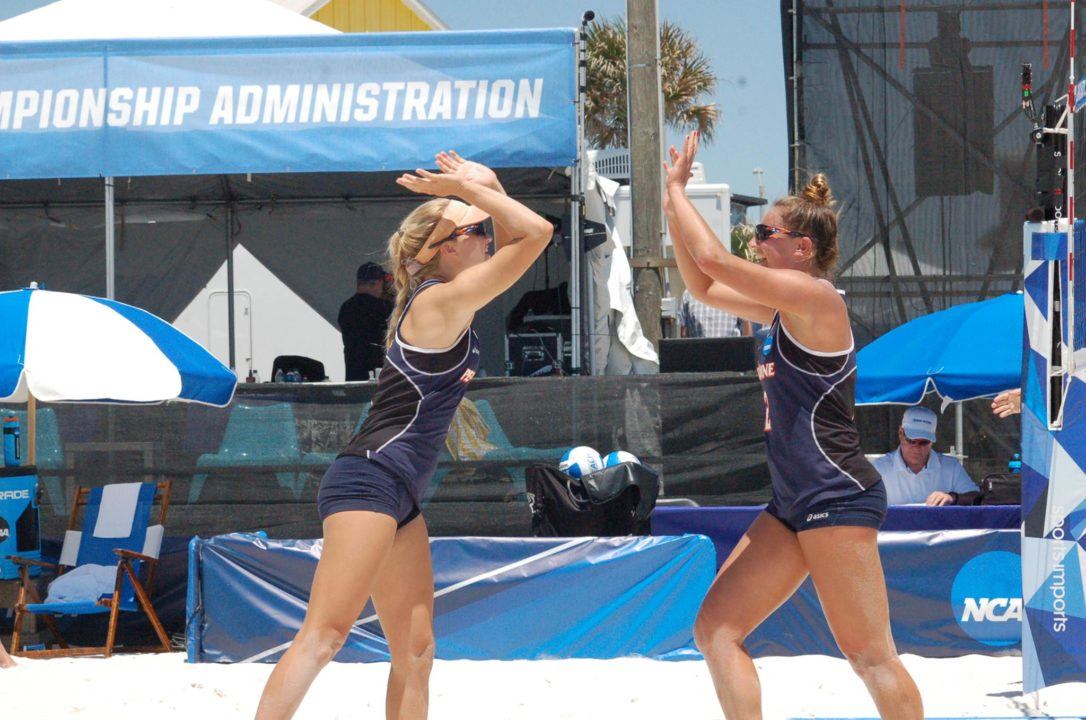 In a change from the jam-packed competition weeks previously scheduled, the 2nd-ranked Pepperdine beach volleyball has one match with 5th-ranked... Current Photo via Pepperdine Facebook gallery

In a change from the jam-packed competition weeks previously scheduled, the 2nd-ranked Pepperdine beach volleyball has one match with 5th-ranked Hawai’i to focus on this week.  The match is scheduled for Wednesday at Zuma Beach, beginning at 1 p.m.

FORMAT – With just one match on the docket, there will be a three-court format for the day with the No. 4, No. 5 and No. 6 pairs kicking off the day at 1 p.m.  After the completion of the matches on those courts, the No. 1, No. 2 and No. 3 duos will then play after a 15-minute break.

LOOKING AHEAD – After this week, the Waves will host the team’s final home matches against Grand Canyon and No. 6 Long Beach State on April 5 at 1 and 3:20 p.m.  All the seniors and graduate students will be honored.

CAN’T STOP, WON’T STOP – Along with an 11-match winning streak, the Waves have won 80 sets of the last 83 total sets played against opponents.  The last five-matches for Pepperdine have been straight-set sweeps.

THE NO. 2 WAVES – Pepperdine has ranked No. 2 in the AVCA Coaches Poll for the last three-consecutive weeks, steadily moving up in the rankings from No. 4 in the preseason poll to the team’s current spot.  The Waves have gone 12-1 overall and are currently on a 11-match winning streak with a 6-1 record at Zuma Beach and a 5-1 record when playing nationally ranked competition.

The Waves No. 1 pair, Delaney Knudsen and Madalyn Roh, have gone 10-3 in the hot-spot including a 3-3 record when playing nationally ranked competition.  On court two, Brittany Howard and Corinne Quiggle have been instrumental to the team’s successes with a 12-1 overall record, including a 5-1 output against pairs from nationally ranked pairs.  Skylar Caputo and Heidi Dyer and Anika Wilson and Deahna Kraft have been mainstays at the No. 3 and 4 positions for the Waves, each posting 11-2 records since the season opened.  Each duo has also registered a 4-2 record when playing teams from nationally ranked squads.  After testing out a few pairs at the No. 5-slot, the Waves have been steadily successful since Kaity Bailey and Gigi Hernandezearned the consistent start, posting a 7-0 uncontested record in the position with a 1-0 record against nationally ranked opposition.

OPPONENT NOTES – Pepperdine has posted a 7-1 record againstHawai’i since the team’s first met in the 2012 campaign.  From 2012-14, Pepperdine went on a five-match winning streak with all the matches resulting in sweeps.  The Rainbow Warriors picked up the team’s first and only win on the road with a 3-2 final mark.  Since then, the Waves have won two-consecutive matches, including a 3-2 win in a neutral setting in 2015 and a 5-0 sweep at home in 2017.  UH has gone 15-2 since the season began, earning the No. 5-spot in the AVCA Coaches Poll.  The Rainbow Wahine have played both No. 1 USC and No. 4 Florida State earlier this season, with the Trojans taking a 4-1 win and the Seminoles winning 3-2 in the same weekend at Hawai’i.  UH is currently on a four-match winning streak with 5-0 victories over Irvine Valley College and Stanford and 4-1 wins over Nebraska and TCU.

#NCAATOP10 – Pepperdine is not only the sole beach volleyball team that has been featured on the #NCAATop10 lists in social media, but the Waves have earned a spot in three of the last four weeks.  This week, sophomore Nikki Lyons and graduate student Tiffany Morales made their way onto the list at the No. 9 spot as the pair brought the hammer down on CSU Bakersfield at Zuma to help lead the Waves to another 5-0 sweep.  In previous weeks, Pepperdine’s No. 1 pair senior Delaney Knudsen and sophomore Madalyn Roh and the No. 2 duo graduate student Brittany Howard and junior Corinne Quiggle have also earned the honor as each pair broke the top-10 at No. 7.

PRESEASON HONORS & POLLS – The Waves ranked 4th in the AVCA preseason poll and were picked as the favorite to finish as the West Coast Conference Champions again by the WCC coaches.  Pepperdine was also charted in the No. 4 spot on DiG Magazine.  Five Waves, senior Delaney Knudsen, junior Corinne Quiggle and sophomores Heidi Dyer, Skylar Caputo and Madalyn Roh earned Preseason All-WCC accolades.

BEACH VOLLEYBALL HISTORY – The Pepperdine women’s sand volleyball program has been at the forefront of the sport since it was introduced in 2012. The Waves went a perfect 14-0 in dual match play and won the inaugural AVCA Collegiate Sand Volleyball National Team Championship in Gulf Shores, Ala. Pepperdine’s Caitlin Racich — the program’s first-ever scholarship recipient — and partner Summer Ross took home the pairs national crown as well. In 2013, the Waves marched back to the national title match but fell 3-2 while playing shorthanded. The Waves returned with a vengeance in 2014, going 18-1 in route to the national championship title. The Waves boast a nation-best 14 AVCA All-Americans: Lara Dykstra (2013, 14), Lilla Frederick (2012, 13), Kim Hill (2012, 13), Kelley Larsen (2014, 15), Racich (2012, 13), Ross (2012), Becca Strehlow (2014) and Kellie Woolever (2014, 15). Hill stands as the first, and to date only, student-athlete to earn AVCA All-American first team honors in both indoor and sand volleyball in a single season. . Last season, the Waves worked a position in the field of eight for the inaugural NCAA Beach Volleyball Championships in Gulf Shores, Ala., finishing 5th overall. The Waves enter the 2017 season with a 85-13 record.

MATTHIES – Nina Matthies’ retired from coaching the indoor game following the 2013 season and finishes her 31-season run with a career record of 590-343 (.632). In the span, Matthies led the Waves to 10 conference championships and 20 NCAA Tournament appearances. She is by far the WCC’s all-time winningest coach and is a 10-time WCC Coach of the Year. Matthies was among the world’s top players and is a member of the Beach Volleyball Hall of Fame and in 2015 was inducted into the AVCA Hall of Fame and earned the USA Volleyball’s All-Time Great Female Beach Player award. In 2009, Dig Magazine rated her and former partner Linda Hanley as the second-best women’s beach team of all time. She won two AIAW national championships as a player at UCLA. In 2013, she was honored by her peers as the inaugural winner of the AVCA Sand Volleyball Coach of the Year award. She enters the 2017 beach season, her sixth at the helm, with a 85-13 record. She will be assisted this season once again by Marcio Sicoli, along with second-year volunteer coach Gustavo Rocha.

SICOLI – Marcio Sicoli is in his sixth season assisting Nina Matthiesin the sand, after spending six season with her as assistant indoor volleyball coach. Sicoli is highly lauded for his approach to training and served as head coach for Misty May-Treanor and Kerri Walsh Jennings during their gold-medal run at the 2012 London Olympics as well as the Walsh Jennings and April Ross bronze medal run at the 2016 Rio de Janeiro, Brazil Olympica. Sicoli also served as the assistant coach for the Brazilian Olympic Women’s Beach Volleyball Team from 2000 to 2004. In 2004, his team of Adriana Behar and Shelda Bede took home the silver medal in Athens. He currently serves as coach to 2016 Olympic hopefuls Walsh Jennings and April Ross.