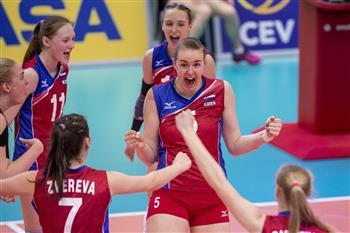 The U18 Girls' World Championships will be underway beginning on August 18, ending on August 27. Current Photo via FIVB

How The Teams Qualified

From Asia, Japan, China, Korea and Thailand earned their bid to the event, all from the 2017 Asian Girls’ U18 Championships. Japan took the top spot in the competition, while China came in as the runner-up. Korea took down Thailand in the bronze medal match to earn their bids.

All six European teams qualified at the 2017 European Girls’ U18 Championships. Russia claimed the title over Italy, while Belarus, Serbia, Slovenia and Germany ended the competition from third to sixth, respectively.

Argentina gained their bid to the competition by being the host country. Brazil and Peru enter the World Championships after competing at the 2016 South American Girls’ U18 Championships, as winner and runner-up, respectively.

Colombia made their way into the tournament after competing in the 2017 Girls’ U18 Pan American Cup.

For the NORCECA Confederation, the Dominican Republic and the United States earned their bids through the 2016 NORCECA Girls’ U18 Championships as winner and runner-up, respectively. Cuba and Mexico participated in the 2017 Girls’ U18 Pan American Cup, earning their bid through this tournament.

Turkey and Poland didn’t have to compete in an event to make it to the World Championships, as they were selected in through their World Ranking.