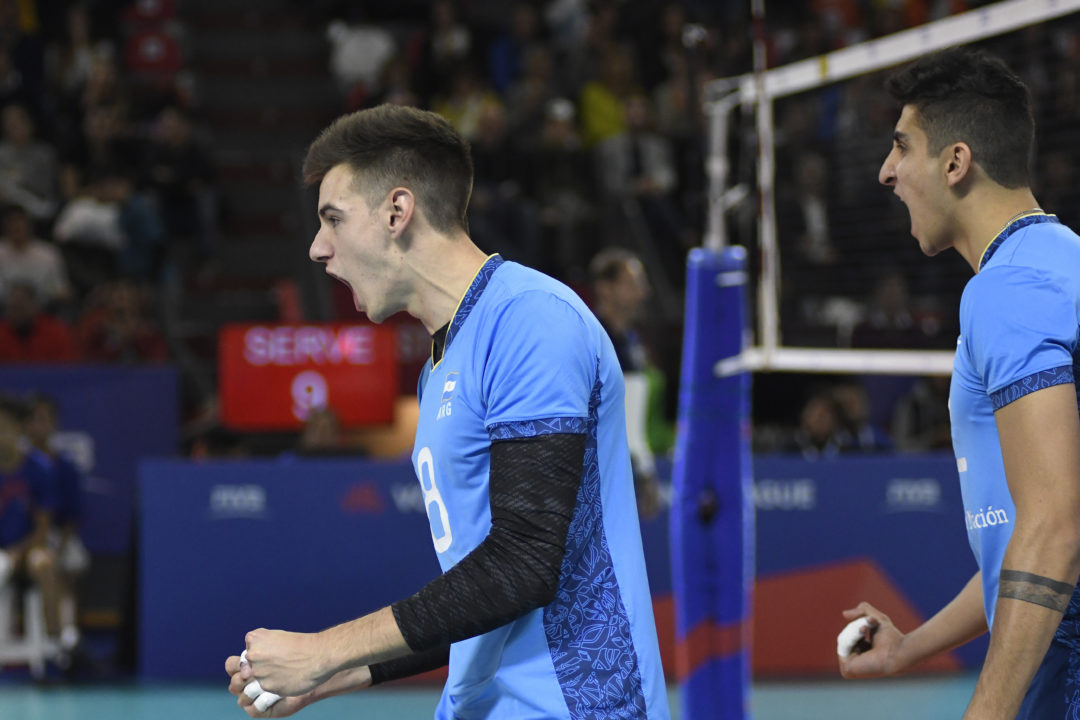 The 20-year old Loser led a breakout by Argentina's block on Friday, the 3rd of a 3-match sweep over the Americans men. Archive Photo via FIVB

The finale of the series shifted back to Morón, where the Americans quickly sprinted out to a 2-0 lead. But, in a little bit of revenge from the teams’ matchup in the Nations League earlier this summer, Argentina fought back, winning the next 3 sets (including the last 2 in fairly dominant order) to take the sweep.

The Americans actually had a much higher hitting percentage (48% vs. 42%) than Argentina, but most of that came up front, in the first set where the Americans had 15 kills on just 25 swings as a team.

The American service also looked better early than it had in the prior two matches through 2 sets, with 6 aces and just 7 errors in those frames. The service receipt was drastically improved too, with 65% and 53% positive in the first and second sets, respectively (41% and 42% excellent).

Things unraveled in the 3rd, though, where the American serve-and-receive game fell apart. They had just 1 ace to go with 8 service errors in the set, while their excellent receipt percentage dropped in half from 42% to 21%.

Things didn’t improve much from there, with 0 aces and 5 service errors in the 4th set, while Argentina remained consistent with 7 aces and 11 errors in total in the match.

Argentina, meanwhile, came alive, with a 62% hitting percentage in the tie-breaking 5th, while the Americans struggled to put a ball down (they had 5 kills, but also had 4 shots blocked, in the last set alone).

That Argentina block was the best its been throughout the matches. In the first game on Wednesday, the US out-blocked Argentina 8-3. In the 2nd, the two teams each had 8 blocks. In the 3rd on Friday, Argentina put up a whopping 16, with the Americans recording 10. That includes 5 blocks from Agustin Loser, part of 16 total points for the 20-year old undersized 6’4″ (193cm) middle blocker. Loser had 9 blocks total in the 3 matches of the series. Loser also hit 77% with 10 kills and no errors on 13 swings.

Sebastian Sole, who didn’t play in game 2, had 15 points for Argentina, and hit 71% with 10 kills on 14 swings. Argentina ran most of their lineup through in the match, and almost all played well, with the primary exception being veteran 33-year old Jose Luis Gonzalez, who led the team in scoring a day earlier. On Friday, Gonzalez had only 8 kills, with 4 kills on 16 swings, 3 errors, and having 2 of his shots blocked.

The Americans, after experimenting with different combinations of players in their first two matches, settled on a roster for game 3 that seems to be the best performers from the first two days. The same 6 players (and libero) started all 5 sets, which is a rarity for U.S. men’s teams until late in tournaments.

That starting lineup saw Micah Ma’a at setter, Kyle Ensing at opposite, his Long Beach State teammate TJ DeFalco and Brendan Sander at opposite, Mitch Stahl and Jeff Jendryk at middle blocker, and Michael Brinkley at libero. With some debate at both the libero and setter positions, this was probably the best lineup that this particular American squad, which has a few “A listers” combined with mostly training-team players and top-level collegians, could put together.

Ensing at opposite scored 22 poinis, recording 20 kills on 48 swings (42% hitting) with 3 errors and 6 shots hit into the block. He also scored a point on an ace, but also 6 service errors to go with it. Sander, the only field player to start all three games this week, scored 13 points with 10 kills (also hitting 42%) and 3 blocks. Across 3 matches, he scored 43 total points, including 7 blocks and 5 aces.

Out of the middle, Stahl didn’t record any blocks, but did hit an uber-efficient 79%, tops on the team, with 2 aces. TJ DeFalco scored 15 (he also hit 42%) and had the best service day of the team, with 3 aces and 3 errors. DeFalco has the most USA National A Team experience on this roster, and that primary level also struggles with service, so DeFalco’s progress there is a welcome sight. This summer, he had 6 aces and 27 service errors.