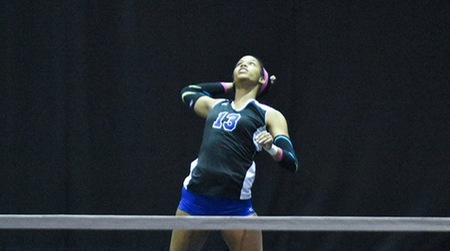 Florida Atlantic will have quite the newcomer for 2018 after landing the 2017 AVCA Two-Year College Player of the Year, Massiel Matos, from Miami Dade College. A 6’0″ pin player, Matos will be a junior in the fall with two years left of play and is immediately eligible.

In total for her two seasons at Miami Dade College, Matos helped the team win 55 games compared to just five losses en route to back-to-back NJCAA National Championships. She also won the Player of the Year award in both of her seasons as well as earning All-American honors. In total for her sophomore season, Matos logged 368 kills (3.68 per set) on a .306 hitting percentage, 231 digs (2.31 per set), 63 aces (0.63 per set) and 55 blocks (0.55 per set). She also notched 4.72 kills per set as a freshman.

Below is also the video of Matos winning the award and being presented with it along with a quick interview:

A native of Higuey, Matos also plays with her home country of Dominican Republic internationally. As part of the team she won the NORCECA U-20 Continental Championship and was named the tournament’s best server and right side. In the country she also attended Santa Teresita High School for her prep career.

“We are extremely excited to welcome Massiel to the FAU family,” Florida Atlantic head coach Fernanda Nelson said in the team’s release of the addition. “She will bring a lot of experience and intensity to the program right away. She is a phenomenal player, but more importantly, a great person.”

Florida Atlantic is coming off of a 19-9 season in 2017 in which they finished 9-5 as a member of the Conference USA. Matos joins a group with four other players who can fill the role of outside hitter for FAU as she looks to carve out early playing time and make a similar impact to her previous stop.