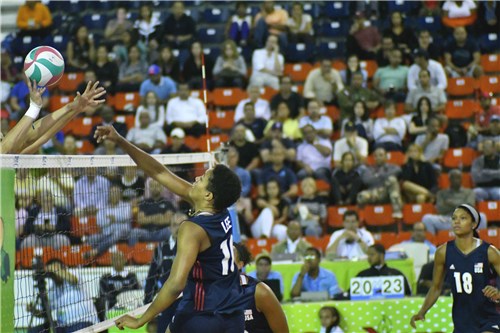 Cuba carried the momentum from Monday's five-set win over the United States to a sweep of Trinidad and Tobago on Tuesday. Meanwhile, the Americans bounced back with a sweep of Group B leader Puerto Rico to claim the pool title with 11 points. Current Photo via NORCECA

Cuba carried the momentum from Monday’s five-set win over the United States to a sweep of Trinidad and Tobago on Tuesday. Meanwhile, the Americans bounced back with a sweep of Group B leader Puerto Rico to claim the title with 11 points.

Twenty-eight T&T miscues and a slight edge in every other statistical category helped Cuba to its second straight Pan Am Cup win.

“We had a bad outing against Puerto Rico but last night the girls found their game against the United States,” Cuban coach Wilfredo Robinson said. “Today they defended well.”

“I didn’t like the first set,” Trinidad coach Francisco Cruz said. “They were self-pressed by the uniform of Cuba. They played better in the second and third sets with good defense and blocking. I can’t ask for more knowing the conditions they are going through.”

The United States bounced back from Monday’s loss with a decisive win over Puerto Rico to claim the top spot in Pool B.

The difference in the match came in blocking and serving. The Americans boasted a 12-1 lead at the net and a 9-3 edge from the service line. Both teams accumulated 32 kills and just one point separated the teams in errors (22-21 in favor of the USA).

“We came prepared for Puerto Rico,” USA captain Lauren Carlini said. “I am really proud of my team, who took care of business.”

“It was a good match for the first two sets,” Puerto Rican Daly Santana said. “In the third we had problems with the reception.”

The teams were tied at 17-all in Set 1, before the Americans broke away with a 5-1 run en route to the 25-22 win. Six blocks were key for the USA in the stanza. Puerto Rico thwarted to set point tries before a Lee putaway ended it.

Puerto Rico scored the first three points of Set 3, but fell behind due to a 7-0 USA run and never recovered in a 25-14 loss. The Puerto Ricans could not get out of their own way in the stanza and traied by as many as 10 at 21-11, before putting together a 3-0 run. A pair of Ogbogu points and an overpass kill by Lee gave the Americans a match-point try at 24-14. Ogbogu closed out the final 4-0 run and the match.

With the win, Team USA advanced to the Pan Am Cup quarterfinals.