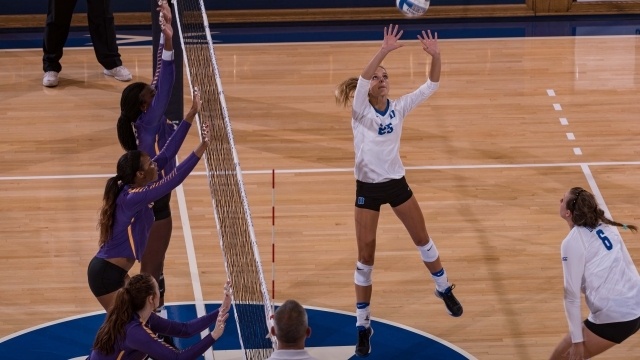 There are a large number of colleges that picked up transfers in the offseason, adding some collegiate experience to their... Current Photo via Duke Athletics

There are a large number of colleges that picked up transfers in the offseason, adding some collegiate experience to their rosters. Arizona State, Bradley and USC were among the teams that bring in a lot of transfers for the 2017 season.

Arizona State had an influx of players leave their program this offseason due to a coaching change, meaning they had the room to bring in some new faces from players of other colleges. Of these players, Peyton Grahovac was one that decided to make the switch from Long Beach State. After two seasons with LBSU, the middle blocker decided to take her talents to the Pac-12. One transferring out is Mmachi Nwoke, who will spend her final three NCAA seasons with Kansas as a middle blocker.

Two players from ASU will move to NC State, following their assistant coach, Linda Hampton-Keith. BreElle Bailey and Kylie Pickrell make the cross-country move to compete in the ACC.

For USC, they are picking up four players from across the country in setter Cindy Marina from Duke. The move for Marina brings her back to her home state of California. In 2016, Marina played in every set for the Blue Devils, amassing 11.11 assists per set, being the only ACC setter to average more than 11.00 assists per set. In addition, Marina plays with the Albanian National Team.

Of course, we know we missed some transfers along the way, so if you have a commitment or transfer to report, please send an email with a photo (landscape, or horizontal, looks best) and a quote to [email protected]

Note: Click different tabs at the bottom of the spreadsheet to see lists so far from other classes.

Scroll right on the sheet to find a link to stories we’ve written about many of the athletes who have committed.

Click on the link here to view the full spreadsheet.