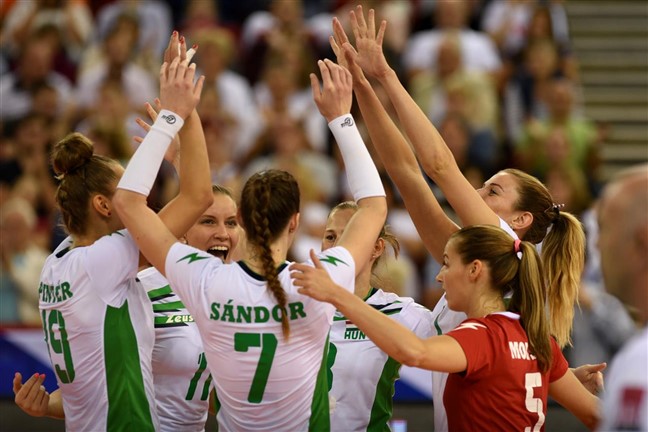 Hungary and Bulgaria earned semifinal victories to clinch a bid to the 2018 FIVB Women's Challenger Cup and a spot in the finals. Archive Photo via CEV

The two winners of the semifinal matches not only secured a top two finish but also locked in a bid to the 2018 FIVB Volleyball Women’s Challenger Cup – which provides a chance at making the 2019 Volleyball Nations League.

Bulgaria was the stronger team in pool play among these two, and carried that into the Final Four with a quick sweep of the Finnish side by a total of 75-48. Beyond sending Bulgaria to the Gold Medal match, they got the most important part of the tournament done as they have now clinched a spot in the 2018 FIVB Volleyball Women’s Challenger Cup that takes place in a week.

Neither team found much success with aces or failure with serve errors, as instead the match was determined with the Bulgarian block (11-4) and spike (46-27). Not to mention that Bulgaria had a 52% execution rate to 27% from Finland – which ties back in to the block effecting the offense.

Individually, Bulgaria saw six players score with all at six or more points. That was led by Silvana Chausheva (14 points), Gergana Dimitrova (13 points) and Nasya Dimitrova (13 points). For Finland, Pauliina Vilponen (10 points) led the way and will look to continue her play in the bronze medal match tomorrow.

In the second semifinal on the day, Hungary upended Czech Republic in front of their home crowd – which may have been a huge difference. The win locks in Hungary to a spot in the 2018 FIVB Women’s Challenger Cup, while the first loss of the tournament coming at a tough time pushes the Czech side to the third-place match tomorrow.

Hungary was the aggressor in the serving game, and although the aces and serve errors combined favored the Czech side, the pressure kept the losing side out of system more often. That contributed to a 44-36 edge in kills to favor the home crowd who also had the better block (10-7).

Helping to carry the team in that regard were Greete Greeting (21 points) and Renata Sandor (18 points), who amazingly combined for 34 kills whereas Czech Republic had just 34. In fact, no player on the Czech side eclipsed a dozen points as the duel threat was enough for Hungary to advance on.