#21 UCLA Bounces Back with Sweep of Oregon State 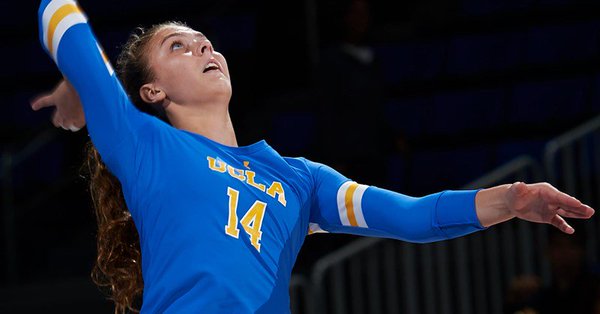 UCLA bounced back from an historic and surprising sweep at the hands of Oregon on Friday with a sweep of Oregon State on Saturday.  Current Photo via UCLA Athletics

UCLA bounced back from an historic and surprising sweep at the hands of Oregon on Friday with a sweep of Oregon State on Saturday.

The Bruins cleaned up an error riddled offense, hitting .308 against the Beavers, including two set efforts of .300 or better.

Mac May led all hitters with 13 kills for the Bruins to go with seven digs and a .323 hitting effort. Alexis Light added 10 putaways, while Kyra Rogers and Jenny Mosser chimed in with eight apiece. Rogers hit at a team-best .538 clip, while Mosser added 14 digs and three blocks.

Maddy Gravley managed 11 putaways and five blocks to pace Oregon State. Maddie Goings (7) and Lindsey Schell (6) were next on the team. Goings also pulled up a team-high 13 digs alongside libero Grace Massey.

UCLA raced out to a 7-2 lead in Set . The Beavers battled back, rallying to within one three times, last at 16-15. The Bruins took over from there with a 6-0 run, including two May putaways and two OSU miscues. The teams traded points over the last six serves with UCLA taking the stanza at 25-18 on its second attempt (25-18).

Set 2 was a repeat of the first to start with the Bruins going up 7-2 early and Oregon State catching up at 7-6 and 10-9. UCLA scored five in a row to pull away, three on OSU miscues. The Bruins pushed ahead by eight at 20-12 on back to back kills by Rogers and never looked back in the 25-16 win.

The Beavers took control early in Set 3, leading 7-4 as Gravley turned in three kills and Goings added two. Down 11-8, UCLA put together a 4-0 run to grab the lead at 12-11 on a Rogers ace. Two Madeleine Gates blocks and three May putaways boosted the Bruin advantage to four at 20-16. UCLA scored five of the final eight to close out the night. A block by Mosser and Gates gave the team its first match-point try at 24-18 and Light finished the job at 25-19.