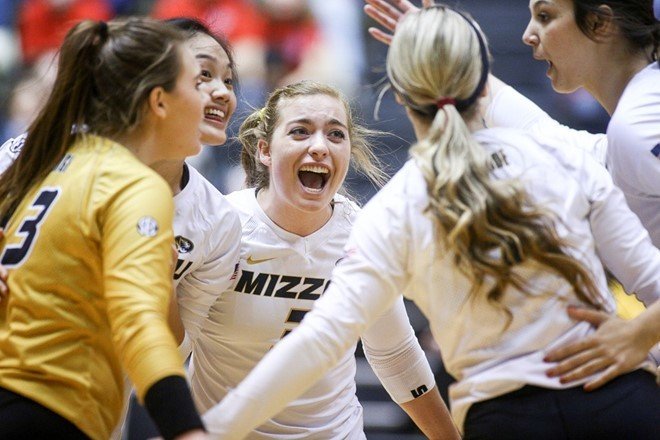 An overwhelming 22-kill performance from Melanie Crow led the 25th-ranked Missouri Tigers to a 3-1 win over the Auburn Tigers on Friday in Columbia. With the win, Missouri remains with just 2 losses in the conference, which sets up a huge matchup with 14-1 Florida on Sunday with the winner sitting in poll position for the SEC title.

Crow’s kills total wasn’t a season high – it’s the 3rd time she’s had 22 kills, to go with a 23-kill output against Auburn a month ago. It was, however, easily her highest hitting percentage, at .362, in four 20+ kill games this season. She also chipped in 9 digs and 2 blocks for the Tigers.

Junior setter Courtney Eckenrode picked up her 5th double-double of the season as the team’s lone setter with 45 assists and 11 digs on the day.

Auburn came out hot in the first set, with Brenna McIlroy recording 8 kills in the first set as Auburn caught the Tigers off-guard early. The Tigers were able to keep her at bay for the rest of the day though, where in the final 3 sets she had just 5 kills and 9 errors.

Carly Kan had 8 kills and 15 digs for Missouri. The Tigers have varied her role frequently this season – she’s taken as many as 60 swings this year in a 4 set match (a loss against Texas A&M), but generally speaking the Tigers have had more success when they’ve been able to play her off the net and make her a bigger part of their back row defense. In both of Missouri’s SEC losses this season, Kan has led the team in attacks (although in one of those games, against A&M, they were without Crow, forcing Kan into a bigger role offensively).

Junior Courtney Eckenrode (The Woodlands, Texas) stepped up at setter on Friday evening, tallying 45 assists and 11 digs. It marked her fifth double-double of the season, including her seventh 40-plus assist match of the year.

After a disappointing first set, Mizzou rebounded in a big way with three consecutive set victories. The black and gold Tigers tallied 16 kills on .342 hitting in the second set, followed by an outstanding 14 kills on .444 hitting performance in the third set.

Mizzou concludes its weekend with a key SEC matchup against No. 5 Florida on Sunday, Nov. 20. First serve at the Hearnes Center is scheduled for 3 p.m. (CT).

Freshman Gwyn Jones tied a career high in kills for AU, having 16 on the night. Sophomore Brenna McIlroy had 13 kills in the match, while senior Breanna Barksdale chipped in 10.

Junior Alexa Filley recorded her team-leading 18th double-double of the season, finishing with 35 assists and a match-high 16 digs. McIlroy picked up her 11th double-double for the Tigers this year, adding 14 digs. Junior libero Jesse Earl finished with 14 digs and classmate Kelly Stewart led the team with two service aces.

A strong swing from McIlroy triggered a five-point Auburn run, putting the away team ahead at 8-3 in the second. Mizzou responded with a long run of its own and took the lead, 12-11. The teams exchanged points before an MU rally pushed the home Tigers up at 20-18. Mizzou closed out the set with four-straight points, winning 25-20.

Kills from Barksdale and Bidzane tied set three early at 4-4 before strong swings by freshmen Bidzane and Jones pushed AU ahead, 7-6. Mizzou errors gave Auburn the advantage, 11-7, but the home team battled back to tie the set at 13. After swapping sideouts, Missouri pushed a 6-1 run to take a 23-18 lead and the home squad captured the set, 25-19.

Mizzou found itself up 8-5 in the fourth before kills by Jones and McIlroy and a Tate Pember ace made it 13-12 for the visitors. Reece and Bidzane chipped in a kill each to push Auburn ahead at 18-15, forcing a MU timeout. The home team responded with a 9-0 run to earn match point and Mizzou took the match with a 25-19 win.

Auburn returns to Auburn Arena Sunday, Nov. 20, for a 1:30 p.m. CT match vs. South Carolina. The Tigers and the Gamecocks will face off on SEC Network+ and admission is free.