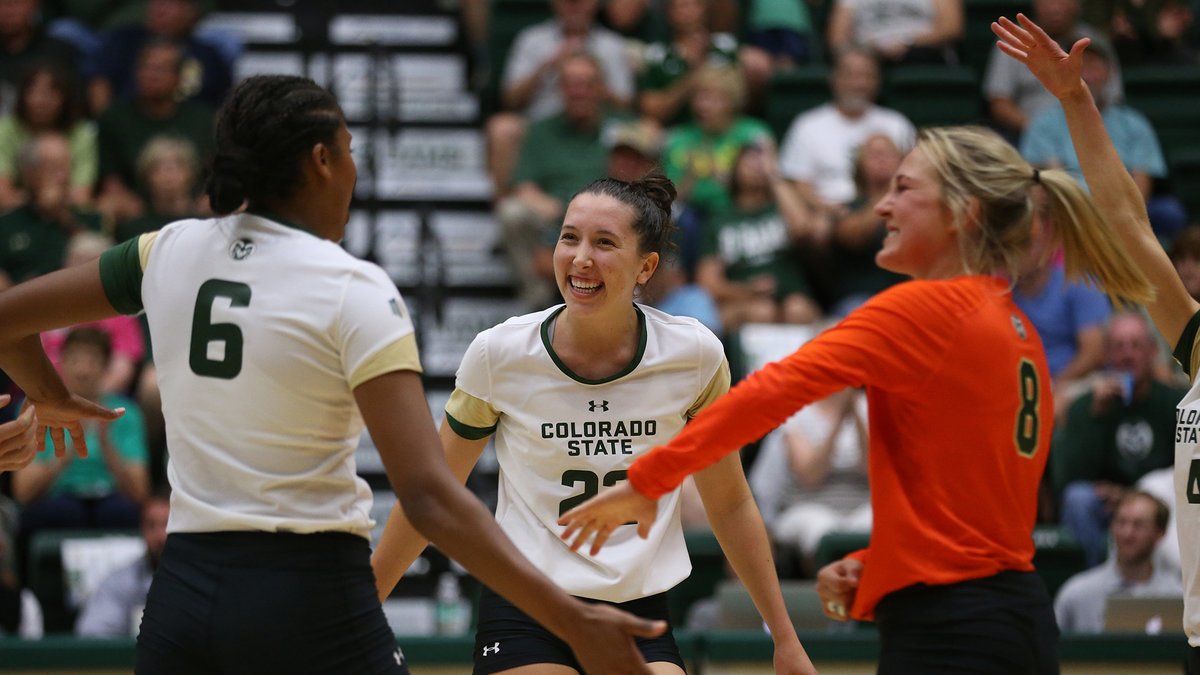 With 13 kills and .600 hitting, Sanja Cizmic led the #23 Colorado State Rams in a border battle sweep of the Wyoming Cowgirls  Archive Photo via Colorado State Athletics

Laramie, Wyoming – In their first Mountain West conference road test of the season, the #23 Colorado State Rams defeated the Wyoming Cowgirls 3-0. The Rams, currently ranked fifth in the nation in hitting percentage, were led by senior opposite Sanja Cizmic who managed 13 kills on .600 hitting while adding 9 digs.

For the Cowgirls, sophomore outside Halie McArdle led the team with 9 kills, while sophomore outside Tara Traphagan added 7 kills and 4 blocks. In her first start as libero of the year, senior Lily Austin tallied 12 digs.

In the opening set, the teams traded points early until the Rams went on a 10-2 run to win the first 25-17. The Rams maintained control at the start of the second set and were up 18-14. The Cowgirls fought back to get within 1 point at 19-18 before Colorado State called a timeout. Ram’s outside Jasmine Hanna notched 3 kills in her team’s last 6 points to lead Colorado State to a 25-21 win.

Coming out of the break, the Rams dominated in the third set with an early 7-2 lead. They kept the Cowgirls to a .056 hitting percentage in the third and won 25-13 to sweep the Cowgirls in the border battle match.

LARAMIE, Wyo. – The No. 24 Colorado State volleyball team trailed 15-13 in the first set before constructing a 12-2 run to take the set and went on to sweep Wyoming on Tuesday night in Mountain West volleyball. The Rams move to 13-2 overall and 3-0 in conference play.

Both Rams’ outside hitters Sanja Cizmic and Breana Runnels led the attack as Cizmic led with 13 kills and Runnels with 11. Both hit very efficiently finishing over a .500 clip. Katie Oleksak paced the offense with 34 assists, while also adding four blocks and nine digs. Paulina Hougaard-Jensen recorded six stuffs and McKenna Thornlow and Cizmic contributed nine saves.

The Rams started the match trailing as the Cowgirls jumped out to a 5-4 lead. Wyoming would continue to control the match and led 15-12 before Colorado State flipped a switch. CSU would go on a 12-2 tear down the stretch and take the set 25-17.

The second frame started with both teams fighting for the lead as the set was tied at 11-11. The Rams again put together small runs to keep the advantage, but Wyoming kept the set close – keeping CSU to a one-point lead at 20-19. Colorado State finished the set off with a 5-2 run to take a 2-0 match lead with a 25-21 score.

Following the break, it was all Colorado State as the Rams built big leads at 5-1, 16-5 and 20-6 in the final frame. CSU secured its third conference victory and sweep, winning the set 25-13.

Colorado State will stay on the road and head south to Air Force on Saturday for a 1:00 p.m., match.

“We just played really consistently in the sign-out game and held off some pretty good play by Wyoming in the beginning of the first and second sets. As it got to the end of sets, we kind of wear them down and they made some mistakes and we didn’t. I thought our outside hitting was very good. I know Jasmine’s (Hanna) numbers were incredible, but she was very patient, she got kills when we needed to. Breanna (Runnels) was awesome. Sanja (Cizmic) was awesome. Kate (Oleksak), when those people get hot she continues to give them the ball. We need to have more middle attacking, but we will.”

On the outside hitters…

On putting together runs at the end of sets…

“We were very good at the end of sets and we were able to string points together and that made the difference.”

“I look at our team and know we have great pieces,” Cowgirl head coach Chad Callihan said. “I have to give both teams credit, it was well-played volleyball early on to begin with. We know that we can take an error if we’re being aggressive, but I just felt later in the sets we would make a few too many costly mistakes. This was not the best week for us. It was a tough week and with being in the middle of four matches in eight days, there are definitely things that we know we need to stay focused and work on. That is exactly what we’ll do.”

Sophomore Halie McArdle led the Cowgirls with nine kills, while fellow sophomore Tara Traphagan launched seven put-aways of her own, in addition to four blocks. Hitting .300 during the match, junior Reed Copeland added five kills to go with four total blocks. Junior Emily Lewis and freshman Marissa Harmon each recorded four kills for UW. Harmon also added 24 assists, while senior Lily Austin led the team with 12 digs. It was the first match this season Austin posted a team-high in digs. Sophomore Madi Fields chipped in with six digs against CSU as well.

CSU outhit the Brown and Gold .297-.154 and also maintained the upper hand in total blocks (8.0-6.0), assists (38-30) and digs (39-31). Austin and senior Marley Taylor each recorded a service ace for Wyoming, but ultimately ten service errors proved to be too costly against Colorado State.

The opening set was a tight contest to begin with. CSU never held more than a one-point lead until after the media timeout. From that point on, the Rams offense took over. Colorado State would take eight of the last ten points to take the set, 25-17. McArdle, Traphagan and Harmon each posted two kills for Wyoming.

Again a close match to start, which featured ten ties before the media timeout. Copeland had two kills to swing momentum towards Wyoming and keep CSU from distancing themselves. CSU called timeout down one, 18-19, before a 6-3 run gave them the set, 25-21. McArdle had a team-high four kills to go with three digs in the second stanza, as Austin recorded eight.

The final set unfortunately got out of hand quickly for Wyoming. The Cowgirls called a timeout down 9-3 before CSU used five kills of their own and five attacking errors from UW in part of an 11-5 run. Two kills each from Traphagan and McArdle kept the Brown and Gold around, but CSU took the set 25-13 and the three-set sweep.

The Cowgirls will hit the road for a Thursday night matchup at Air Force before traveling to Utah State and Boise State next week. The contest with Air Force is set for 6:30 p.m. MT.