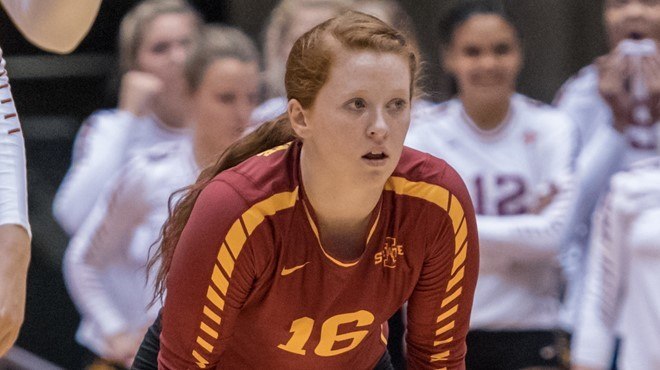 Iowa State’s defense may have been the difference in the match, as not only did Hali Hillegas record 30 digs, a whopping 10 per set, but they out-blocked the Shockers 14.5 to five. That front row defense helped limit Wichita State to a .184 hitting percentage while Iowa State hit .228.

The Cyclones did win each set, but were tested in all three. The furthest of the trio was the first, when Iowa State came out on top 25-21 behind a .455 hitting percentage.

Set two saw an incredible end result, ending at 37-35 in extra points in favor of Iowa State. Neither team could pull away and as soon as one earned a set point chance, the other would either tie or switch the set point opportunity to themselves. There were 19 ties and nine lead changes in the second set alone, as eventually Iowa State scored the final three points in the game.

The way that the second set ended may have deflated Wichita State’s morale a bit to start the third, as Iowa State jumped ahead 7-4. A 7-1 Wichita State response though changed the lead as the two teams battled back and forth to the finish. Eventually Iowa State earned a two point lead, and put away match point at 25-23 for a road sweep.

Both setters put up strong numbers as Monique Harris logged 46 assists, nine digs and three blocks for Iowa State while Emily Hiebert netted 48 assists, eight digs and four kills for Wichita State. The liberos were on their game as well as besides Hillegas’ unbelieveable numbers, Giorgia Civita collected 26 digs.

In terms of the blocking defense, Alexis Conaway led Iowa State with six and was assisted by Avery Rhodes (five), West (four) and a trio of others with three blocks in Iowa State’s strong play at the net.

Beyond earning some resume-building wins this weekend, Iowa State also claims the Shocker Volleyball Classic Title. They’ll use the momentum to ride into Big 12 play as they face Oklahoma on Saturday. Their counterpart, Wichita State, starts AAC play for the first time since joining the conference, with Temple and Connecticut this week.

The Cyclone effort was led by Tournament MVP Jess Schaben, who had 16 kills on the afternoon. She was joined in double figures by Samara West(13 kills) and Grace Lazard (10). In the backrow All-Tournament Team honoree Hali Hillegas had 30 digs, while Alexis Conaway had 11. Monique Harrisalso earned All-Tournament honors with 46 assists, nine digs and three blocks.

Set One: Iowa State 25 Wichita State 21
Starting the match in a 5-1 offense, the Cyclones and Shockers used strong offense to keep each other in range, with the largest lead being two in the first half of the set. Wichita State’s 13-11 advantage was the last time either team would have a multiple point edge until 22-20, when Genesis Miranda fired an ace to put the Cyclones ahead by a pair. Avery Rhodesand Jess Schaben stuffed Abbie Lehman to bring up set point, which was put away on first asking when Schaben put away a WSU overpass to make it 25-21 Cyclones.

Set Two: Iowa State 37 Wichita State 35
Wichita got the first three points of the set, which ISU knotted back up at 5-5, but pushed back ahead to 12-7 by blocking Schaben. The Cyclones chipped away, and were eventually let back into the set via a 4-0 run capped by a Schaben kill to knot it up at 18-18. Samara West continued to power the ISU offense, before the breakthrough finally came via an Izzy Enna ace to move ahead 23-22. The marathon set ensued from there, as ISU had to fight off nine Wichita State set points, eventually taking the set to 35-35. ISU got its fourth chance at set point on an Avery Rhodes kill, and finally ended the set when Jess Schaben won a 50-50 at the net at 37-35.

Set Three: Iowa State 25 Wichita State 23
The Cyclones got out stronger of the two teams, powering their way to an 8-4 lead, but the Wichita State block stepped up with a 7-1 run to push the home side ahead 11-10. ISU trailed 16-14, but ran off a 7-1 run guided by back-to-back triple blocks by Monique Harris, Grace Lazard and Schaben to make it 21-17 Iowa State. Wichita State kept battling, cutting the Cyclone advantage to one at 23-22, but ISU got to match point at 24-22. The sweep was wrapped up when Abbie Lehman fired wide to make it 25-23 Cyclones.

Up Next
Iowa State begins Big 12 play on Saturday at Hilton Coliseum against Oklahoma. First serve between the Cyclones and Sooners will be at 4 p.m., with Cyclones.TV Powered by Mediacom broadcasting the match.

Mikaela Raudsepp led the Shockers with 19 kills, while Tabitha Brown added 13. Emily Hiebert had 48 assists and Giorgia Civita had 26 digs. Raudsepp and Civita were both named to the all-tournament team.

SET 2:
• The Cyclones outlasted the Shockers 37-35 for a set two win
• ISU fought off nine set points in the win
• The Shockers took an early 13-8 lead after a kill from Raudsepp
• ISU used a 4-0 run to tie it at 18
• The two teams traded points after that with WSU reaching set point at 24-23 on a kill from Brown
• The Shockers had eight more set points, but could not capitalize
• ISU closed out the set with three-straight kills for the 37-35 win
• Raudsepp and Brown each had seven kills in the set, while Civita had 12 digs

NEXT MATCH:
• The Shockers are next in action on Fri., Sept. 22 when they open up American Athletic Conference play at Temple in Philadelphia, Pa.