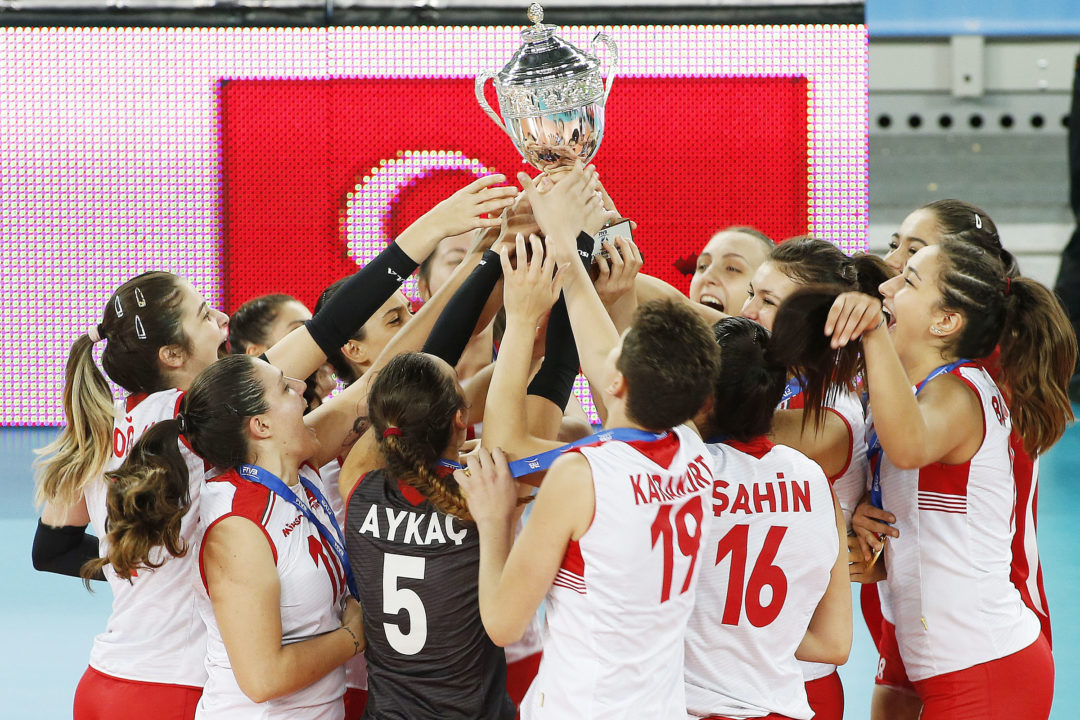 Just like captain Çagla Akin promissed, the Turkish squad stopped Slovenia’s Cinderella run to take home the gold medal. As the tournament came to an end, we saw the rise of volleyball’s new stars, and the fall of relevant powerhouses. Is this the beginning of a new era in the international scene? How much more we’ll see of these Turkish, Slovenian, Bulgarian and Dominican girls in the future? Surely, we only hope for them the best.

Below, you’ll find FIVB’s recaps and videos from all of the day’s action.

Turkey pounded Slovenia from the service line to deny the hosts any kind of play as they sailed to a 4-0 (15-12, 15-11, 15-13, 15-8) sweep. Turkey, who improved on their previous best of silver in the 2015 edition at home in Ankara, created all sorts of problems to Slovenia’s reception above and beyond their nine direct aces (to Slovenia’s none). This helped the block immensely to provide a total of eleven stuffs (to Slovenia’s five).

Ebrar Karakurt was practically unstoppable at 60% (12/20) in attack and the blocking duo of Beyza Arici and Asli Kalac brought in three stuffs each to carry the well-rounded Turkish side. It was Slovenia’s first defeat in the tournament. Turkey had lost in pool play to Brazil (though they still topped their pool).

Slovenia tried to react in the third set, taking an early lead, but eventually Turkey caught up at 12-12 and was first to reach set point at 14-13 on a kill from the middle by Asli Kalac that left libero Maja Pahor gasping for air. A double block by Hande Baladin and Saliha Sahin on Iza Mlakar finished it off in the very next rally. Failing to find any way to counter Turkey, Slovenia collapsed in the fourth as the Balkan side cruised to overall victory.

The President of the Republic of Slovenia, Borut Pahor, was amongst the fans who cheered on the home side, waving the country’s special flag that carries the signatures of all the top sports personalities of Slovenia.

Turkey coach, Ataman Guneyligil: “We played the final like a final should be played. In some of rotations we did some mistakes. We recognized them immediately and found the solutions. And then we went ahead playing our game. I can’t put my feelings into words, I am so happy. I would like to thank my players and my federation. I am so happy!”

Turkey captain Çagla Akin: “We played with a lot of patience and waited for the opponent to make mistakes. I said before that Turkey was back. We showed this on court today as well. I am really proud of my team, coaches and staff. Thank you so much for making our dreams come true.”

Slovenia coach, Alessandro Chiappini: “The biggest problem today was that we left the Turks to play their game. We didn’t put any pressure and they started to play better and better. We just couldn’t fight the way back. I am still very proud of my girls. This is a great result and it’s very important for this team as a push forward to the senior category. If my players will reamain with this spirit, they will become a great team.”

Slovenia outside hitter, Lana Scuka: “We really wished to win this match and take a gold. But we were too nervous and the wish was probably to big. We just couldn’t play as we usually do. Second place is still great achievement, but right now we are still disappointed.”

Bulgaria outclassed the Dominican Republic 4-2 (12-15, 15-8, 15-11, 16-18, 15-11, 15-9) to earn the bronze medal of the 2017 FIVB Women’s U23 World Championship. With 16 points from Silvana Chausheva, 15 from Gergana Dimitrova and 13 from Miroslava Paskova, plus a wonderful performance from libero Zhana Todorova, Bulgaria proved to be too much of a match at the net for the Dominicans, who relied too much on Gaila Gonzalez to bring in the points (18 in total for top scorer of the game). It is Bulgaria’s best finish in the history of the competition after 7th place two years ago in Ankara. It is also the first time that the Dominican Republic fail to make the podium, after silver in 2013 and bronze in 2015.

Things could have been a bit easier for Bulgaria, but a few too many unforced errors when they led 12-8 in the fourth allowed the ‘Queens of the Caribbean’ to turn it around, reach set point at 13-14 and tie the overall score at 2-2 after a total of five set points.

Bulgaria captain, Gergana Dimitrova: “Reaching the bronze medal game was the best what we could do and give. I don’t know for how many years we’ve gone without a medal. So this is just fantastic. We came here to take a medal and we did it. Our goal is achieved.”

Bulgaria coach, Antonina Zetova: “The match today was very difficult, because our girls, this generation, are not used to play such important games. I am happy for them, because the last medal we won was at the European Championship 17 years ago. And our women’s teams never got a medal at a World Championship. It’s important for the girls, because of all of the work we did this summer. I am very satisfied and very happy.”

Dominican Republic coach, Wagner Pacheco: “We wanted to win, but we just couldn’t. Bulgaria played really well and I think we also played well. But my girls still had in their minds that we lost one of our main players yesterday. I am still very satisfied with what we achieved. For this generation of girls this championship was very important.”

Dominican Republic captain, Yokaty Perez: “We were hoping to play well and win, but we weren’t showing it in the court. The Bulgarians did. They fought for every ball, but we didn’t. The team which fought more won today.”

Brazil took revenge on Cuba for their unexpected pool loss by thundering past the Caribbean in straight sets (15-12, 15-6, 15-8, 15-13) to capture the fifth position. It is the second-best result for the South Americans after their seventh rank back in 2013 and their gold medal campaign two years ago in Ankara, Turkey. For Cuba, on the other hand, finishing sixth means a huge improvement compared to their ninth and eleventh rank in 2013 and 2015, respectively. Middle blocker Mayany Souza scored ten points for the winner side, including two block kills and two aces. Captain Drussyla Costa added nine kills for Brazil. Heidy Casanova – once more – finished on match-high 13 points for Cuba. The South Americans outserved their opponents 9-1.

There was little excitement in today’s second match at Hall Tivoli, as Cuba apparently had run out of steam after their fantastic performances so far here in Slovenia’s capital Ljubljana. Brazil quickly took command and never looked back until the end of the match.

Brazil coach Wagner Coppini: “Our pool match against Cuba was kind of a reflection of the match against Bulgaria that we lost the day before. Today we finally managed to forget what happened and regain our forces. We played much more focused today. I believe my team could have done better than the 5th place. We were very well prepared. The match that turned our game upside down was the match against Bulgaria. In that match something broke and we could not fix it.”

Brazil captain Drussyla: “We played very well today. We had a good strategy and duly followed our game play. However, we expected to move through to the semifinals. Unfortunately, we lost the last two pool matches against Bulgaria and Cuba. Today we played our game again.”

Cuba coach Wilfredo Robinson: “Today our serving was weak and that caused us a many problems in our game. The girls just could not focus and play their game. However, we are happy; we improved our final ranking compared to the previous tournaments.”

Cuba captain Diaris Ramos: “We committed too many errors today. We just could not play our game. It happens a lot that when we are behind, we stop fighting. We have to find a solution for this challenge in the future. I am happy that we finished on the 6th place but not satisfied.”

China captured the seventh position following their 4-2 (14-16, 12-15, 15-4, 16-14, 15-3, 19-17) victory over Thailand. Despite their 4-2 triumph over Thailand, China could not confirm their first (2013) and fifth place (2015) from the two previous competitions. Thailand, on the other hand, equalized their eighth rank from 2015, which was their first appearance in a women’s U23 world championship competition. Meili Song came out as top match scorer with 16 points followed by Xiaoqing Cai with 13. Thailand’s Thanacha Sooksod contributed 15 points as the best for the losing side.

Two sets down, China recovered from a lazy start to turn the tables in the beginning of the third set. Thailand continued to build on their outstanding defense but lacked of height and power in the counter attacks. The key moment of the match came in the fourth period with China rallying back after a 2-7 deficit. Thailand coach Chamnan Dokmai exchanged setters in the beginning of the fifth set but could not prevent China from pulling trough.

China coach Wu Sheng: “We committed too many errors in the first two sets as the players started nervously. Gradually they regained focus. I take full responsibility for the team’s performance at this championship. The main reason lies in the fact that we had little time to prepare as the national games were taking place in China. That’s why our result here is also worse than in the previous editions.”

China captain Long Cheng: “We started the match very slowly. Thailand put a lot of pressure on us in the first two sets. Luckily, we managed to regain momentum in the next four sets. It was very important for us to end the tournament on a high note. We have learnt a lot from these matches and that is a good thing and it was a nice experience.”

Thailand coach Chamnan Dokmai: “My team played very well in the first two sets. We made too many mistakes in the next sets, mainly in serving and receiving. China took the advantage of this and eventually won. Three of my key players moved to the senior team this year. If I had them in the team here, we maybe could have gone higher in the rankings.”

Thailand captain Tichaya Boonlert: “In the first two sets we played well. China committed many mistakes. In the last four sets, we lost concentration and discipline in the game. This was the reason why we finally lost the game.”