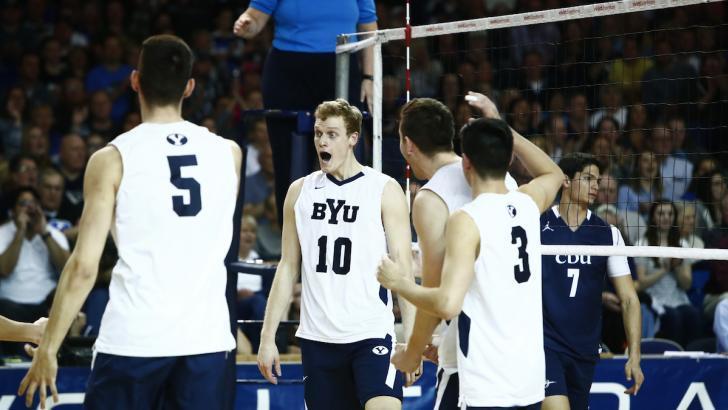 Jake Langlois (#10) had his best game of the season in a 3-0 sweep of #9 Pepperdine. Archive Photo via BYU Photo

The 3rd-ranked BYU Cougars sealed their spot in the 2017 MPSF volleyball tournament on Saturday with a 3-0 sweep over #9 Pepperdine on the road. BYU was without All-American opposite Ben Patch for the 8th-straight game on Saturday – a run that has seen the Cougars lose just 2 sets in spite of his absence. His coach says that Patch is ‘making strides’ in his return from a groin injury, but still isn’t able to return to the court.

No matter for the Cougars, they got another big performance from senior Jake Langlois, who’s been leaned on more heavily in Patch’s absence and has responded well. In his latest outing, Langlois had a season-high 19 kills and 3 block assists for a season-high 21.5 points. After he hit .444 against Pepperdine on Friday, the Cougars threw him 10 extra passes on Saturday, and he responded with one of the best games of his career.

“This was a great weekend for our team,” BYU head coach Shawn Olmstead said. “Pepperdine is a phenomenal program, and I’m proud of our guys battling both Friday and Saturday night to get two wins here on the road. It was a great effort from our entire team. I loved our ability to focus when we really needed to sideout or score a point.”

Langois’ day ended the same way as the Cougars’ did – scoring back-to-back kills to end the 3rd set in overtime.

A young Pepperdine team hit very well at .302 for the game, led by sophomore Michael Wexter with 15 kills and redshirt-sophomore David Wieczorek with 11. But they had no answer to Langlois at the net with only 5.5 team kills.

BYU also served very well with 5 aces on just 5 errors. That’s the Cougars’ fewest service errors this season, and the first time they’ve had better than a -4 aces-to-errors output.