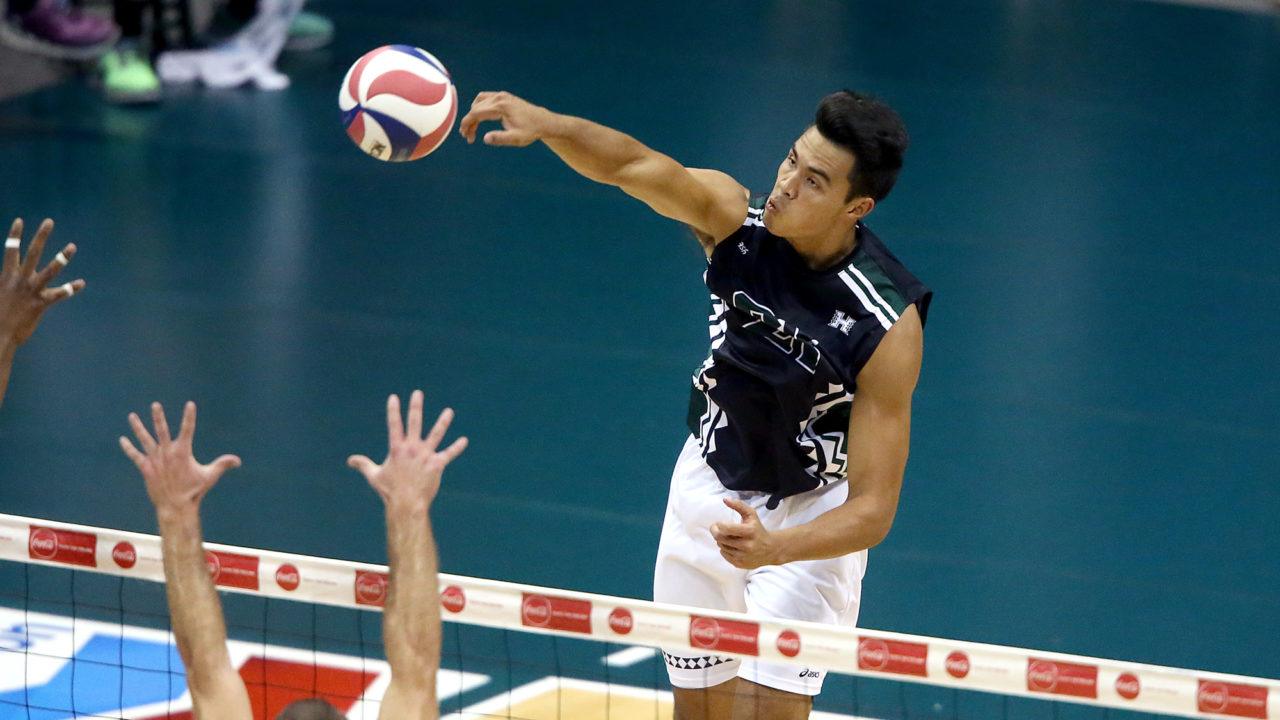 The University of Hawaii men’s volleyball team had a huge night on Saturday in front of 5,439 fans at the Stan Sheriff Center. They broke records, they hit key benchmarks, and most importantly they have assured their spot in the MPSF tournament and kept their chase for an NCAA title alive.

Hawaii swept #8 Stanford for the second-straight night on Saturday, which pushed the Warriors to a school-record 32nd consecutive set win dating back across 10 consecutive 3-0 victories. In total, Hawaii has 15 straight wins and now 20 total on the season for the 9th time in program history.

Hawaii’s nation-leading block led the way with a whopping 13 in just 3 sets, led by 5 from Patrick Gasman and 4 from Kupono Fey. Fey led all scorers on the day with 13 points thanks to 11 kills (.381 hitting). That’s a season-best blocking number for the senior outside hitter, as he matched the kill output of his star opposite Stijn van Tilburg (11 kills, 2 errors, .450 hitting percentage).

Hawaii’s seniors have been playing very well over the last few games, and if that continues, their depth could be the biggest threat to upset the defending champions from Ohio State.

Stanford was led by Clay Jones, who had 10 kills on the day, and Kevin Rakestraw, who had 7 but no errors on 10 sings. After a run of good performances, Gabriel Vega struggled with just 7 kills and 9 errors on 30 swings (-.067 percentage).

Hawaii will get a huge test next week when they travel to Provo, Utah for a pair with #3 ranked BYU. Those results will go a long way toward deciding seeding for the MPSF tournament.

HONOLULU – The University of Hawai’i men’s volleyball team continued its dominance and record-breaking streaks after a straight-set win over No. 8 Stanford, Saturday in the second of two Mountain Pacific Sports Federation matches at the Stan Sheriff Center. Set scores were 25-13, 25-19, 25-20.

The Rainbow Warriors (20-2, 10-2 MPSF) broke the program-record for consecutive sets won, extending the streak to 32 with their 10th straight 3-0 victory. UH also tied the school-record with its 19th straight home win, reaching a mark that was last set in 1989. The win was also UH’s 15th straight overall and 10th straight in league play.

The win clinched a playoff spot for the Warriors, who will participate in the MPSF Tournament for the sixth time under head coach Charlie Wade. It also gave UH its 20th victory for the ninth time in program history and second time in the last three seasons.

Sophomore opposite Stijn van Tilburg and senior outside hitter Kupono Fey each tallied 11 kills to lead the Warriors. van Tilburg hit .450 and had six digs and two blocks while Fey hit at a .381 clip along with three digs and four blocks.

UH’s nation-leading block, tabbed the Manoa Roofing Co., tallied 13 on the night, including a career-high six by freshman middle Patrick Gasman and five by setter Jennings Franciskovic, who also dished out 32 assists and led UH to a .370 hitting percentage.

The Warriors broke the sets streak in Set 1. UH doubled-up the Cardinal, 10-5, behind three blocks and made it 16-6 after a 9-1 run that included six unanswered points. UH went on to hit .500 in the set with van Tilburg and Fey each chipping in with four kills.

After a tight start to the second set, the Warriors’ block came alive with three stuffs during a four-point run and an 11-8 lead. Two more blocks, including a solo roof by Jennings Franciskovic gave UH a 19-13 advantage and the Warriors rolled to a 25-19 win.

Hawai’i jumped out to a 7-3 lead in Set 3 with four straight points including back-to-back stuff blocks by Gasman. The lead was 14-6 after five straight points, three by way of Cardinal hitting errors. The match ended anticlimactically as Stanford coach John Kosty challenged a net violation.

The Warriors will next travel to No. 3 BYU for a critical two-match MPSF series Friday, March 17 and Saturday, March 18 in Provo, Utah.

Hawai’i was led by Stijn van Tilburg and Kupono Fey, who combined for 22 of the team’s 42 kills. The Rainbow Warriors won their 19th straight match at home and 14th consecutive match at home.

Stanford returns to The Farm next weekend to host No. 9 Pepperdine on Saturday, March 18 at 5 p.m. in Burnham Pavilion.