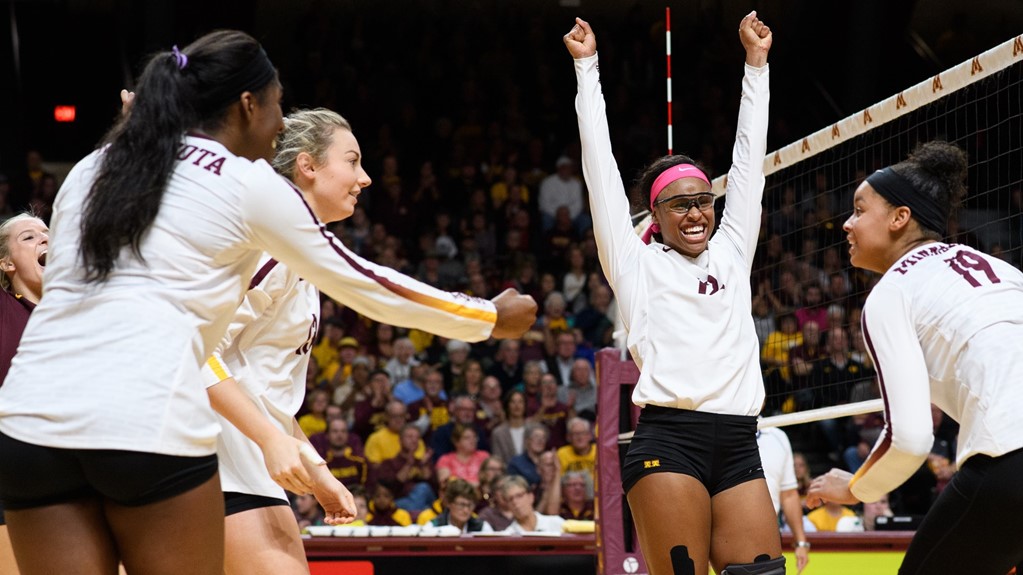 After a knock-down, drag-out first set in Ann Arbor on Saturday evening between #3 Minnesota and #14 Michigan, it was all Minnesota in the last two sets as the Gophers remained undefeated in Big Ten play. With the win, the Gophers remain 2 losses ahead of Penn State (who are on a 9-game winning streak) in the conference standings this season.

Minnesota threw a balanced attack at the Wolverines with 4 players having double-digit kills. That was led by redshirt junior middle blocker Taylor Morgan, who had 13 kills and just 1 error in 19 swings for a .632 hitting percentage.

She also contributed 4 block assists and 1 solo block to Minnesota 14-block team effort. Michigan, meanwhile, didn’t record a single block in the match. The Wolverines, in spite of their lofty ranking, have been vulnerable at outside hitter. They came into the weekend ranked 13th out of 14 teams in the Big Ten with just 2.01 blocks/set. While they had a season-high 12 team blocks in 5 sets against Wisconsin on Friday, the 0-fer on Saturday means that average will drop when the stats are updated on Monday.

Minnesota was led in the block by redshirt sophomore middle blocker Regan Pittman, who had 6 block assists and 2 solo blocks along with 10 kills (1 error, 18 swings, .500) in the match.