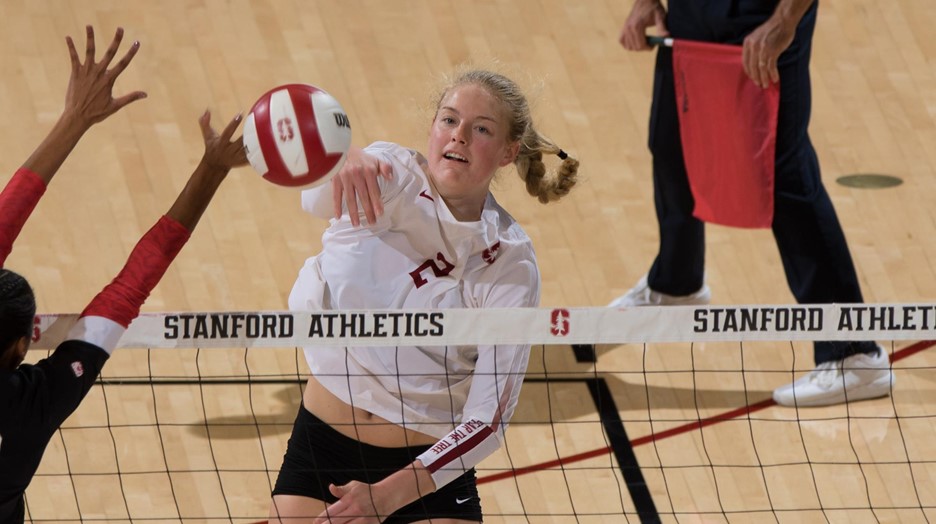 #3 Stanford made quick work of Colorado State in the Palo Alto pod. The Cardinal will host the regional next weekend, starting with Wisconsin. Current Photo via Stanford Athletics

#3 overall seed Stanford finished off the Palo Alto pod with a dispatching of Colorado State in just over an hour of match time. Stanford now gets the opportunity to host the regional semifinals and finals next weekend. Stanford hosts Wisconsin in the Sweet 16, who knocked off #14 Iowa State in straight sets. The match-up against Wisconsin is a rematch of the regionals last year, when Stanford had to come back from being down 0-2 to knock off Wisconsin in Madison in five gruelling sets on their way to the title. Also, Stanford became the fifth team from the Pac-12 Conference to make the Sweet 16 this season.

In what was supposed to be an intriguing match-up of two highly-efficient offenses, Colorado State picked the worst match to have their worst efficiency output, hitting .085 in a straight-set loss to Stanford. Colorado State made very few unforced errors; of their 19 attack errors, 16 were blocks by Stanford. In contrast, Stanford only had 7 hitting errors, 2 of which were blocks by Colorado State.

Stanford was led offensively by Kathryn Plummer with 14 kills, hitting .600. She also contributed 6 blocks and 5 digs in the win. Tami Alade had a match-high 8 blocks. Those 8 blocks were more touches on the ball than she was set (3-0-6) on the night. Setter Jenna Gray ran the efficient offense (.486) with 35 assists, 7 blocks and a match-high 4 aces. Audriana Fitzmorris, the kills leader from the night before, finished the match with 8 kills and 7 blocks of her own. Libero Morgan Hentz had a match-high 11 digs.

Colorado State looked lost on the evening and could not get anything going. Jasmine Hanna, in her last match as a Ram, could only muster 2 kills (2-3-16) and 2 blocks on the evening. The Rams were led by Kirstie Hillyer with 9 kills. Hillyer also was in on both of CSU’s two blocks and produced the Rams’ only ace on the night. Breana Runnels finished with 8 kills. Mountain West Player of the Year Katie Oleksak finished with 24 assists and a team-high-tying 6 digs. Libero Amanda Young led the team with another 6 digs.