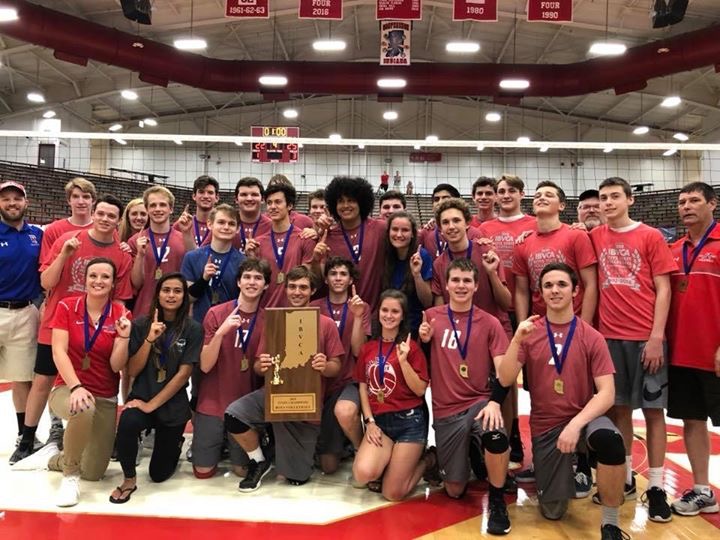 INDIANAPOLIS, Ind. – It was ten years in the making, but the wait made it that much sweeter.

“The win just validated what we’ve been trying to do for the past 10 years, building from the grade school level to build smarter high school players,” said head coach, John Kesterson.

Indeed they did. The smaller Roncalli squad played much smarter than the more physical Cathedral squad, a 9-time state championship winner in their own right. Roncalli was led by 5’11” middle Blake Powell with 11 kills and 8 blocks.

“We’ve been a middle-driven offense all year, but our pin hitters can take over a match,” continued Kesterson. “When Cathedral tried to take out our middles, the pins took over. When they switched to (commit to) the pins, our middles dominated.”

Their pins were as dominant as advertised, with 6’6″ junior opposite Zach Straumins adding 10 kills to the offensive fray, including a kill on championship point. Senior outside hitter Kyle Carpenter added 9 kills.

Roncalli prides themselves on their serve receive and defense to stay in matches against bigger teams. However, their efficiency paved the way—-51 kills and only 10 hitting errors, with 7 of those errors coming via the block.

Kesterson added, “It (the efficiency) started with our passing. Our back-row passing was lights-out. We were in system most of the match.”

Junior libero Austin Hendricks proved as much; he finished with a match-high 18 digs. With the aforementioned passing and exceptional floor defense came 44 assists from 6′ junior setter Sam Eiland.

“This really was a team effort,” said Kesterson. “The senior players all suspended their egos and dedicated everything to each other. I’ve never coached a team that supported each other like this group. They pushed each other every day to be the best, but never got down on each other.”

Another very true statement. The MVP of the tournament, senior middle Nick Williams, wasn’t even in the top three in kills on his own team in the championship match, but was the driving emotional force for a Rebel squad that had gone to the state championship match four times previously, three of which were losses in 5 sets.

Roncalli graduates 6; Powell, Carpenter, Williams, second outside hitter Michael Frausto, right-side defensive specialist Shane Moylan and backup opposite Ben Asdell. All six have received offers to play at the next level, but they all accepted academic scholarships over their athletic offers. Coach Kesterson states that there are juniors and sophomores who are receiving a good deal of interest to play at the next level. With their JV program also taking top honors in the state, Roncalli plans to reload for 2019.

For more information about Indiana Boys High School Volleyball, please go to ibvca.com for all information. You can also see all of the history of the 25 years the IBVCA has been in place, as well as this past season’s results.