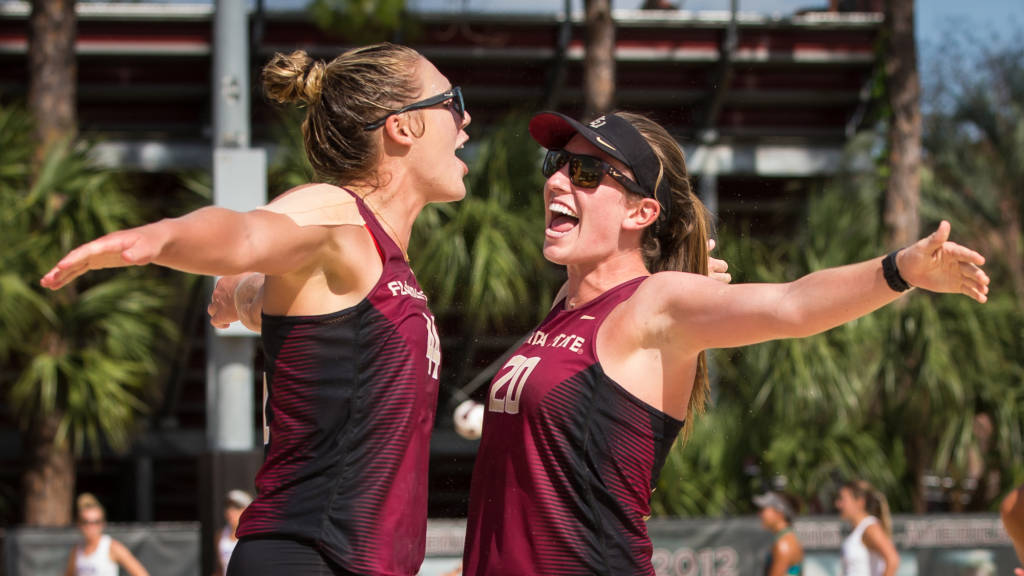 Leigh Andrew and Brooke Kuhlman won at the #1 line and led Florida State to a big win over #2 Pepperdine. Current Photo via Florida State Athletics

The Florida State Seminoles have been solid so far this season, winning the games they were supposed to win, and even with a few signature victories like a 3-2 victory over Hawaii on March 17th.

But against the top 3 teams in the country, USC, Pepperdine, and UCLA, they’ve been unable to break through for a signature victory that might indicate a return to the NCAA championship games was possible. That is, until Friday night, where the ‘Noles topped #2 Pepperdine 3-2 at home.

Before Thursday’s win, Florida State was a combined 8-21 in sets (0-7 in matches) against the three aforementioned teams.

See Florida State’s press release about the victory below:

The Noles picked up third-set victories on Courts 1 and 2 within a minute of each other to edge the Wave in the seventh meeting all-time between the two beach volleyball powerhouse programs. FSU avenged a 3-2 loss to the Pepperdine from earlier this season on March 12 in Manhattan Beach, Calif., and continued its incredible 24-match undefeated streak at home. The Noles are 24-0 all-time in dual matches at the Seminole Beach Volleyball Complex.

“Last time we played Pepperdine it was just as close,” Florida State head coach Brooke Niles said. “We grinded out a little better at the end. I told them before the match to expect every match to go 16-14 in the third set, so I think they were mentally prepared in for the long run.”

Florida State will look to take the momentum from its historic victory into Saturdaywhen the Noles will play three matches, beginning at 9 a.m. against Grand Canyon before facing FIU at 11 a.m. The Seminoles will cap their final home tournament of 2017 with a second match against the Wave at 4 p.m. FSU will honor its three seniors, Leigh Andrew, Sierra Sanchez and Julia Thompson, and hold a ring ceremony for its 2016 CCSA Champions before the final match.

The win over Pepperdine also gives Florida State at least one victory over every program it has ever faced since beach volleyball (then called sand volleyball) first became a collegiate sport in 2012.

“The top courts have been a battle for us all year,” Niles said. “We are such a good point scoring team that if we get frustrated if we don’t score points. This match was really won on our side of the court and side out. We have done a really good job focusing on that this half of the season.”

The Seminoles split with the Wave in the first flight, as redshirt freshman Eva Torruella and redshirt junior Hailey Luke won 21-16, 21-18 on Court 5, while redshirt junior Katie Horton and sophomore Nikki Esposito fell 22-20, 21-10 on Court 4. Torruella had 14 kills and three blocks in the win.

The second flight began with the match knotted in a 1-1 tie, and Florida State captured first set victories on all three courts.

On Court 3, junior Victoria Paranagua and sophomore Macy Jerger won the first set, but dropped the next two, ultimately falling to Pepperdine’s No. 3 pair of Skylar Caputo and Heidi Dyer, 19-21, 21-18, 15-10, to give the Wave a 2-1 advantage.

The top two pairs for the Noles and the Wave battled back and forth in a match that was similar to the teams’ first meeting – only with a better result.

Junior Vanessa Freire and freshman Francesca Goncalves took the first set on Court 2, 21-16, before dropping the second set, 21-19, to Pepperdine’s No. 2 duo of Corinne Quiggle and Brittany Howard. In the tie-breaking third set, the Noles jumped out to an 8-3 lead and held off a Wave comeback attempt to win 15-11 and tie the match at 2-2. Freire had five blocks in the match and had the game-winning kill, while Goncalves tallied 22 kills.

“I think it was point by point,” Freire said. “We were trying not to get too ahead of ourselves, realizing the game was on our shoulders. We were just focusing on our side of the court, getting a clean shot and pushing every point.”

With Freire and Goncalves battling on Court 2, FSU’s No. 1 pair of graduate senior Leigh Andrew and sophomore Brooke Kuhlman were in their own nail-biter with Pepperdine’s top pair of Delaney Kudsen and Madalyn Roh, taking the first set 21-19 before dropping the second set, 21-16. Andrew and Kuhlman were ahead early in the final set, taking a 7-3 lead, but Pepperdine fought back, moving within a point, 14-13, just as FSU was tying the match 2-2. The Noles picked up the final point to win the match with Andrew driving home a powerful kill to end the match and give FSU the 3-2 win.

“This win is awesome,” Andrew said. “It feels so good. To win at home and beat them and hopefully get a better seed in the NCAA tournament. We going to celebrate this win, but we will be back at it again tomorrow.”

Florida State will take a 19-6 record into Saturday’s second day of the tournament. Pepperdine suffered just is second loss of the season, falling to 19-3 in 2017.

The Seminoles finish up Alumni Weekend Saturday with matches against No. 9/10 Grand Canyon (9 a.m.), No. 14/12 FIU (11 p.m.) and another match against No. 2/3 Pepperdine (4 p.m.) on the Seminole Beach Volleyball Courts. Lives stats for tomorrows matches will be available at Seminoles.com. Admission to the Seminole Beach Volleyball courts is free of charge and parking will be in the Spirt Way Garage just next to the courts. Fans can also follow the Noles on Twitter (@FSU_BeachVB), Facebook (facebook.com/FSUBeachVB) and on Instagram (@FSUBeachVolleyball) for updates from this weekend’s matches.

Pepperdine’s recap of the events:

Pepperdine (19-3) posted a solid effort in both matches, starting the day with a 5-0 sweep over Stetson (17-11) after tabbing three two-set wins and two three-set wins.  The Waves then went down to the final court in action against Florida State (19-6), eventually dropping the dual with three three-set matches played.

Shortly after, sophomore Anika Wilson (Santa Barbara, Calif./San Marcos HS) and freshman Deahna Kraft (Seattle, Wash./Garfield HS) battled through a 28-26 and 23-25 first two sets into a third.  In the final set, the pair went point-for-point with Carly Perales and Sunniva Helland-Hansen en route to a 18-16 win to put the Waves in a position to clinch.

Pepperdine’s No. 3-pair Skylar Caputo (Manhattan Beach, Calif./Mira Costa HS) andHeidi Dyer (San Clemente, Calif./Saddleback Valley Christian HS) were up to the task and made quick work of Tiffany Creamer and Rachel Noble with a 21-12, 21-13 final mark to clinch the match for the Waves and leave two courts in action.

Roh and Knudsen finished first with a two-set 21-13, 21-14 victory over Kristin Lind and Darby Dunn to put the Waves up 4-0.  After a three-set bout, Quiggle and Howard put down Kaylee Anderson and Emily Carroll with a 21-15, 19-21, 15-8 final line to close out the first match of the day with the sweep.

In the second match, the Waves split the opening flight with Wilson and Kraft striking first on court four.  The Pepperdine duo defeated Katie Horton and Nikki Esposito with a 22-20, 21-10 final result to open the day with a Waves’ win.  The opposition then took a two-set victory on court five to tie the match.

In the second flight, all three matches extended to three-sets.  The Waves No. 3-duo, Caputo and Dyer, finished first after battling back from a 19-21 first set loss to win the second 21-18.  The pair then downed Victoria Paranagua and Macy Jerger 15-10 in the final set to put the Waves up 2-1 in the match.

Quiggle and Howard went down 16-21 in the first set, but bounced back for a 21-19 win in the second.  In the third despite a strong effort, the pair was downed by Vanessa Freire and Francesca Goncalves with a 15-11 score to tie the overall match 2-2 and put all eyes on court one.

Roh and Knudsen fell 19-21 in set one, but rallied for a 21-16 second set win to push the match to a third set.  The pair went neck-and-neck with Leigh Andrew and Brooke Kuhlman in the third set, but the opposition had the hometown-edge and picked up a 15-13 win to clinch the win for the Seminoles.

The Waves cap off the regular season tomorrow, April 15, with a match against No. 14 Florida International at 10 a.m. and a rematch with No. 4 Florida State at 1 p.m.  Follow @WavesBeachVB for updates and check on PepperdineWaves.com for full results, recaps and more!