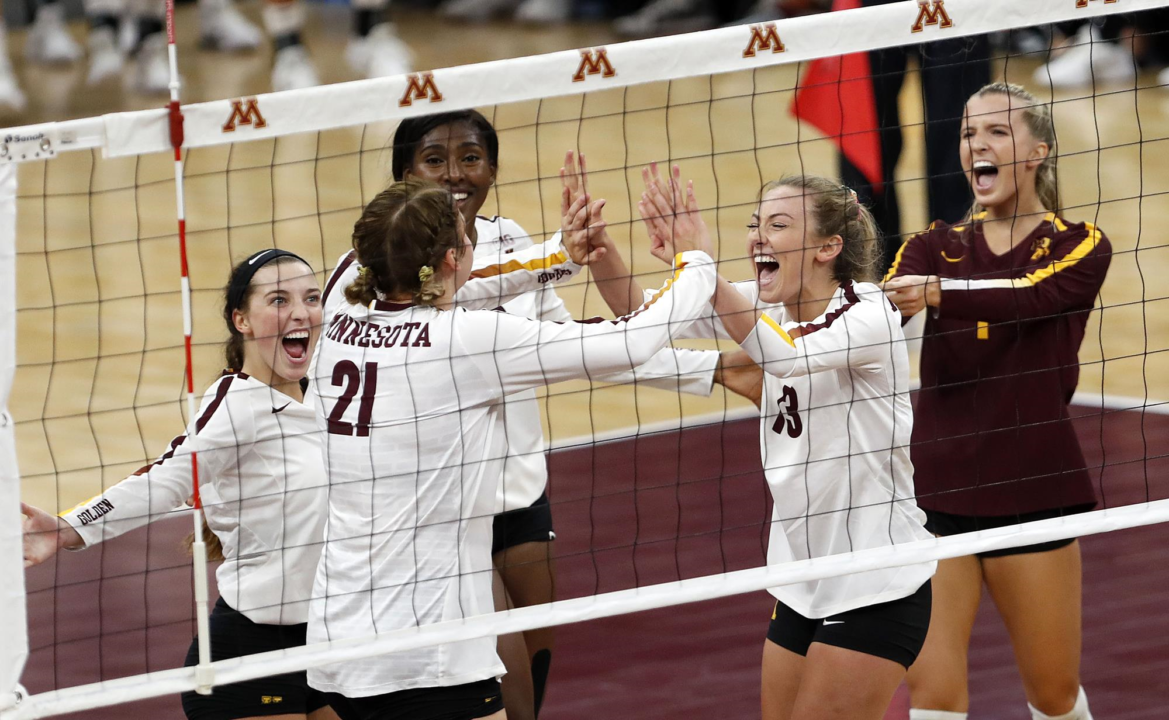 No. 4 Minnesota picked up its seventh straight win with a 3-1 victory over No. 3 Nebraska with help from a .280 hitting effort, four aces and a 14-kill advantage.  Current Photo via Minnesota Athletics

No. 4 Minnesota picked up its seventh straight win with a 3-1 victory over No. 3 Nebraska with help from a .280 hitting effort, four aces and a 14-kill advantage. The victory gives Minnesota sole possession of the top spot in the Big Ten standings at 6-0.

No. 5 @GopherVBall visits Lincoln and steals a win from No. 3 Nebraska. 🏐 pic.twitter.com/2kBye8mSfI

Nebraska, which had won 14 in a row since dropping its season opener and were 5-0 in the Big Ten coming into Saturday’s match, saw four players post double-digit kill tallies. Mikaela Foecke (16), Jazz Sweet (13), Lexi Sun (12) and Lauren Stivrins (10) made up the group with Stivrins pacing the team in efficiency at .450 and blocks (5). Sun rounded out a double-double with 15 digs, while Nicklin Hames added 44 assists and a team-best 18 saves.

Minnesota hit the ground running, going up 7-2 in Set 1, including three Morgan putaways and an ace by McGraw. Nebraska cut the margin to one at 13-12 with two kills and a block by Sweet. The Gophers called timeout and scored four in a row, on three Husker errors and a stuff by Rollins and Morgan. Two Foecke kills and three by Sun had Nebraska back within two at 21-19. Minnesota finished off the set on a 4-1 run, including a kill and a block by Morgan. A hitting error by Foecke gave the Gophers the win on their second set-point try.

Nebraska started Set 2 on a 10-5 run with help from three Foecke putaways. Down 15-12, Minnesota countered with nine of the next 13 points, including three kills by Rollins at two by Hart to make it 21-19. Back to back blocks by Callie Schwarzenbach kicked off a final 6-2 Husker push. A block by Sweet and Stivrins put Nebraska on the hill at 24-22. A putdown by Sweet gave the Huskers the 25-23 win and evened the match.

The teams tied seven times in Set 3, last at 9-all. Samedy served up three aces and had help from four Husker miscues in a 14-2 run, which made it 23-11. Stivrins notched a kill and a block as part of a 3-0 Nebraska run which extended the set. Samantha Seliger-Swenson and Regan Pittman came through to end the set at 25-14. Nebraska hit .030 in the set with seven miscues.

After splitting the first eight points of Set 4, Minnesota went up by five at 11-6 as Pittman and Rollins turned in two kills apiece. Rollins added two more putaways as the Gophers pushed ahead by seven at 18-11. Nebraska scored seven of the next 10 to slice the margin to three at 21-18, with kills by four different players. Two Samedy kills and a block by Rollins and Pittman gave Minnesota its first match-point attempt at 24-19. Stivrins chipped in a kill and a block to keep the match going before Seliger-Swenson closed the door at 25-21.