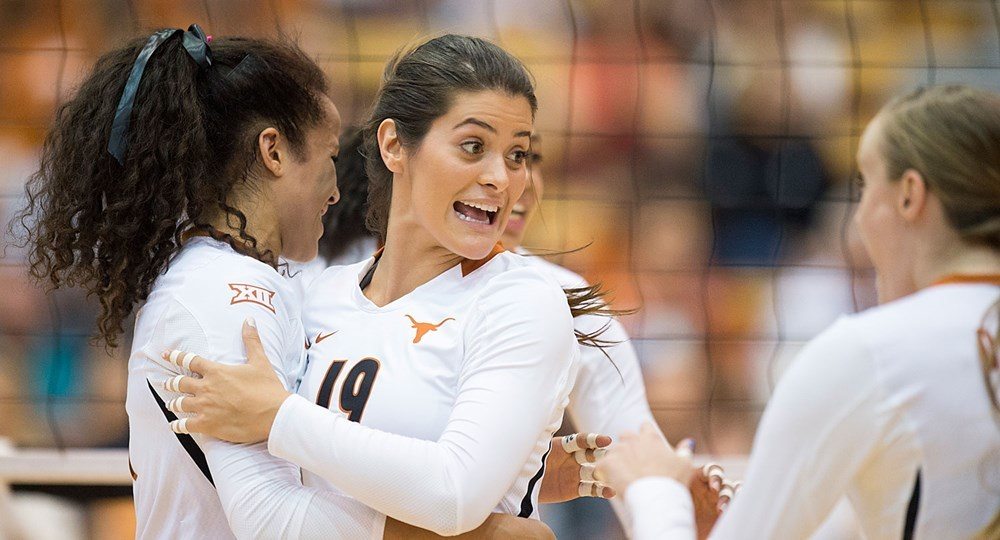 Iowa State put up an unexpectedly-good fight, but eventually succumbed to a relentless Longhorn attack as Texas won 3 sets to 2 on Saturday night in Austin.

Texas jumped out to a 2-0 set lead with a big offensive attack, including .571 hitting in the 1st set, but 3 service aces by Cat McCoy in the 3rd, as well as a diverse attack of their own, put the Cyclones on the board in set 3.

Texas suffered 9 errors in a sloppy set 4, that saw neither team hit higher than .128, which pushed the Longhorns to a second-straight five-set match.

“It has been great that we have been able to be in that position,” Texas head coach Jerritt Elliott said of the situation. “We have seen a little bit of our personality when it gets to game five. There’s a little more urgency.”

The Cyclones took the momentum into the fifth set with an early 3-1 lead, but Texas did not fold and went on a 4-0 run to take a 7-5 lead. The Longhorns stretched their lead to 9-6 on back-to-back kills from Prieto Cerame and did not look back, taking the set, 15-10 and the match, 3-2.

Jerritt said the team has some things to work on before they play Baylor on Wednesday. “We need to find an identity. Baylor is playing at a very high level right now. If we play like that, with that defensive mentality, it’s going to be a tough night for us. We just have to get in and watch some film and figure some things out.”

Both teams had 7 players with kills on the night. For Iowa State, the leaders were Jess Chaben with 15 kills on .213 hitting and Alexis Conaway with 12 kills on a .455 average.

Paulina Prieto Cerame had 16 kils for Texas but hit just .195 on the day. She was one of 3 Longhorns to hit for double figures on the day, alongside Micaya White (17 kills, .220 average) and Ebony Nwanebu (13 kills, .303 average). White and Nwanebu chipped in 7 block assists combined, part of an 11 team block effort for Texas.

White posted 17 kills, hitting .220 for her 13th-straight match in double-digits. She also had nine digs and three blocks for the Longhorns.

Senior Chloe Collins posted 46 assists and 11 digs for her fifth double-double of the season. She also had three aces, three kills and one block.

In the first set, the Cyclones went on a 5-0 run early, but the Horns fired back with a 7-0 run of their own to take a 12-7 lead. Texas kept the lead, not letting Iowa State within more than two and took set one, 25-21. The Longhorns hit .571, led by Prieto Cerame’s six kills.

In the second set, neither team led by more than two until the Cyclones went on a 4-0 run for a 15-11 advantage. Texas capitalized on errors to fuel its own 4-0 run to tie the score at 15, but ISU responded with three-straight points to take an 18-15 lead. Back-to-back kills from Prieto Cerame pulled the Horns to within one and Texas took back the reigns at 20-19, but ISU tied it once again at 21. The Cyclones survived three set points to tie it at 25, but an Iowa State error followed by a Collins kill gave Texas set two, 27-25.

In the third set, the Longhorns created some space with an early 7-1 run to lead, 10-6 and stretched it to 15-10, but Iowa State responded with a 4-0 run to pull within one. Texas maintained a lead until the Cyclones tied it at 18 and they tied four more times before Iowa State took a 23-22 lead and won the next two points to take the set, 25-22.

The Cyclones took the momentum into the fifth set with an early 3-1 lead, but Texas did not fold and went on a 4-0 run to take a 7-5 lead. The Longhorns stretched their lead to 9-6 on back-to-back kills from Prieto Cerame and did not look back, taking the set, 15-10 and the match, 3-2.

On their second five-set match in a row: It has been great that we have been able to be in that position. We have seen a little bit of our personality when it gets to game five. There’s a little more urgency.

On their problems in the third and fourth sets: We just aren’t playing at a high level. Emotionally, we are not there, we are disconnected as a group at times. They put it in cruise control and don’t make things happen and other teams pounce on that from the defensive side.

On winning the Big 12: We have a really special team, I think we can be really good. We need to figure out their identity and figure out what we want to be a part of. I know that we had some new players in there and I thought they did a nice job. We did some good things offensively, but defensively, it wasn’t as good. We just have to be able to play one game at a time and compete for that amount of time and execute at a high level. If we do that, good things will happen and that’s going to be the goal.

On what the team needs to work on before facing Baylor on Wednesday: We need to find an identity. Baylor is playing at a very high level right now. If we play like that, with that defensive mentality, it’s going to be a tough night for us. We just have to get in and watch some film and figure some things out.

On what contributed to her success as a middle blocker tonight: We ran a little bit of a higher ball for me and I was able to see the block pretty well. I think that helped a lot.

On playing the fifth set: For some reason, we didn’t have that urgency from the start. Obviously, the fourth set was a wake-up call and in the fifth set you have to compete. I think that we need to step it up and compete from the beginning and that should be motivation enough to put our nerves aside and do what we need to do.

Falling behind early, Iowa State switched to a 6-2 offense that allowed ISU to match-up at the net with the Longhorns. ISU was led by 15 kills from Jess Schaben, while Alexis Conaway had 12 with a .455 hitting percentage. Hali HillegasClick here to hear it led ISU”s back row with 18 digs.

Dominant Offense Gives Texas First Set
The visiting Cyclones were stronger out of the gate, with strong serving and passing allowing ISU to build an early 5-2 edge. The lead was short lived, as Texas went on a 7-0 run powered by four kills from Paulina Prieto Cerame to move ahead 12-7. Iowa State was able to settle down after ending the run, moving to a 6-2 offense and taking care of business on its own side of the net to cut the Horns’ advantage to two at 23-21. However, the Cyclones were unable to find the answer to slowing the Texas offense, which hit .571 in the first. Texas wrapped up the first the first asking via a Chloe Collins ace to make it 25-21.

ISU Can’t Hang On To Lead as UT Moves Ahead 2-0
The start of the second started just as the first had ended, with both teams struggling to stop each other’s offenses. However, Texas’ issues were compounded behind the service line, as a quartet of service errors allowed ISU some of the lead early on. The Cyclones finally got Jess Schaben going as she rattled off a trio of consecutive kills to move ISU ahead 15-11. Though UT brought it back to 15-15, but ISU ran off three in a row to push the lead to 18-15. However, the ISU offense faltered and allowed UT back ahead 20-19 after consecutive errors by Grace LazardClick here to hear it. ISU fought of a trio of set points to make it 25-25, but Texas eventually got the set when Collins tipped to the deep corner to take the second 27-25.

Capezio’s Serving Takes ISU to Third Set
Iowa State was able to get off to another good start, as the Cyclones enjoyed the early lead again. This time, ISU was its own worst enemy as the Cyclones committed five-straight unforced errors to allow Texas to move ahead 10-6. Iowa State was able to close the deficit down to one point multiple times and finally tied it back up at 18-18 when Grace LazardClick here to hear it put down a UT overpass. ISU had it tied again at 19-19, 20-20, 21-21 and 22-22 before moving back ahead 23-22 on Ciara CapezioClick here to hear it’s second ace of the set. UT fired a shot wide at 24-22 to bring up set point, which Capezio locked up with her third ace of the set at 25-22.

ISU Steps Up Defense to Force Fifth Set
The Cyclones made it four sets in-a-row with good starts, as they were able to take advantage of some Texas errors to get the lead. Service errors hampered both sides again as each team had a few early ones that prevented opening leads. Both teams worked hard for their points, as UT’s efforts at the net, and Iowa State’s in the back court led to more long rallies. The scrappy play continued throughout, as each error became magnified as the set went along. After a few ties, Iowa State was able to scrap ahead as Conaway and Kuhrt teamed up to deny Micaya White to make it 20-19. The lead became 23-20 on a Suzanne Horner ace, 24-21 on a Samara WestClick here to hear it kill and the fifth set was forced when Cerame fired a shot wide at 25-21.

Attack Errors Cost ISU in Fifth
ISU was in control early, with a Lazard ace helping key the effort. However, Texas was clean in its serving game, and the Cyclones made a trio of attack errors to get UT ahead 7-5. The home side was able to find back some of that dominant offense that guided them in the first set, with Cerame once again the architect as her back-to-back kills gave UT a three-point lead at 9-6. UT’s block stepped up again to deny Capezio and give the Horns a four-point cushion at 12-8. White and Morgan Johnson denied West to bring up match point at 14-10, and UT closed it on first try with Claire Hahn’s ace at 15-10.

Up Next
Iowa State has a mid-week non-conference match at South Dakota on Tuesday. First serve between the Cyclones and Coyotes will be at 7 p.m. in Vermillion, South Dakota.