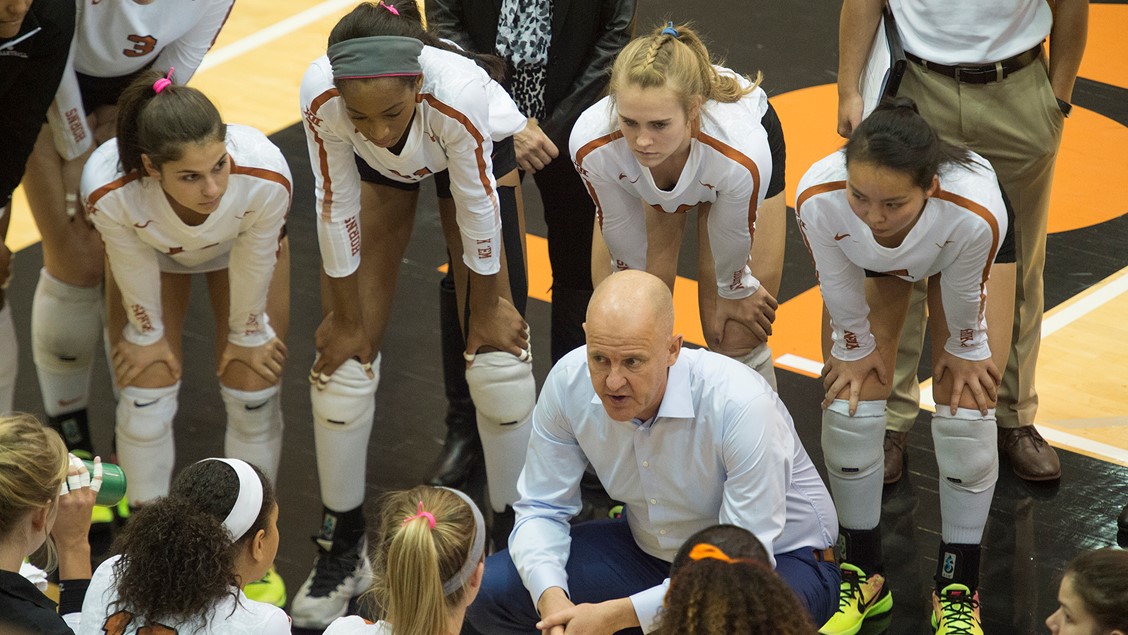 Three Texas players stood out in the team's sweep over TCU as they recorded double-digit kills to hit for .388 in the match as compared to TCU's .204.  Current Photo via Texas Athletics

Three Texas players stood out in the team’s sweep over TCU as they recorded double-digit kills to hit for .388 in the match as compared to TCU’s .204.

The difference in the match was the hitting, Texas out-hit TCU 55-36, out-set them 51-35, out-dug them 58-49 and out-blocked them 9-4. The second set was the only time that TCU showed any attacking promise in the match, as they hit for .324 in that set alone, while Texas posted hitting percentages over .300 in each of the three sets with a .472 third set performance.

Micaya White led the Longhorns with 14 kills and 13 digs for a double-double while Ebony Nwanebu posted 12 kills along with Lexi Sun‘s 12. Setter Ashley Shook dished out 43 assists, seven digs and five kills while Cat McCoy picked up 18 digs in the win.

For TCU, Ashleigh Martin recorded a team-best 10 kills while Lexi MacLean picked up 10 digs along with Dani Dennison‘s 12.

White’s 14 kills came on 35 swings for a .314 hitting percentage. She was one of three Longhorns to finish with double-digit kills.

Senior Cat McCoy recorded a team-leading 18 digs, while White’s 13 digs gave her a sixth double-double of the season.

The score in the first set was tied at four apiece after White had hit back-to-back kills for Texas to open the match 3-0. The Longhorns responded with a quick 4-0 run through kills from Shook and Ogbogu, forcing TCU’s first timeout at 8-4. Growing the lead to as many as eight before set point at 24-17, a block from Ogbogu and Nwanebu secured the first set for Texas.

White and Nwanebu had led Texas with five kills apiece in the first set, and White recorded her sixth on the opening point of the second with a tip for a 1-0 Texas lead. TCU tied on six occasions, but finally at 23-23. A kill from Johnson took Texas to set point at 24-23, preceding the Horned Frogs mishandling an attack from Sun, giving the Longhorns the set at 25-23.

TCU tested Texas’ defense after the Longhorns had moved to a 2-0 match score lead. Forcing Texas to come from behind five times, the Horned Frogs fell behind for the first time in the set at 7-6 when Sun and Johnson combined for a block. The block kick-started a decisive run for Texas to secure the match, 18-8, for a third set score of 25-14.

Next up, Texas heads out on the road to face No. 24 Iowa State on Saturday, Nov. 11 at 5 p.m. CT. The match will be broadcasted on Cyclones.TV.

On the consistency in this game: It was much more consistent for us tonight. The areas we were focusing on this week were serving and passing. And as the match got better, I thought our serving got better. I thought our serving was pretty steady. Offensively, our numbers were really good. The area I was impressed with was Ashley set a really good game tonight. I was very pleased and our set average percentages were very strong. Good results.

On how the serving effort went tonight: It depends on the individual. Some are serving a little bit better. I mean you saw Cat (McCoy) start serving some tough balls down the line. And getting them out of their system a little more. They were hurting us on the right side a lot. So we made a focused effort to get more zone rotation. To eliminate that a little more and got them down to earth. They were both hitting high .400’s. I thought their servers did a nice job, but overall there are some players that are serving very well in practice and aren’t carrying that over into the match. And so, that have to be able to get that confidence and be able to do that. It’s a big part it because TCU in the first game was hitting 5-45 on perfect passes they were negative the rest of the way. So we have to get teams out of system with our size block and put some stress on them. You really give them an out when you’re not putting consistent tough serves on them over a period of time.

On her aggressive play opening the match: It just worked out. I try not to predetermine what I’m going to do. They were hitting the passes perfect for me to get into that situation so I would just dump.

On the overall offensive performance: I think we have weapons everywhere. It has been awesome to be able to get our connections better as the season has gone on with more practice. We keep having more practice together and I think that’s showing. Everyone’s trusting me and I’m trusting them and I think we’ve been building on that really well.

On the sharp effort tonight: You kind of saw it drop off in the second set when it was really close. However, the third set of this game and of the last game, I think we just came out and got out on top of it and didn’t let up like we had in past games. I think that shows improvement within our team.

On how this sets up the team before the next two matches: I think it gives us confidence. You never know what type of environment you’re going to get. You can’t just say that since we won tonight then we’re going to cruise next game. But it for sure gives us some confidence to keep going, especially with the tournament so close. It shows us what we can do if we keep pushing.

Ashleigh Martin led TCU with 10 kills in the match to go along with three digs and two solo blocks. Anna Walsh chipped in nine kills and a service ace while Abigail Buckingham was good for eight kills and three digs. Dani Dennison paced the back row with 12 digs and Lexi MacLean also picked up 10 digs.

Up Next
TCU will continue action on the road as the Frogs travel to Manhattan, Kan., to take on Kansas State on Saturday, Nov. 11 at 7 p.m., inside Ahearn Fieldhouse.