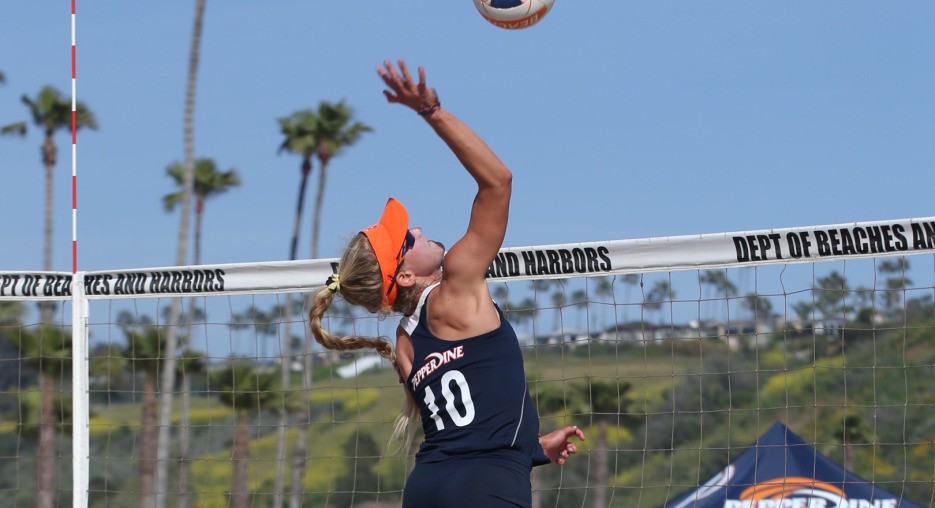 HONOLULU, Hawai’i – The 2nd-ranked Pepperdine beach volleyball team split the last day of the Hawai’i Invitational at the Ching Complex on Saturday night, defeating Cal Poly 5-0 before falling to the 6th-ranked Rainbow Wahine 4-1.

The Waves dominated the first match of action for the second-straight day, downing Cal Poly 5-0 with four by two-set decisions and one three-set bout.

Senior Sarah Seiber (Rancho Santa Fe, Calif./Cathedral Catholic HS/Arizona) and sophomore Kaity Bailey (Ojai, Calif./Villanova Preparatory School) led off the match with the Mustangs with a 21-12, 21-8 win over Dora Bellin and Heather Pembroke to put the Waves up 1-0.

Then, Waves’ No. 1-pair, senior Delaney Knudsen (Valencia, Calif./Valencia HS) and sophomore Madalyn Roh (Scottsdale, Ariz./Chaparral HS) had a battle with Hannah Hubbard and Emily Sonny, splitting the first two sets 18-21 and 21-16 in similar fashion to the match on Friday.  The duo then picked up speed in set three to amass a 15-10 win over the Mustangs to open the day with the sweep.

The Waves had a harder time against UH, dropping the team’s first match since opening weekend in early March.  Hawai’i opened the day with a victory on court five in the first wave, followed by two wins in the second flight over the No. 4 and No. 3 pairs to clinch the dual early.

In the final match on court one that began four hours after the start of the dual, Roh and Knudsen dropped the first set 21-19, but countered in the second set with a 21-18 victory.  In the deciding third set, Roh and Knudsen had all the momentum and fueled by the rowdy Waves on the sidelines bested Mikayla Tucker and Morgan Martin with a 15-10 final set to avoid the sweep.

Next week, the Waves close out regular season in Tallahassee, Fla. with two matches against No. 4 Florida State and other match-ups against No. 9 Stetson and No. 13 Florida International on April 14 and 15.  Follow @WavesBeachVB for updates and check on PepperdineWaves.com for full results, recaps and more!