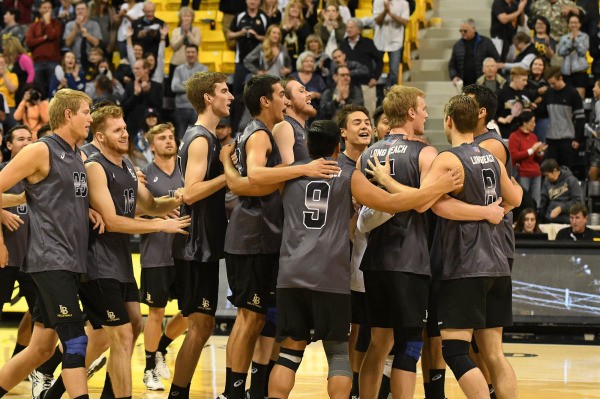 The No. 1 Long Beach State men’s volleyball team won its first Mountain Pacific Sports Federation regular season title since 2001, securing the conference’s top spot with a sweep of No. 14 Cal State Northridge on Saturday. The 49ers won the match 25-18, 25-15, 25-17 with a dominating performance at the net, featuring a .386 hitting percentage and 9.5 blocks.

Senior outside Jakub Ciesla managed six kills to lead the Matadors in the final match of his career. Sophomore outside Dimitar Kalchev added five kills and a team-leading seven digs, while sophomore middle Eric Chance chipped in four putaways.

Long Beach State built a four-point lead at 13-9 in the opening stanza and staved off a mid-set rally for the win. DeFalco had four kills in the opening rally. A pair of 49er miscues and a kill by Kalchev helped Northridge to within one at 15-14. The teams traded points, before LBSU ended the set on a 6-1 run, including three more DeFalco putaways.

Two kills and two blocks by Ensing made it 8-2 49ers to start Set 2. The Matadors would get no closer than four the rest of the stanza. Long Beach State scored seven of the final 10 points with help from kills by four different players.

After a back and forth exchange early in Set 3, Long Beach State used a 5-1 run, including two blocks and an ace by Lugo Rodriguez  to pull ahead 14-7. CSUN cut the margin to four at 16-12 with three kills, a block and an ace, but could not break through. Ensing and Whitt downed two kills apiece and the Matadors chipped in a trio of errors to wrap up the night.

LONG BEACH, Calif. — The top-ranked Long Beach State men’s volleyball team took care of business on Saturday night inside the Walter Pyramid as the Beach swept No. 14 CSUN, 3-0 [25-18, 25-15, 25-17] to win the MPSF regular season title and clinch the No. 1 seed and home court in the MPSF Tournament on senior night.

The Beach finished the regular season with an overall record of 24-3 and conference mark of 16-2, while the Matadors’ season comes to an end as they drop to 12-15 on the year and 5-13 in league action.

The regular season MPSF title is the first for the Beach since 2001 when they tied for first in league action with a 12-5 conference record during head coach Alan Knipe’s first season at the helm.

“I thought the guys did a good job tonight,” Knipe said. “They served tough and created a lot of out of system blocking defense opportunities and we got a lot of converts out of that. I thought we worked hard in transition and we were able to establish some things offensively that we’d been working on, but more importantly, we were able to keep the momentum in our favor by executing and keeping the pressure on and not letting up. So I was proud of that.”

LBSU was led offensively by the sophomore duo of TJ DeFalco and Kyle Ensing. DeFalco led all scorers with 14 kills and hit an impressive .650 (14-1-20) in the match. DeFalco was solid on all sides of the ball as he also led the team with seven digs, while adding four assists, two aces and one block. Ensing finished the contest with 13 kills, while adding four blocks and as many digs.

Tuaniga let the tone once again for the Beach as he dished out 30 assists leading to a .386 attack percentage for Long Beach State.

At the net, Amir Lugo-Rodriguez shined with a season-best seven blocks. Lugo-Rodriguez made the most of his senior night as he also added four kills, one dig, one ace, and hit .375 (4-1-8).

In addition to Lugo-Rodriguez, five other seniors saw action in the match with Bryce Yould, Andrew Whitt and Andrew Sato earning starts, and Eric Ensing and Curtis Stallings coming off the bench.

“The seniors are great,” Knipe said. “It’s such a wonderful group. The team culture is so amazingly good with this program and they care so much about one another. They’re so unselfish. It’s a pleasure to coach these guys. But the great thing is; you know you still have matches ahead of you.”

The Beach were led by DeFalco in the first set as the product out of Huntington Beach, Calif., was untouchable knocking down seven kills on as many attempts without committing an attack error for a perfect 1.000 hitting percentage. DeFalco contributed to half of Long Beach State’s kills in the first set as the Beach earned a 25-18 win over CSUN.

The second set saw the Beach lead throughout as the Matadors trailed the entire frame. Long Beach State hit .481 in the game, while the Beach defense limited CSUN to a .111 attack percentage. The 49ers opened the game with three straight points, then when on a 4-0 run to jump out to an 8-2 lead. Long Beach State went on to cruise to a 25-15 set win and take a 2-0 set lead into the third set.

LBSU continued its dominance in the third set as the Beach took a 5-3 lead on a kill by Kyle Ensing and never looked back. From there, Long Beach State owned the lead and hit .314 in the frame, while the Matadors struggled offensively with a .040 clip. The Beach never allowed the Matadors to score more than 18 points in a single set as they claimed the third and final set by a score of 25-17.

The 2017 men’s volleyball team has now collected a total of 19 three-set sweeps this season which ties them with the 1991 National Championship squad for the most 3-0 victories by a Long Beach State team in program history.

Long Beach State is 13-0 when playing inside the Walter Pyramid this season as the Beach heads into the MPSF Tournament with home court advantage.

“It’s great,” Knipe said of securing home court. “We love playing (at home), like every team does, but most importantly we’re more concerned with the brand of volleyball we’re playing. We have to make sure that we’re always working to get better. When it’s all said and done, we’re very happy with playing at home.”

The Beach will host No. 8 seed USC on Saturday, April 15 at 7 p.m. at the Pyramid in the MPSF Quarterfinals.

NORTHRIDGE, CA – The 2017 season came to an end for CSUN men’s volleyball Saturday as the 14th-ranked Matadors dropped a straight-set decision to top-ranked Long Beach State at the Walter Pyramid.

CSUN concludes the season with an overall record of 12-15 and finished the conference season at 5-13 which was good for a ninth place tie with UC Santa Barbara. The match also marked the end of the Matadors’ 33-year run as a member of the Western Intercollegiate Volleyball Association (WIVA) which would later become the Mountain Pacific Sports Federation (MPSF). CSUN will be one of six members of the Big West Conference beginning next season.

In his final collegiate match, senior Jakub Ciesla led the Matadors with six kills (.188) while also chipping in three digs.

Junior Arvis Greene concluded a breakout season with three kills as he finished the season averaging a team-high 3.99 kills per set.

Sam Porter and Schylar Lillethorup combined for 19 of CSUN’s 20 assists but the Matadors struggled offensively against the top-ranked 49ers, hitting .103 (22-15-68) as a team.