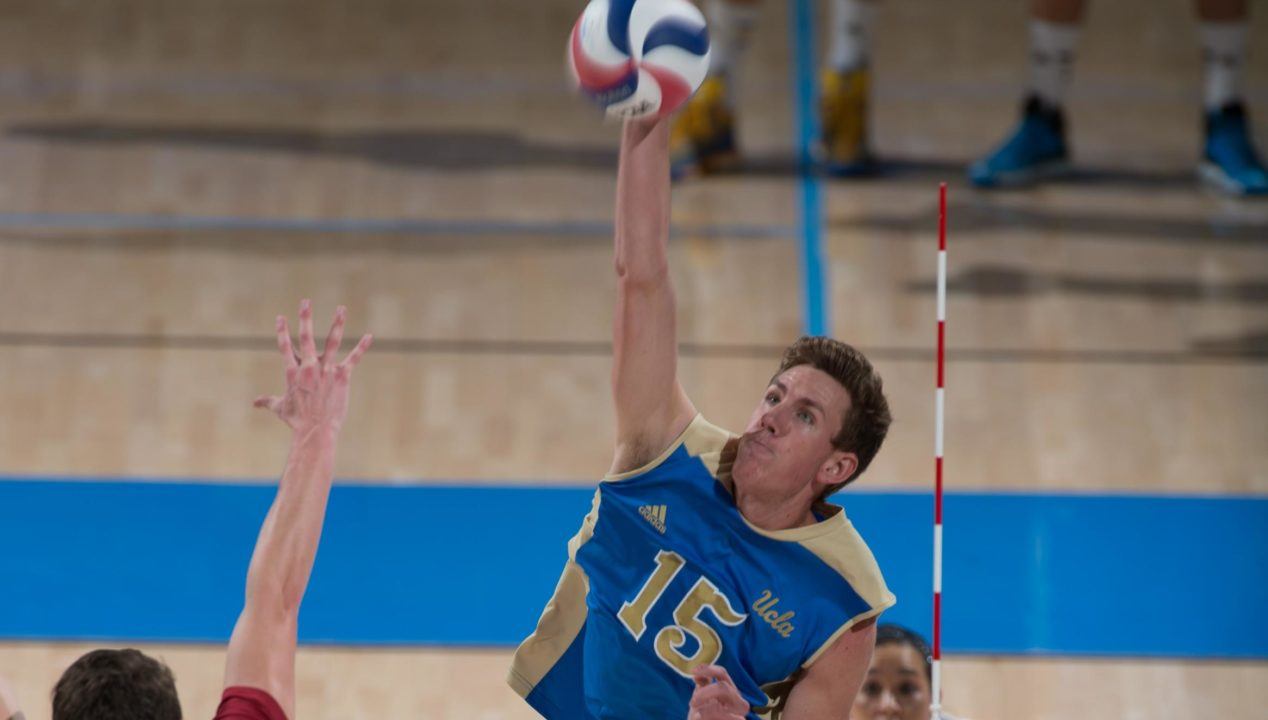 UCLA picked up their sixth straight win with a three set sweep over USC. The Bruins were able to out-serve the Trojans 8-0 and out-hit them .373 to .088.

The Bruins were able to break out to a quick 10-5 lead in the first set behind two Hagen Smith aces. UCLA continues their dominance throughout the first leading 20-12 late in the set. The remainder of the match was back and forth but was not enough for the Trojans to make any sort of comeback, dropping the first 25-18.

Jake Arnitz produced five of this 12 kills in the first set, along with three block assists, while Mitch Stahl contributed five blocks assists in the first.

The beginning of the second set was riddled in errors by both teams, leaving the score tied up at eight all. A kill and ace by Stahl moved the Bruins to 10-8. Hagen Smith continued to serve out of the gym, tying his career-best with three aces in the second set to help the Bruins to an 18-13 lead. UCLA went on to take the second set 25-19 hitting a .500 clip.

With the third tied up at five a piece, Arnitz put down a pair of kills to push the Bruins ahead 7-5. Late into the set, UCLA continued to dominate the Trojans, as the Bruins took a 21-13 advantage. Three kills at the end of the set from the Bruins concluded the match and the set 25-17.

Leading the Bruins was Arnitz with 12 kill with no errors on 19 swings for a .632 hitting percentage. Dylan Missry produced another 10 kills while also adding a match-best four aces. Mitch Stahl had a great defensive match, blocking nine balls while setter Smith dished out 33 assists and nine digs.

The No. 6 UCLA men’s volleyball team registered its sixth straight win on the season by posting a sweep over No. 11 USC in an MPSF match played at the Galen Center on Wednesday night. Scores of the match were 25-18, 25-19, 25-17. Jake Arnitz led the Bruin attack with 12 kills and had no errors on 19 swings for a .632 percentage. UCLA out served the Trojans 8 to 0 for the match and hit .373 for the contest to .088 for the home team.

The serve of Hagen Smith helped to break open a close first set. Smith registered two aces in a four-point run which lifted the Bruins to a 10-5 lead. Dylan Missry came out firing at the line, as well, and his pair of aces extended the UCLA advantage to 17-10. Kills by Arnitz made it 20-12 and then 24-17. The Bruins took the set on a Trojan service error at 25-18. Arnitz finished the set with five kills to go with three block assists. Mitch Stahl added five block assists.

A series of service errors by both teams left the score even at 8-all. A kill and an ace by Stahl pushed the Bruins up 10-8. A couple of Trojan errors handed UCLA a 12-9 edge. Kills by Arnitz and Missry made it 15-11. Smith’s career-high tying third ace of the match put the Bruins in front 18-13. A Missry blast made it 21-14. Christian Hessenauer‘s kill delivered a 23-15 lead. A service error sent the Bruins to set point and Oliver Martin finished it off with a kill for a 25-19 win. UCLA hit .500 for the set and Missry totaled five kills.

Stahl tied his career-high with nine block assists in the match. Smith had 33 set assists and nine digs, in addition to his three aces. Missry finished with 10 kills and four aces. JT Hatch added six digs. UCLA won the blocking battle 10.5 to 6.0.  The Bruins are now 16-7 overall and 9-6 in league play. Next up is an MPSF match at Cal Baptist on Saturday at 7 p.m.

Mitch Stahl had 9 blocks for the Bruins, while Hagen Smith had 9 digs and 3 aces.

In the first set, UCLA ran off 5 straight points to go up 10-5 and USC couldn’t catch up as the Bruins had 5.5 blocks and served 4 aces. UCLA scored back-to-back points to open up a 10-8 edge in the second set and steadily pulled away while hitting .500. The Bruins used another 5-point run to build a 10-6 margin in the third set and kept building on the lead the rest of the way.