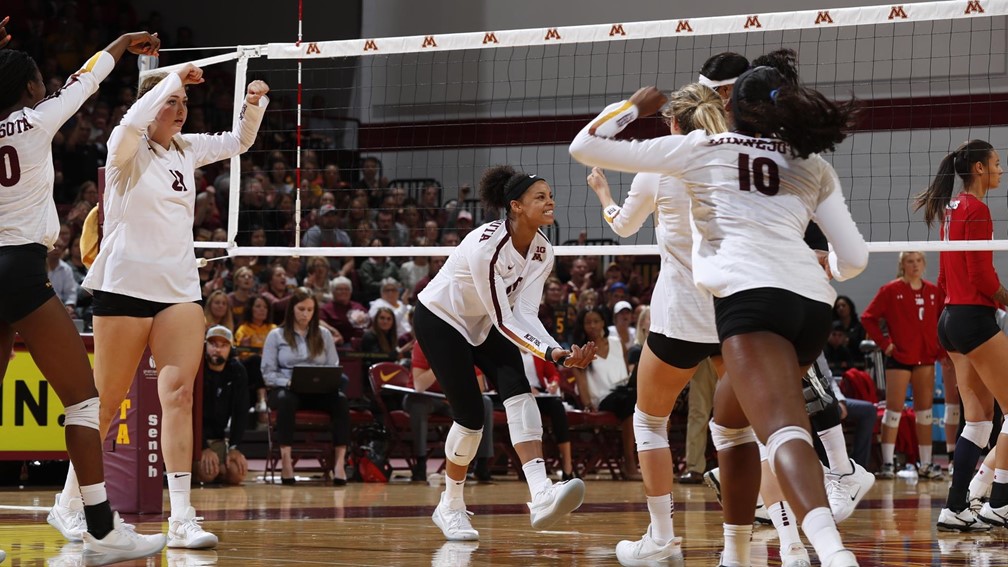 Minnesota increased its stranglehold on the top spot in the Big Ten standings at 7-0 with a home sweep of Illinois on Friday behind 15 kills by junior Alexis Hart. Current Photo via Minnesota volleyball

Minnesota increased its stranglehold on the top spot in the Big Ten standings with a home sweep of Illinois on Friday.

Alexis Hart led a balanced attack for the Gophers with 15 kills, while three other players added eight or more putaways. Stephanie Samedy (10), Regan Pittman (9) and Taylor Morgan (8) followed, while all four hit .250 or better. Pittman hit at a team-best .444 clip, while Morgan put up three blocks. Samantha Seliger-Swenson dished out 41 assists while helping the team to a .270 clip and serving up three aces.

The teams tied nine times in Set 1, last at 13 before the Gophers pulled away with kills by four players and an ace by Seliger Swenson, making it 19-15. The Illini cut the margin to one four times, last at 23-22. Minnesota called timeout and forced to hitting errors by Prince to close out the 25-22 win.

After playing to at 15-all tie in Set 2, the Golden Gophers put together an 8-1 run including five Hart putaways to force Illinois to burn both of its timeouts. Down 23-16, the Illini got a kill from Ashlyn Fleming and a block by Bastianelli and Quade, but it was not enough as Morgan and Adanna Rollins answered for Minnesota to cap the 25-19 victory.

The Gophers outhit the Illini .237 to .o81 in Set 3. Illinois boasted an 11-9 edge midway through thanks in part to four Minnesota service errors. The Gophers turned it around from there, scoring eight of the next nine including two blocks and a kill by Pittman. A pair of Minnesota miscues brought the Illini back within one at 18-17. Two Hart putaways and three more Illinois errors aided a final 7-3 Gopher push.

Work. For. Every. Point. 💪 pic.twitter.com/yxezLZNZZv