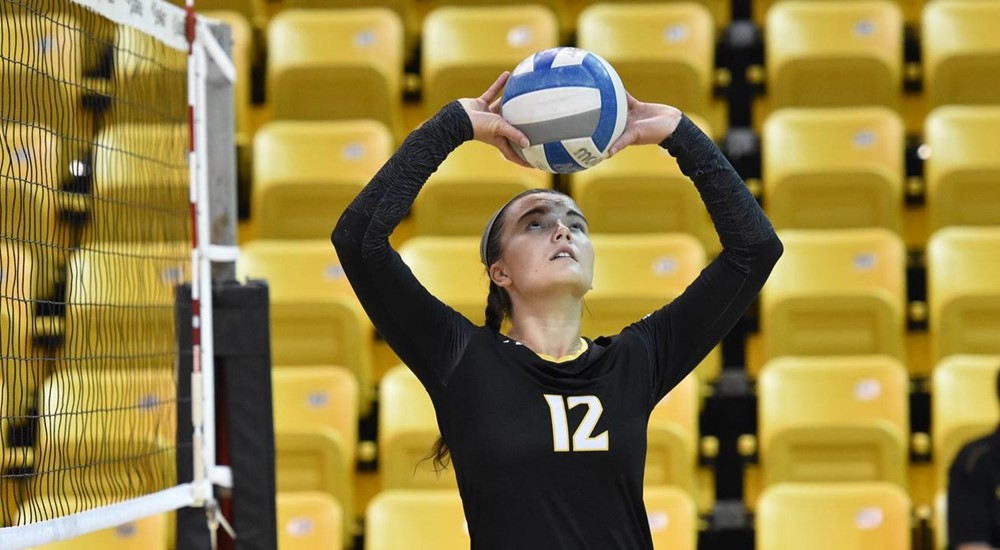 Marrisa Wonder (above) has set the Towson Tigers to a nation-leading 14-0 record so far this season. Archive Photo via Towson Athletics

The ranks of the undefeated teams in NCAA Division I volleyball is now down to just 7 after Wednesdays start to conference play.

The early-season tournaments certainly count, but now is when things get fun. Teams and coaches know each other well, and old rivalries spark passionate play. Of the 7 remaining unbeaten teams, 5 come from Power 5 conferences (the Big Ten claims 3 of those), while the Colonial is home to the only undefeated mid-major programs left.

Those two Colonial teams have a ways to go if they want to survive until a perfect-on-perfect matchup: James Madison and Towson won’t play until October 15th in Harrisonburg.

The first chance at an undefeated-versus-undefeated matchup will come out of the Big Ten, when on October 4th, Wisconsin plays Minnesota at the UW Field House in the Badgers’ annual White Out game. Both have tough schedules to get to that point (and they actually play the same 4 teams: recently-ranked Michigan State, #24 Michigan, #14 Nebraska, and Iowa). If they both make it to October 4th unbeaten, this match will become must-watch TV.

The other two lone wolfs are Miami, out of the ACC, and Florida, out of the SEC, both teams who had their pre-conference schedules cut short by hurricane Irma. Ironically, that cancelled a Miami – James Madison match that had been scheduled on September 15th that would’ve reduced this list by 1.

Both teams have a legitimate chance at running through their conference schedules unbeaten, though doing so is a tall order of consistency regardless of level of opponent.

Based on current rankings, Florida will only face 1 other ranked team in SEC play: Kentucky, who they face on October 15th in Gainesville and November 1st in Lexington.

Miami is less heralded than Florida, and on paper their biggest early test will also come on October 4th against #22 Florida State.

Since last week, 4 previously-undefeated teams have lost – and in fact, 3 of the 4 have lost multiple times. Providence, who was 11-0, has actually lost their last 4 matches against Akron, West Virginia, Army West Point, and Bryant. Indiana dropped a match against Samford and then on Wednesday opened Big Ten play with another against Illinois.

Maryland, who will be without their captain Katie Myers for the rest of the season after a knee injury, fell to Washington and Ohio State back-to-back in their last two games. Indiana and Maryland will play on Saturday.

Iowa State has only lost once, dropping a 3-2 rivalry decision to giant-killers Northern Iowa.