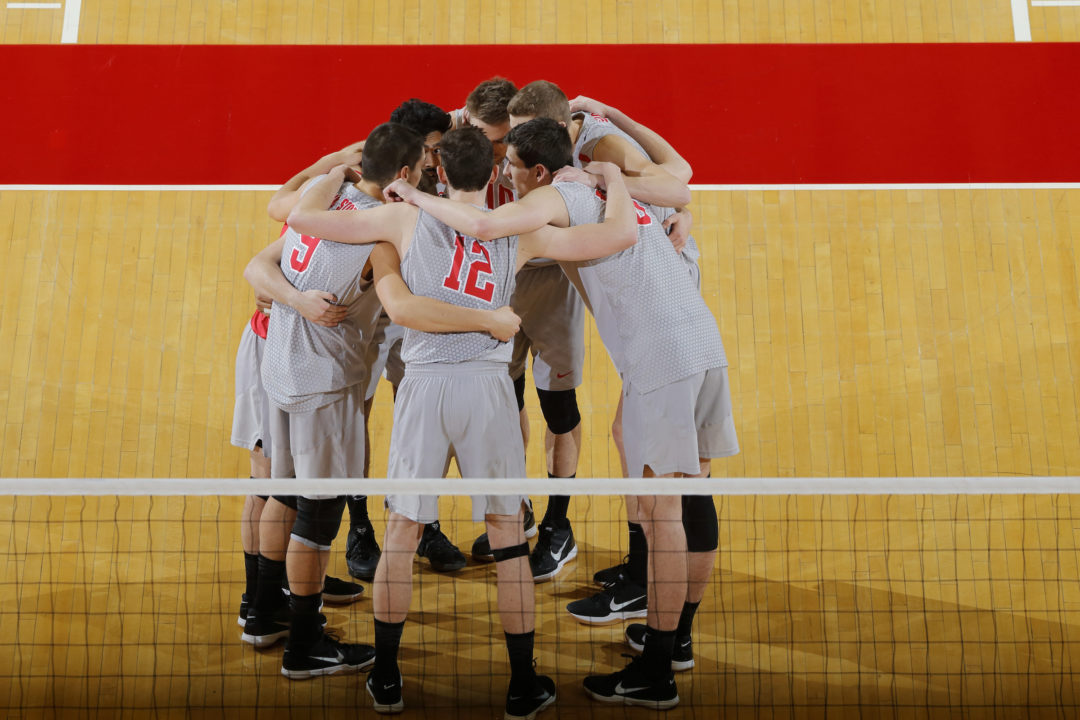 Ohio State closes out a long series of away games with their sixth consecutive win on the road. Archive Photo via Ohio State University

ST. CHARLES, Mo. – The Ohio State University Buckeyes traveled to St. Charles, MO on Sunday to take on the Lindenwood Lions, and the Buckeyes barely managed to pull off the five set win. OSU is now 12-0 when facing the Lions.

Leading the Ohio State offense was senior outside hitter, Nicolas Szerszen, with 17 kills on a .333 clip. Blake Leeson also had an impressive offensive performance with nine kills and one error on a .571 hitting percentage. Setter Sanil Thomas ran the offense with 49 assists and added 12 digs for a double-double.

Lindenwood was led in kills by Charley Hlavin (.171) and Nick Stevenson (.062) with 16 and 11 kills, respectively. The Lion offense was held to a .146 clip. Setter, Adam Brewster, delivered 41 assists and added two kills and seven digs.

The Buckeyes will return to play on Thursday night where they will end their long tenure on the road to host Loyola. Lindenwood will hit the road one last time this season as they play Ball State on March 30.

SAINT CHARLES, Mo. – The No. 9 Ohio State University men’s volleyball team (17-4, 8-2 MIVA) thwarted a Lindenwood match point opportunity at 26-25 in the fourth set, seizing four of the next five rallies to extend the contest into a fifth set as 29-27 victors. The Buckeyes then finished off the home team, 15-11, to remain within a game of MIVA-leading Loyola (9-1) in the conference standings and race for a regular season title.

Nicolas Szerszen was responsible for 28 points; accumulating 17 kills, six aces and eight blocks (2s, 6a). He added 10 digs to come up just two blocks shy of a triple-double. Szerszen terminated at a .333 attacking rate (17-5-36). His fellow pin hitters weren’t quite as efficient, but did combine for 25 more kills. Blake Leeson delivered when called upon offensively with nine kills on 14 attempts and a lone error (.571) while sending back nine Lindenwood attack attempts for blocks. Ohio State rejected the Lions 18 times in total.

SET 1: Jakes Hanes lifted the Scarlet & Gray in Set 1, finding the hardwood on five of six swings in leading Ohio State to a .429 team hitting percentage. Lindenwood nearly kept pace with a .333 offensive efficiency, but ultimately never led after a 1-0 edge handed over by a Buckeye service error to start the afternoon’s competition. Hanes’ fifth kill served as the finalizer, finishing a 25-22 winner.

SET 2-3: Team hitting efficiencies in the .160s paired with 15 total service errors in Sets 2-3 doomed Ohio State. The Buckeyes came close, but couldn’t overcome the deficiencies in back-to-back 26-24 defeats sending the Lions to intermission with a two-sets-to-one lead.

SET 4: Serving woes lingered in the fourth frame (seven errors). Ohio State compensated with seven stuffs though, pushing Lindenwood into the red numbers offensively (minus-.026 attack percentage). The set spilled past 25 points once again when the Lions came out of their timeout to even the score at 24-24. Ohio State would benefit from a timeout of their own moments later, followed by consecutive Szerszen put-aways to go ahead 27-26. Another OSU service gaffe stunted the Buckeye momentum at 27-27. The next two points went to Ohio State, however, sending the contest into a fifth and final set.

SET 5: Service was a positive in the fifth, materializing as three aces. The first by Sanil Thomas to open the set and two more coming by way of Szerszen on back-to-back points late in the frame. Ohio State led from start to finish and escaped 15-11.

The Buckeyes play their final regular season home matches next week, hosting No. 6 Loyola and No. 10 Lewis on Thursday and Saturday evenings, respectively.

OVERVIEW
Lindenwood men’s volleyball drew nationally ranked Ohio State to five sets at Hyland Arena Sunday afternoon. The Lions had a chance at the upset, but ultimately fell to the Buckeyes. The defeat drops Lindenwood to 8-12 overall and 2-8 in MIVA matches.

NOTABLE
– Charley Hlavin led the Lion attack with 16 kills, a career best for the sophomore.
– Outside hitter Nick Stevenson notched 11 kills and tacked on 10 digs for a double-double, his first career double-double.
– Setter Adam Brewster tallied 41 assists and was part of four blocks while recording seven digs.
– Sam Schindler led the Lions with five blocks. He also had nine kills.
– Connor Hipelius had eight kills and four blocks while adding an ace.
– Libero Ryan Vorderer posted a match-high 13 digs.