#9 Kansas Hits .386 as Pin-Players Dominate in Sweep of TCU 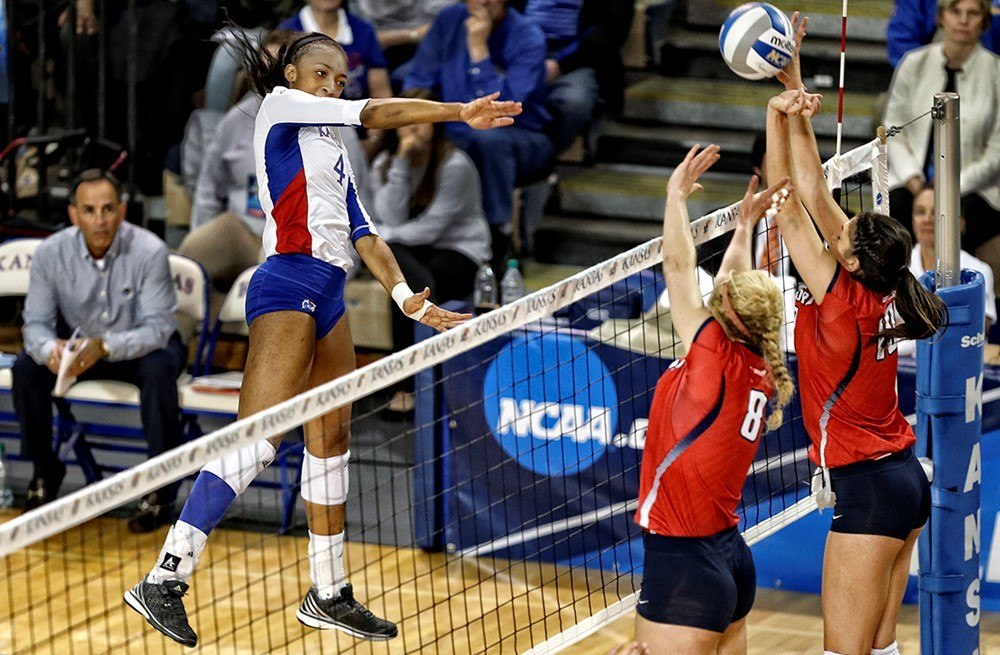 #9 Kansas swept TCU for their 17th straight Big 12 victory behind an armada of dominant pin-players. Archive Photo via Kansas Athletics

Lawrence, Kansas – After needing five sets for their first two conference wins, the defending Big 12 champion Kansas Jayhawks dispatched of the TCU Horned Frogs in straight sets. The win pushed Kansas to 3-0 in conference play and gives them their 17th straight Big 12 victory, while TCU falls to 0-3 in Big 12 play.

Kansas has alternated through the year between starting an extra defensive specialist and outside hitter Jada Burse, who ended up starting in this one. The combination of Burse (nine kills, two blocks), Madison Rigdon (10 kills, five digs, three blocks) and Kelsie Payne (11 kills, three digs, one ace) gave Kansas three dominant pin players in the match as together they totaled 30 kills on 64 swings with just seven errors (.359).

They weren’t the only Jayhawks with strong offensive performances either, as setter Ainise Havili dished out 39 assists in just three sets in addition to her four kills, four digs and two aces. Overall, Kansas hit .386 as a team which complemented a defense that out-blocked TCU six to three and had more digs (35-30) led by Allie Nelson‘s 13 in limiting TCU to a .204 hitting percentage – rather impressive considering the Horned Frogs high-clip in the first set.

That first set was dominated by both team’s offenses with Kansas hitting .500 to TCU’s .324. Anna Walsh, who would total a dozen kills and hit .364 for TCU, came up big along with Allye Beth Deaton (10 kills for the match) in keeping TCU around, as side outs were aplenty with 15 ties in the opening game. One of those ties occurred at 18-18, but a 4-1 Kansas run gave them just enough distance to eek out the set 25-22.

Set two was just as tight through the start, but again KU would go on a run for some distance. Five unanswered points put the Jayhawks up 17-12 in the set, which again they would not surrender in pulling out a 25-17 set win for a 2-0 lead.

Kansas didn’t wait for a run in set three, as the Jayhawks jumped in front 6-1 right out of the gates. Holding that lead t0 17-11, TCU sparked a comeback with five of six points. A Kansas timeout helped them end the run as they would grab a more comfortable lead and win the final set 25-21 for a three-set sweep.

Moving forward, Kansas will have a mid-week tilt at West Virginia on Wednesday as the Mountaineers took Texas to five in Morgantown last week. TCU heads home looking to get off the Big 12 schneid as they will face Kansas State on Wednesday night.

LAWRENCE, Kan. – The TCU volleyball team battled hard but could not overcome a strong No. 11 Kansas offensive presence as the Jayhawks took the 3-0 (25-22, 25-17, 25-21) victory on Saturday afternoon at the Horejsi Family Athletics Center in Lawrence, Kan.

The Horned Frogs (8-6, 0-3 Big 12) went toe-to-toe with the ranked Jayhawks (14-2, 3-0 Big 12) in the opening set as the teams tied on 15 occasions but a small run near the end proved to be the difference as Kansas took the set 25-22. The battle continued into the second set but a kill from Kelsie Payne sparked an 8-1 run as the Jayhawks never looked back as they took the final two sets to get the sweep.

Anna Walsh led the team in kills with 12 in the match, while Allye Beth Deaton put down 10 kills and Abigail Buckingham recorded nine kills. Dani Dennison anchored the back row with 10 digs, while Ashleigh Martin picked up nine digs.

Stat of the Match
9 – Anna Walsh hit .364 for the match which marked the ninth time this season she has hit above .300 and the eighth time out of the last nine matches.

Quotes of the Match
TCU Director of Volleyball Jill Kramer
Opening Statement
“Our team came out really strong in the first set. We sided out really well and Kansas just sided out better. It was a close one. In the second and third set, we would start to make little runs of errors and I have to say our effort was not quite as good there. You can’t do that. We talked about that a little bit and in the third set we dug ourselves a hole and then started to play hard again. Again, you can’t do that. You have to stay after it every single point. I think we are learning. I think we are much improved from last week and I think a lot of the things we are working on in practice we are starting to see in matches and that needs to continue to happen. The girls just have to keep believing so they have to go out there and fight, keep believing and keep working hard. The Big 12 is a tough league and it is probably the toughest it has been awhile this year. We are just looking to get out and battle every single match and that is what we have to be prepared for.”

Up Next
TCU will return home to the friendly confines of The Rickel inside the University Recreation Center for two straight matches as they welcome Kansas State on Wednesday, Oct. 4 for an 8 p.m., showdown on ESPNU before taking on Texas on Sunday, Oct. 8 at 2 p.m., on ESPN2.