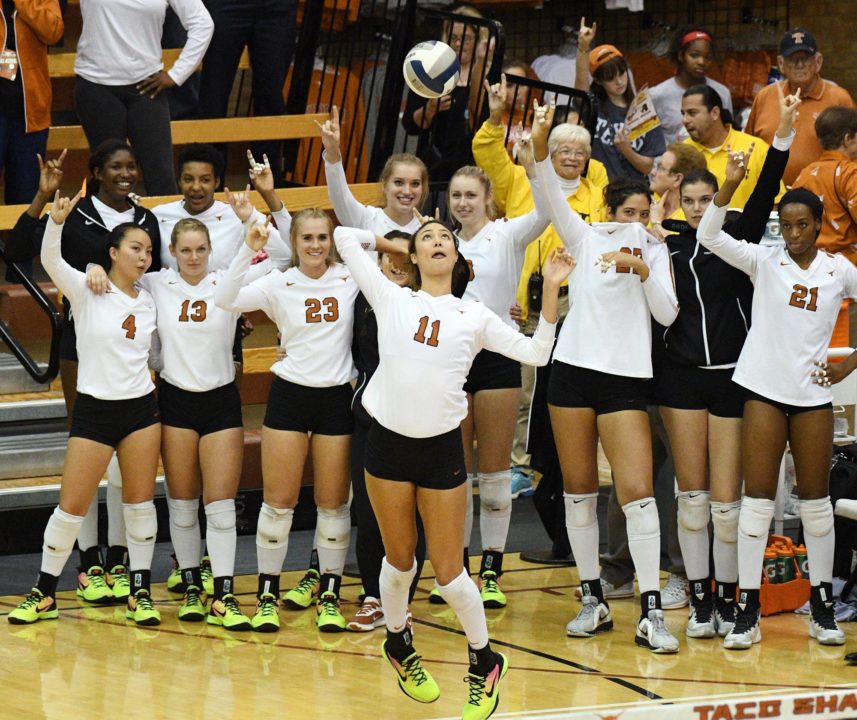 The No. 5 Texas Longhorns dominated the net against Kansas State, hitting at a .494 clip and putting up nine blocks in a Saturday sweep, which gave the team its fifth-straight victory.  Current Photo via Texas Athletics

AUSTIN, Texas – The No. 5 Texas Longhorns dominated the net against Kansas State, hitting at a .494 clip and putting up nine blocks in a Saturday sweep, which gave the team its fifth-straight victory.

Texas hit at a stellar .531 clip in the opening set and followed with two .450 plus efforts en route to the win.

Texas wasted no time setting the tone, jumping ahead 10-3 in Set 1. Four players tallied kills in the early stretch, which also featured two blocks. Johnson turned in a trio of kills to lift the Longhorn margin to nine at 14-5. The Wildcats were within five at 16-11 after four kills and an ace by Zumach. Up 18-13, Texas scored five of the next seven, including two Sun kills, to go ahead 23-15. Kills by Ebony Nwanebu and White clinched the 25-17 win.

The Longhorns started Set 2 with a 7-2 run, including three straight blocks by Ogbogu. Texas broke away with an 8-1 midset rally, which pushed the margin to 11 at 18-7. Three Wildcat miscues, two blocks and kills by Sun, Johnson and White helped the Longhorns to the lead. K-State would get no closer than 10 the rest of the way. Putaways by White, Sun and Johnson sewed up the 25-12 win.

Texas quickly built a nine point lead in Set 3, going ahead 15-6. Five Longhorns combined for 11 kills in the stretch, including three each by Nwanebu and White.The teams traded points over the final 20 serves en route to the 25-16 final score. Four Zumach kills and four Texas miscues aided the Wildcats, while two kills each by White and Ogbogu helped the Longhorn cause.

The Longhorns committed only two hitting errors on 89 attacks in the match, posting 46 kills for a .494 hitting percentage.

Sophomore Micaya White led Texas for her tenth-consecutive match with double-digit kills with 14 (.375), adding 10 digs for her third double-double of the season, also adding three blocks.

Freshman Lexi Sun joined White as the other Longhorn recording double-digit kills with 10. Her 10 kills came on 16 swings and no errors for a career-high .625 hitting percentage.

As a team, Texas finished with nine blocks, holding Kansas State to zero and held the Wildcats to a .147 hitting percentage.

It was one-way traffic opening the match, with the Longhorns outhitting Kansas State .833 to .000 on the way an 8-2 opening lead. Around the Wildcats calling timeout at 8-2 and at 13-5 following back-to-back kills from Johnson, Texas did not allow their lead to fall below five, securing the set at 25-17.

With a celebratory Gregory Gym crowd cheering on a stifling defensive performance from the Longhorns, White led on kills as Texas’ lead in the second frame had grown to eleven by 18-7. Closing out the set at 25-12, Texas had committed one hitting error as four Longhorns hit above .500.

Looking to take a three-set victory, the Longhorns’ defense had ensured that the Wildcats were unable to prevent Texas holding onto the set lead after a run of four-consecutive points made the third set score 15-6. Kills from Bedart-Ghani and White moved Texas to match point at 24-15, before the Longhorns forced a Kansas State error to secure the sweep at 25-16.

Texas will hit the road again to take on TCU in Fort Worth, Texas on Sunday, Oct. 8 at 2 p.m. The match will be televised live on ESPN2.

On overall impressions of the match: There are no complaints from every facet of the game tonight. I thought we were good in every aspect of it. This result was a very good performance and a good 3-0 win.

On why he thinks team has been successful at blocking: One is we’re physical and we can get up over the net and then when we pick good spots. I don’t know about what other gyms do with their training, but we just try to spend a lot of time doing the same thing over again and making sure that we’re getting reps every day. Erik (Sullivan) does our defense and he does a great job of scouting and getting them prepared and getting them in the right positions. We’ve got a really good correlation to what they’re hearing and what they’re seeing and executing that. Tonight was the best night that we’ve had in terms of really being all over the play sets and understanding where their percentages were. As you get further in the season, you get more data to know what percentage of players are getting what balls and how we can kind of overload on that a little bit more and use some of that information to our advantage.

On using experience from the first half of the season: I told the team two weeks ago that it’s a long season. We have to keep growing and keep showing them what the rest of the country is doing. I think since we had that meeting they kind of acted and they’ve been really, really good. We had a good performance against Baylor. I thought we had two really good practices and no let up, and then that correlates to this. So with volleyball, there’s so much trust that is built over doing things the right way over a period of time, so the system can hold and be good. And sometimes it takes us, as a program a little bit longer to get to, but I think now we’re starting to see some correlation to that and seeing if we can get organized. Now we have a bye on Wednesday, but then a brutal week because we play Sunday at TCU, and then at Kansas, and then home with Iowa State. So there’s a lot to be said in that one week, probably we’re going to have to be training six or seven days during that. So we’ve got to do a good job as a staff to make sure they’re rested and just getting enough touches and feeling good about what we’re doing.

On what the crowd was like and being able to play back in Gregory Gymnasium: There’s no place to play like Gregory. After being away for so long and being back in our environment, it feels good to get back into this groove. I think that’s a really big reason why these last two games have gone well for us.

On how the offense played against Kansas State: I think everyone played fearless. We were just going for everything. We weren’t afraid to get blocked, which really helped our offense. I think that’s a big reason a lot of us did very well.

On how it feels to get a win where Texas led the whole way: After going to five with West Virginia, we met with ourselves and decided that when we’re up, we’re going to stay up. It’s going to start from the beginning and it’s going to go all the way till the end. These past two games we’ve applied that.

On the game: I would say that our passing was executed really well today which allowed me to play better on offense. Our blockers also did a great job, which made blocking –especially for me— a lot easier.

On success of team blocking: I think it’s a matter of buying into the system. Our coaches give us reports about each team before each game; buying into those stats and focusing on them during the game makes it much easier to do what we need to do.

On the 3-0 record to start Big 12 play: It feels good; the past two games have felt the best throughout the season. I think our record shows that our hard work is paying off and things are starting to come together.