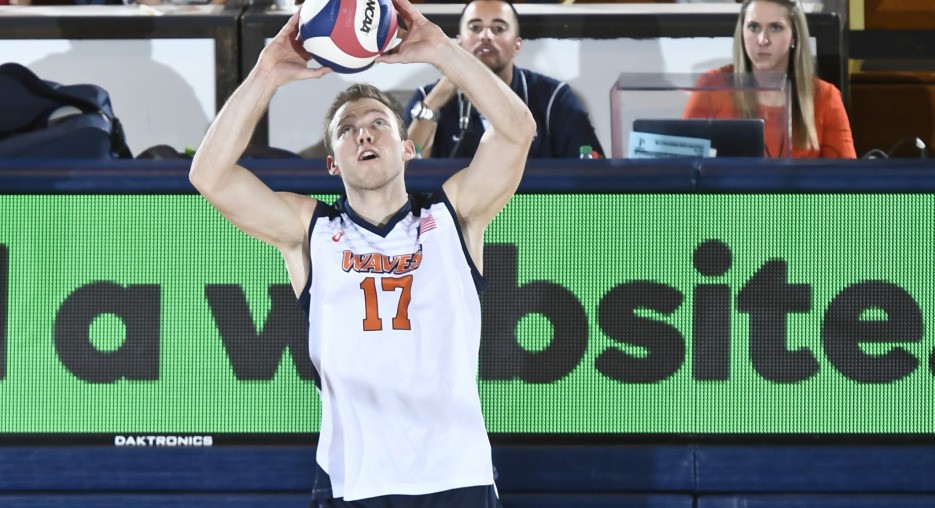 #9 Pepperdine fought through fives sets to take down #14 CSUN in a fairly even match up.

Pepperdine hit for .303 while CSUN was close behind with a .274 hitting percentage. The Wave outblocked the Matadors 13-12 and had seven to three aces.

CSUN picked up the first set, but Pepperdine dominated in the second to tie up the match at 1-1. This exchange happened once more, sending the match into a five and deciding set. Early in the fifth, the score was even at 4-4, but the Wave were able to pull ahead to 7-5. The lead didn’t last long, with CSUN fighting back to tie up the match at 12-12. The conclusion of the match came off of two David Wieczorek kills and a forced attack error.

For CSUN, Arvis Green slammed down 21 kills while Dimitar Kalchev added another 20. Green also picked up eight digs and four blocks, while Kalchev dug seven balls and had five blocks.

With the score tied 2-2 overall, the match was any teams to take and each team worked hard.  After a 4-4 early tie, the Waves pulled ahead 7-5 with a Harriman smash.  The Waves maintained the small lead for a few points, but CSUN stayed in the set and came back to tie the match 12-12.  Pepperdine unleashed at that point, posting back-to-back kills from Wieczorek and a forced attack error to finish the night with a Waves’ win 15-12.

Senior Mitchell Penning (St. Louis, Mo./Westminster Christian HS) led the team with a tied season-high ace output after marking three on the opposition.  He also picked up four kills and four blocks for the Waves.  Freshman Noah Dyer (San Clemente, Calif./Saddleback Valley Christian HS) had a big night on the outside, picking up 13 kills on a .360 success rate, while tallying seven digs.

In the first set, the two teams worked point-for-point through 5-5, 10-10 and 15-15 tied scores.  The opposition then broke slightly ahead at a 21-17 advantage, before the Waves would close the gap to a small one-point deficit at the 20-21 mark.  The Matadors then took the sideout momentum to a 25-22 first set win to get the first lead of the night.

The second set belonged to Pepperdine from the beginning, as a strong Penning service put the opposition off-kilter en route to a 7-3 Waves’ start.  It was a deficit CSUN was unable to overcome as the Waves kept pounding down to a nine-point lead at 19-12 with the help of a Wexter, Carr rejection and a Wieczorek smash.  With the clear advantage, the Waves were comfortable late in the set and a final kill from Penning earned the 25-16 Waves’ set win to tie the overall match.

The third set began as evenly as the first, with teams amassing 6-6 and 13-13 ties, before the Matadors started working ahead.  With the slight two-point advantage, CSUN continued to collect kills to eventually amass a 25-21 third set win for the 2-1 lead overall.

The match continued with the intensity, working with a 7-7 tie early on before the Matadors put up a two-point advantage at the 12-10 mark.  Pepperdine tied the set at 16’s and each side exchanged tied scores and leads through to a 20-20 score.  The Waves kept the momentum up on the back-stretch, however, and an ace from Penning and a set-winning smash from Harriman earned a 25-21 set win for the Waves to extend the match to a fifth.

Next, Pepperdine travels to Palo Alto, Calif. on Saturday, March 18 to challenge No. 8 Stanford.  Follow Pepperdine @PeppVolleyball on Twitter and Facebook for immediate updates and head to PepperdineWaves.com for recaps, results and more.

In a match both teams desperately needed, the ninth-ranked Pepperdine Waves held off 14th-ranked CSUN in a key MPSF match Wednesday at The Matadome.

“I’ll say this about our team, we played hard and we never gave up,” said CSUN head coach Jeff Campbell. “When some of these matches have gone to a fifth set, I think our guys are trying so hard that were changing the way we play but we are getting better. Now we’ve got to bounce back against a good Long Beach State team on Friday.”

Junior Arvis Greene led the Matadors with 21 kills (.310) while also setting a career-high with eight digs. Sophomore Dimitar Kalchev added 20 kills (.286) to go with seven digs, five blocks and two aces which tied him with Eric Vance for the single season CSUN record with 57.

The visiting Waves held a slight advantage in hitting, .303-.274 but had seven aces to the Matadors’ three. Both teams blocked well with Pepperdine posting 13.0 team blocks to CSUN’s 12.0.

The Matadors hit a combined .464 in the two sets they won but just .118 in the three sets they dropped.

After taking a two sets to one lead following a 25-21 win in set three, CSUN looked to be in control of set four leading 16-13 after a Byers kill. But Pepperdine rallied for four straight points and led until Greene connected giving the Matadors a 20-19 lead. But the visitors dominated the final stages of the set, outscoring CSUN 6-1 down the stretch to force a fifth set.

In the fifth, Pepperdine claimed three of the first four points and never trailed. The Matadors pulled even at 3-3 and again at 4-4 but could never take the lead. After a Noah Dyer kill gave the Waves a 10-7 lead, kills from Lillethorup and Greene cut the lead to one. Trailing 12-9, CSUN made one final push, rallying for three straight points, the last coming on a Kalchev kill before Pepperdine closed the match on a 3-0 run.

David Wieczorek led all hitters in the match with 23 kills on .487 hitting to pace the Waves.

CSUN wraps up the home portion of the 2017 schedule Friday night as the Matadors will honor seniors Jakub Ciesla and CJ Suarez prior to the match against top-ranked Long Beach State.