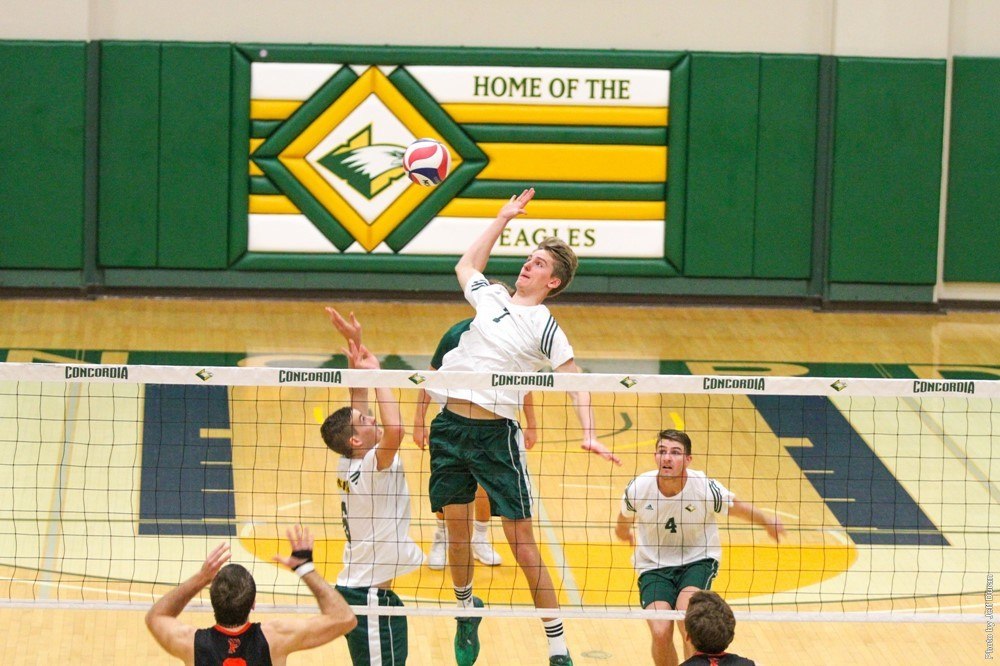 Hunter Howell played a huge roll in the eighth consecutive Eagle win. The middle blocker hit .583 with eight kills on 12 swings with only one error. His contribution wasn’t limited to offense – Howell posted eight blocks and two digs. Aside from helping Concordia upset the No. 15 Gauchos, Howell was named Off The Block Men’s Volleyball National Defensive Player of the Night.

In set one, the Eagles took a quick 5-2 lead on a few UCSB errors, an ace from Joey Pillon and a Jonathan Predney kill. Concordia kept its momentum throughout the set and established a seven point lead on a kill from Taylor Falduti. Although the Gauchos made a push and got within three of the Eagles, a UCSB hitting error and kill from Predney gave the Eagles a 22-17 advantage. Pillon put the ball away on set point to claim the game 25-22.

The Eagles established a comfortable lead in the second set, but secured the game on a four point run from kills from Ryan Anselmo and Howell. Isaiah Pono Kaaa came in clutch at the service line and delivered the set point ace.

Santa Barbara’s offense and serving picked up in set three, while the Eagles gave away more points on attacking and service errors. The Gauchos sent the match to set four with the 25-15 win.

Howell put away the first two Eagle points in set four and Anselmo’s ace put the Eagles behind 3-4. After going down 12-8, an effective Eagle timeout was called. The team responded with three straight points on a kill from Predney and two Gaucho mistakes to put Concordia within one. The two teams traded points until UCSB raced on a three-point run for game point. The Eagles performed under pressure with a kill from Pillon and were given a free point from a Gaucho error to tie the game at 24 and again at 27. Predney, Howell and Hammer’s big time block gave the Eagles match point. And once again, a Hammer-Howell combo block closed the game out for Concordia.

The Eagles are now 17-7 heading into their rematch against UC San Diego. In their last face off, the Tritons won a close five set battle over the Eagles. The game is at 7 p.m. on Friday in La Jolla, Calif.

Forty-eight hours after overcoming a 2-0 deficit to beat Harvard, UCSB (10-12) looked like it had another comeback up its sleeve on Wednesday, dominating the third set and reaching game point in the fourth, but CUI (17-7) regrouped to pull out the win.

Freshman outside hitter Roy McFarland led the team with 14 kills on the night, while freshman middle Keenan Sanders added a dozen kills on .455 hitting with a team-best four blocks. Senior libero Parker Boehle was impressive in his two sets of action, steadying the defense with 12 digs.

The Eagles meanwhile were buoyed by Jonathon Predney’s match-high 15 kills and an eight-kill, eight-block performance from middle Hunter Howell.

Like Monday’s win, UCSB head coach Rick McLaughlin made a number of lineup changes after going down 2-0, moving Grady Yould from libero to outside and bringing in outside hitter Owen Karlenzig, middle blocker Brandon Hopper, and libero Parker Boehle.

Those moves seemed to pay big dividends, as the Gauchos responded with a dominant third set to cut their deficit to one.

UCSB hit a match-high .429 in the frame, and built its lead on a pair of long service runs from Karlenzig and Yould, bringing the score from 7-7 to 14-8. Yould finished off the job his next time through the rotation, closing the set on a 4-0 run. Sanders had his best offensive set in the third, notching a team-high five kills, including a quick hit to the back left corner to seal the win.

Six kills from McFarland and eight digs from Boehle highlighted the Gauchos’ fourth set performance, but a questionable call down the stretch and clutch plays from CUI prevented a potential UCSB comeback.

Leading 26-25, the Gauchos thought they had the set won when they were able to stuff a Predney right-side swing, but the block was deemed to be just out of bounds, knotting the score up at 26-all.

CUI responded with a 3-1 run to clinch the match, including consecutive blocks on McFarland swings to end it.

Elsewhere in the MPSF, Pepperdine defeated CSUN in five sets on Wednesday night, creating a three-way tie (UCSB, CSUN, USC) for the eighth and final playoff spot in the conference. Seventh-place Pepperdine sits just a half-game in front of the eighth-place teams.

After taking next week off for final exams, UCSB begins its stretch run with a pair of pivotal league road matches, first at Cal Baptist on Thursday, Mar. 30 then at USC on Friday, Mar. 31.