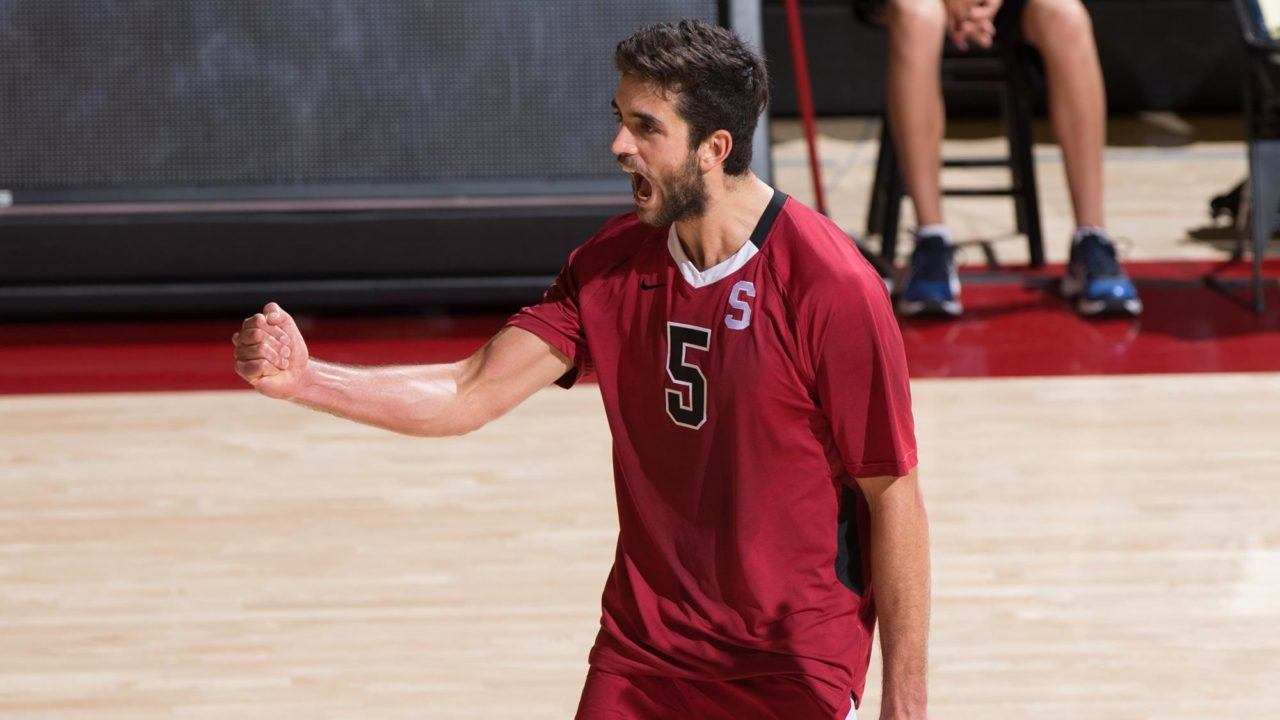 Gabriel Vega led Stanford to their 3rd win of 2017. The team's schedule gets tougher from hear-out, with back-to-back games against #1 Ohio State upcoming. Current Photo via Stanford Athletics

The 9th-ranked Stanford Cardinal, behind a continued strong run of play from freshman setter Paul Bischoff, swept the McKendree Bearcats 3-0 on Saturday night. The Cardinal are now 3-0, having dropped just a single set so far this season.

After sitting out the team’s last game against Quincy, Bischoff had a career-best 37 assists in the team’s win on Saturday. That included 15 to Gabriel Vega, who had as many kills on 25 swings and just 4 errors for a .440 hitting percentage. Jordan Ewert joined him in double-digit kills, and hit .500 – part of an overall .427 hitting percentage for the Cardinal.

McKendree struggled to dig many balls from the free-swinging Cardinal (they had only 12 digs on the game), but did hit well offensively with a .328 percentage. Their top hitter, Maalik Walker, struggled with 8 kills by 5 errors, though his opposite Nolan Rueter performed better with 7 kills and a .385 percentage.

After an easy early schedule, Stanford will step up their competition next weekend with a Friday/Saturday double-header against the #1 team in the country Ohio State. Friday’s game will be played in the 7,400 seat, Maples Pavilion, typically home to the Stanford women’s volleyball team; while Saturday the two teams will play at the 1,400 seat Burnham Pavilion & Ford Center. The Burnham Pavilion, also known as the “Old Pavilion,” opened in 1922 and will provide a more intimate environment.

McKendree will swing through Utah to play two games against #3 BYU and another against Concordia next week before returning for a home stand in Illinois.

Vega (15) and Ewert (11) combined for 26 of the team’s 44 kills. Freshman setter Paul Bischoff controlled the offense with 37 assists as the Cardinal (3-0) hit a season-high .427. The Wheaton, Illinois native also stuffed the Bearcats (0-4) to seal the second set for Stanford.

Redshirt junior middle blocker Kevin Rakestraw registered seven kills on .500 hitting. He also came up with two big digs on the same rally late in the third, sparking some added energy from the bench.

Up next, Stanford will host defending national champion Ohio State for its home openers, Jan. 13-14. Friday’s match will be played in Maples Pavilion and televised on Pac-12 Network.

The McKendree University men’s volleyball team dropped a 3-0 decision to No. 9 Stanford University Saturday afternoon in Santa Barbara, CA. The Bearcats fell by scores of 25-17, 25-21, and 25-21.

The loss dips McKendree to 0-4 on the season. The Bearcats return to action Jan. 12 against No. 3 Brigham Young University in Provo, UT.

Rueter scored back to back with a kill and an ace followed by kills from Patterson and Fiduccia to give McKendree 5-3 to start the match. Stanford responded with six of the next eight point to claim a 9-7 lead and later strung together a 4-0 run that featured three straight aces to go in front 20-15 before closing out the first set with a four point run that was capped by three more aces.

Five different Bearcats put down kills as McKendree started off the second set with a 9-7 advantage. The Cardinal flipped the script with a 7-0 run to jump ahead 14-9, but McKendree rallied with a 5-2 run to pull within two at 16-14. The margin moved to three at 22-19 before back to back blocks from the Bearcats cut the lead to one and forced a Stanford timeout. The Cardinal responded after the break with the final three point to close out the second set by four.

Stanford used a 6-1 run to take an early 11-7 lead in the third set before a 5-1 run from McKendree brought the Bearcats back at 16-15. The Cardinal bounced back with three of the next four points to go ahead 19-16 before the teams traded kills moving the score to 22-19 with two of the Bearcats kills coming from sophomore outside hitter Will Frank (Moro, IL/Edwardsville). Stanford forced set point at 24-20, but McKendree landed another kill from Walker as the Bearcats attempted to rally, but it was not enough as the Cardinal closed the match with a four-point win in the third set.