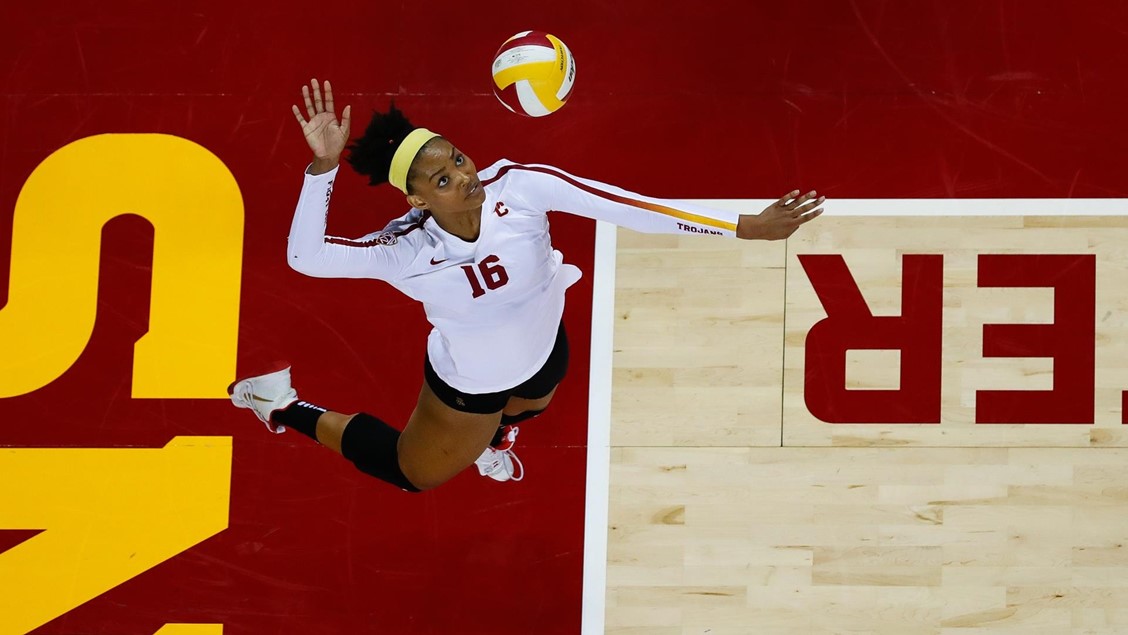 USC hit at a .317 clip and served up five aces in a home sweep of Oregon State on Thursday to move to 5-0 at the Galen Center and 4-1 in Pac-12 play.  Current Photo via USC Athletics

Khalia Lanier notched a match-high 17 kills, while hitting at a .400 clip and serving up three aces. Brooke Botkin downed 15 kills and added nine digs, while Jasmine Gross added seven putdowns on a team-best .636 clip to go with three blocks.

🎥 #HIGHLIGHTS 👀
🍂 Were you raking leaves in the yard tonight? Don't worry – we made you some @SnappyTV highlights of the win over OSU. Check it out and #FightOn ✌️🏐https://t.co/RfRqjVuUbX

Oregon State led by as many as five in Set 1 at 10-5, including three Goings kills and two blocks. USC caught up, tying the score at 12 with four Beaver errors and two Botkin putaways. The Trojans took a brief lead at 14-13, but fell behind by three at 18-15. USC took over from there, scoring eight straight to go ahead 23-18 with help from two kills and a block by Gross. A service error gave the team its first set point try at 24-19 and a Botkin putaway two points late sealed the win.

USC was the aggressor from the start in Set 2, racing out to a seven-point lead at 14-7. Botkin turned in three kills, while Reni Meyer-Whalley and Lanier served up aces and the Beavers made five errors. Two more Lanier putaways pushed the margin to nine at 17-8. The Beavers scored eight of the next 12 to pull within five at 21-16, but the Trojans answered with three straight, two on OSU errors, cut earn a set-point at 24-16. The Beavers stopped two tries, but succumbed to an Emily Baptista kill to fall 25-18.

The teams split the first 18 points of Set 3, before USC pulled away with a 8-2 run, including two kills each by Gross and Lanier. Oregon State called timeout and scored three in a row to narrow the gap to three at 17-14, but would get no closer. Back-to-back kills by Lanier and a Botkin putaway put the Trojans on the hill for the match at 24-19. A Goings kill and a stuff by Gravley and Maddie Sheehan kept the Beavers alive momentarily, before Lanier issued the final blow at 25-21.