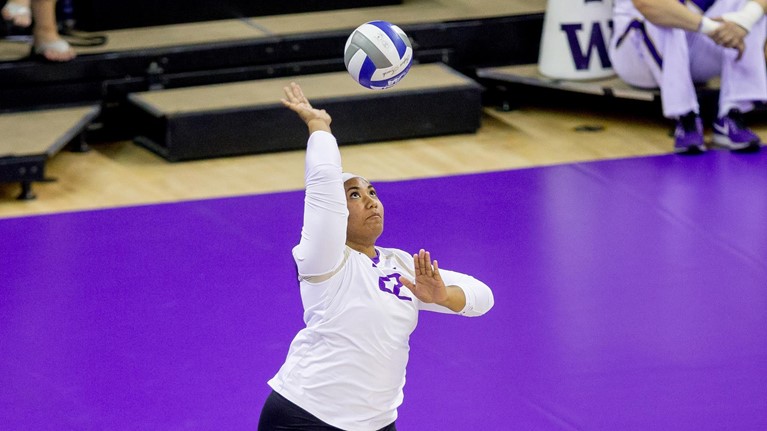 The #9 VolleyMob ranked Washington Huskies downed Maryland in straight sets to take away their perfect season start. The Terps began the season on an 11-0 run, which has been their best start in years and is just one win shy of tying their 2016 wins after going 12-20 last season.

The Huskies held the Terps to a low .096 hitting clip while hitting .319 themselves. Washington also used a strong serve to offset the Terps, earning 10 aces in the match.

The match started on a 4-1 run by the Huskies off kills from Courtney Schwan, Bailey Tanner and Marion Hazelwood. The Terps tried to make a run back at the Huskies but the slow start showed in the team throughout the remainder of the set as they went down 10-20 late. Washington scored four straight to end the set with two kills by Carly DeHoog, a service ace and an attack error from Maryland’s Erika Pritchard that left the first set score at 25-11.

The second set started with a 3-3 tie early before an error on Maryland’s side sparked a run for Washington with DeHoog putting down a kill and block to take the 6-3 lead. Late in the set, the Huskies took the 21-15 lead over the Terps, with just four points on each team being scored from there on out. A service ace by Destiny Julye ended the second 25-19.

The final set saw five quick ties before Washington took the helm on a Terp service errors and Dehoog/Lauren Sanders block. The Huskies expanded their lead to 18-11 before the Terps took small runs to bring themselves close. A Maryland attack error ended the match 25-18, bringing the Huskies to a 10-1 season record so far and Maryland to 11-1.

No. 7 Washington closes out non-conference play with a sweep over Maryland on the road.#PointHuskies pic.twitter.com/PcQHGEVORr

Gia Milana ended with eight kills to lead the Terps while Kelsey Wickinski picked up a match-best 15 digs.