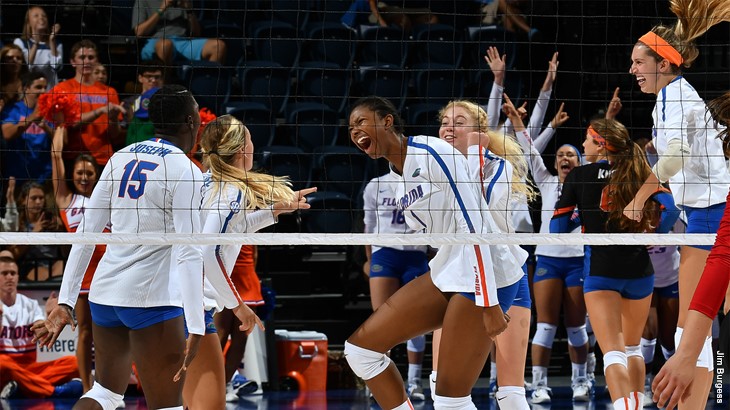 Florida Stays on Top of the Week Four VolleyMob Top 25 after sitting out due to Hurricane Irma. Archive Photo via Florida Athletics

The latest VolleyMob Top 25 created a difficult question at the top, as our top team from last week didn’t play due to Hurricane Irma. Meanwhile, the teams ranked second and third scored top-five wins. However, based on overall resume and eye test having them number one, we didn’t want to drop them down because a freak weather incident put a hurdle in a schedule that could have provided another top-20 win

Beyond that, one common theme throughout the top 25 is resume and how good you look (eye test), which is re-evaluated every week. Who you’ve beaten and the quality of losses stands for more than simply moving up or down the rankings based on results. Of course, there are exceptions to that as we try to balance resume, how good have you looked and more into the latest rankings.

Well that’s about it until the tournament. Unless Florida goes 3-0 through their entire conference schedule, they aren’t going to be able to do much to impress me. Who will be left standing in the Big 10? Certainly looks like PSU and MN. That’s a pretty weak non-conference schedule for Wisconsin – they’ve got a lot to prove. As usual it’s the Big 10, PAC 10 and a few from the Big 12. I’ll grant you the SEC with a big MAYBE on a good day, but do we really need to call the ACC a Big 5 conference? Go Mid-Majors! Especially hoping Hawaii finds their feet after a brutal non-conference schedule. Thanks for previewing the week ahead, Volleymob, so that I can see the only matches worth follwing are Utah v BYU and Iowa St v Creighton.