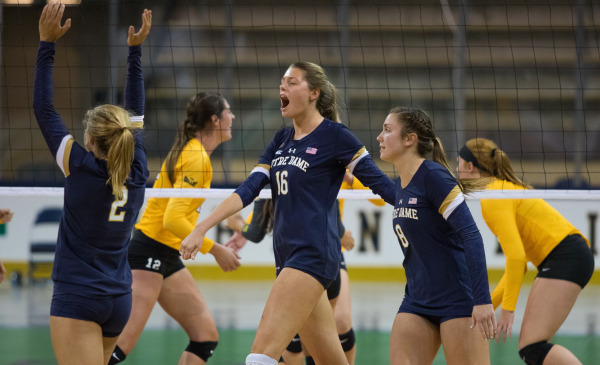 Notre Dame opened the Shamrock Invitational with an impressive sweep of #19 Michigan State. Neither teams hit for a high percentage, but in the end it was the Fighting Irish able to pull off the sweep winning three tightly contested sets.  Set scores were 25-23, 28-26, and 25-22. Jemma Yeadon led the way for the Fighting Irish with 19 kills and Sam Fry chipped in 8 kills and 4 blocks while hitting .375. Caroline Holt dished out 29 assists for the Irish who improved to 8-1 on the season. They will return to action with their second match of the Shamrock Invitational on September 16th when they face Southern Illinois.

NOTRE DAME SWEEPS! Irish Down #23 Michigan State to improve to 8-1 on the season! #GoIRISH pic.twitter.com/vOVoqQUEbQ

Set one was a back and forth affair, with each team trading early three point leads. Neither team hit for a high percentage but Yeadon collected eight kills in the set. The Irish finished off the set on a mishandled ball from Michigan State and although the Spartans outhit the Irish .214 to .152, set one went to Notre Dame.

Set two was all about the Spartans early on as they opened an 8-5 lead behind strong play from Brooke Kranda. The lead swelled to 16-11 on an error from Yeadon, forcing the Irish to call timeout. The timeout provided a spark for the Irish who went on a 4-1 run, cutting the lead to two, and forcing a timeout from the Spartans. The timeout did not stop the Irish who tied the set at 17 on a kill from Yeadon. A service ace from Ryann DeJarld kept the run going and ballooned the Irish lead to 20-17. Michigan State battled back to tie the score at 20 on a kill from Holly Toliver. Notre Dame, who at one point trailed by six points in the set, were able to complete the comeback and took set two on an attack error from the Spartans.

Set three was hard fought with each team trading points and neither team able to create any separation. The first three point gap of the set occurred on a Spartans’ hitting error as Notre Dame opened a 16-13 lead. The lead grew to 19-13 on a double block from Yeadon and Meg Morningstar and the Irish were able to withstand a late rally to finish off the sweep.

Tolivar lead the way for the Spartans with 13 kills and Kranda chipped in 11. Rachel Minarick dished out 33 assists and collected 15 digs. Michigan State falls to 5-2 on the year and will return to action at the Shamrock Invitational on September 16 when they face Central Michigan.

Sophomore Jemma Yeadon once again led the Irish attack, posting 19 kills. Senior Sam Fry also impressed in the attack, recording eight kills and a highly efficient hitting percentage of .375. Junior Ryann DeJarld entered the weekend as the country’s leader in digs per set and bolstered her ranking on Friday, recording 29 digs over the three sets.