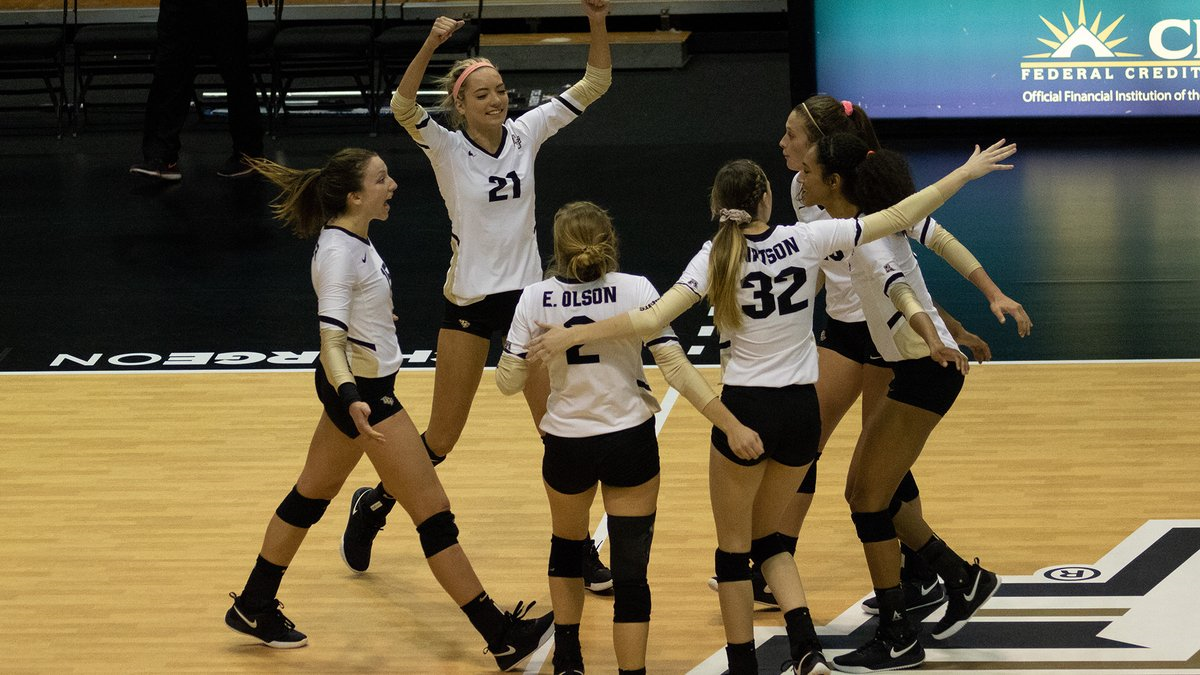 #25 UCF escaped a huge upset from Houston to stay atop the AAC standings. Archive Photo via UCF Athletics

Despite coming in as a match between teams at polar opposites of the American Athletic Conference standings, Houston gave UCF everything they could handle. In the end though, it was the Golden Knights fighting through for a five-set victory to avoid the upset.

UCF hit just .183 in the match and had just three aces but weren’t hurt by serve errors – a trend that has continued this season. They also out-dug Houston thanks to Jordan Pingel (34 digs) and McKenna Melville (20 digs), while they notched 10 blocks as the top blocking team in the AAC, but allowed 13 from Houston. Still, they held Houston to a .159 clip while Melville added 27 kills and Kristina Fisher (16 kills, .208, 9 digs) helped the offense.

Next Up: UCF hosts SMU on Sunday while Houston takes on South Florida on the road on the same day.

South Florida is becoming a team you almost don’t want to go 2-0 up on, as they’ve come back again to claim a five-set victory. This time their victim was SMU, putting the two both at 5-5 in league play.

Helping them near the victory and earn the 2-0 set lead were Rachel Woulfe (15 kills, .293, 5 digs), Brittany Adams (15 kills, .200, 8 digs) and Montana Watts (29 digs) among others. There were other high kill totals, but not enough efficiency for SMU to pull out another game.

Next Up: USF will get upset-minded Houston at home on Sunday while SMU moves to the underdog role in playing at #25 UCF.

Memphis looked like they had upset on their mind early after taking the first set, but from there Cincinnati out-scored the Tigers 75-55 to win in four.

Once again it was the Jordan Thompson show on the right pin. She notched 20 kills (.415), 8 digs, 3 blocks and 2 aces in continuing her All-American pursuit. In total, Cinci hit .265 and held Memphis to a .142 mark. They also had more kills, blocks and assists. Dasha Cabarkapa brought the thunder on the block with 10 to go with her 5 kills (.400).

Memphis was able to tie the match in digs and aces, thanks in part to Hannah Flowers (14 kills, 3 aces) and five players at six or more digs. Anna Palmer (10 kills, .261, 6 digs) was one of those and was efficient as well, though outside of her no one hit above .175 on the team.

Next Up: Cincinnati will take on Tulane on the road on Sunday. Memphis gets ECU at home for their Halloween Party match.

The phenomenal turnaround continues for Tulane, who has now won six in a row in the AAC after an 0-4 start. Their latest victim is ECU after they had a dominant serving match (12-7 in aces) and held ECU to a .157 hitting percentage.

Next Up: Tulane now has a big challenge ahead in hosting (RV) Cincinnati. ECU on the other hand plays at Memphis on Sunday.

Tulsa improved to 9-1 playing at home this season with their latest success, this time a conference sweep victory over the Temple Owls. Tulsa wound up slightly ahead of Temple in all main statistics with a big margin in hitting percentage (.266 to .165).

In the losing effort for Temple, Peyton Boyd (14 kills, .500) and Dana Westfield (13 kills, .333) were impressive. Outside of that though, Temple had just 11 kills compared to 13 hitting errors. Mia Heirakuji (18 digs) also was good in defense.

Next Up: Tulsa gets to host UConn to round out the weekend while Temple will be at Wichita State on Sunday.

The Shockers got back to .500 in conference play as they look to make a late push to the season. The offense clicked more than any time this season, as they hit a season high .316 and held UConn to a .161 mark while more than doubling up blocks (9-4).

Helping UConn slowly inch closer at the final score in each set were Caylee Parker (11 kills, .161, 5 digs), Danielle Cabel (8 kills, .444) and Emma Turner (32 assists, 6 digs, 2 blocks, 2 kills). The defense struggled though and wasn’t able to slow down WSU, leading to the loss.

Next Up: The Shockers will look for a win streak in hosting Temple while UConn looks to bounce back in playing at Tulsa.