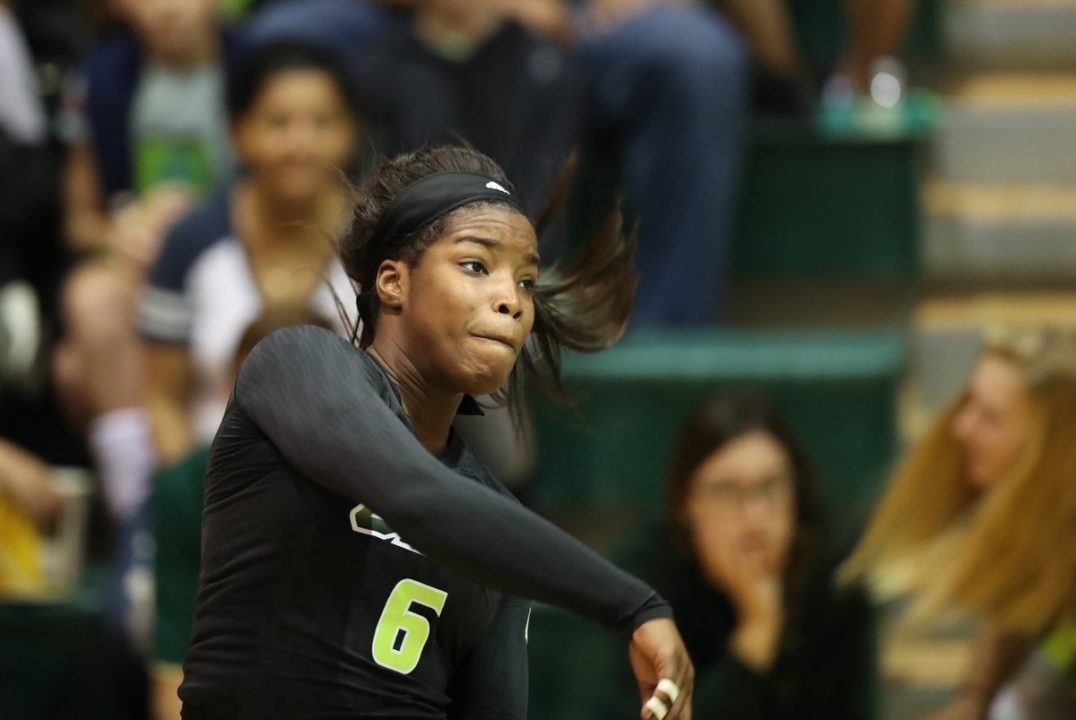 UCF moved to 11-0, increasing its lead atop the conference standings as Cincinnati fell to Tulane. The Knights captured their 17th straight win and stayed perfect at home (12-0) with a four-set victory over SMU.  Current Photo via USF Athletics

Only one match, Wichita State at Temple was done in three sets, four of the other five were decided in four sets, while Memphis and ECU went the distance.

UCF moved to 11-0, increasing its lead atop the conference standings to two matches as Cincinnati fell to Tulane. The Knights captured their 17th straight win and stayed perfect at home (12-0) with a four-set victory over SMU.

Box Score / USF Recap / Houston Recap
USF won its third-straight match with a four-set victory over Houston. The Bulls were powered by Jac’cara Walker, who recorded a season-high 22 kills with 14 digs. Redshirt senior Clara Payne recorded eight blocks and reached the 400-block milestone. Walker’s 22 kills brought her to 304 in a USF uniform this season. Added to the 712 she tallied in her first two collegiate seasons at Marshall and she joins the 1,000 kills club. USF is tied for fifth place with Wichita State.

Another milestone today, as @__jwalk joined the 1,000 kill club! Walker recorded 712 kills in two seasons at Marshall and after 22 today, has 304 in her first year at USF. 💥🤘 pic.twitter.com/Iwqq2C7uFB

Box Score / Tulsa Recap / UConn Recap
Tulsa improves to 10-1 at the Reynolds Center this year after a four-set win over UConn. Rachel Moore recorded her eighth double-double of 2018, racking up 10 kills and 11 digs. Elyse Savadove paced the Hurricane in kills, adding 11 on a team-high .346 clip.

No. 25 UCF remains unbeaten to lead The American after six weeks of conference play, as the Knights hit well and extended their winning streak to 17-consecutive matches. Hitting .278 for the match, the Black and Gold finished above .250 in three of the four sets, including a pair above .420. Two days after setting a career high in kills, McKenna Melville topped her career best with 28 kills to lead the Knights. The rookie took 62 swings and committed just seven errors. Middle Nerissa Moravec finished with double-digit kills for the third time this season at a match-high .381 clip. The Knights are averaging 11.1 blocks per set through their winning streak. It marks the sixth time under head coach Todd Dagenais’ era that UCF has reached 20 wins in a season.

Memphis’ Kelsea Bivins, Kaitlyn Gehler, Molly Murrihy and Anna Palmer all set career-highs in the Tigers’ thrilling 3-2 come-from-behind win over ECU. Memphis dropped the first two sets, but came back to take the last three to win the match. The final frame came down to the last two points, as the Tigers pulled away with a 21-19 fifth-set win. Bivins shattered her previous career-high for kills with 33 Sunday. Gehler’s 33 digs also shattered her previous-best. The Tigers own a 5-2 record in five-set matches this season.

Tulane defeated Cincinnati for the first time since 1995, earning a four-set victory at home to extend its winning streak to seven-straight matches. The Green Wave hit .243, while holding the Bearcats to a .160 hitting percentage. Freshman outside hitter Makala Heidelberg earned her ninth double-double of the season, leading Tulane with 15 kills and 17 digs while hitting .375.

Wichita State completed its second weekend sweep in conference play after defeating Temple 3-0. Junior Alex Koon led the Shockers with 12 kills on .478 hitting and Kora Kauling added 23 assists. The Shockers outhit the Owls in the match, .314 to .165. Wichita State is tied for fifth place with USF with a 6-5 conference record.