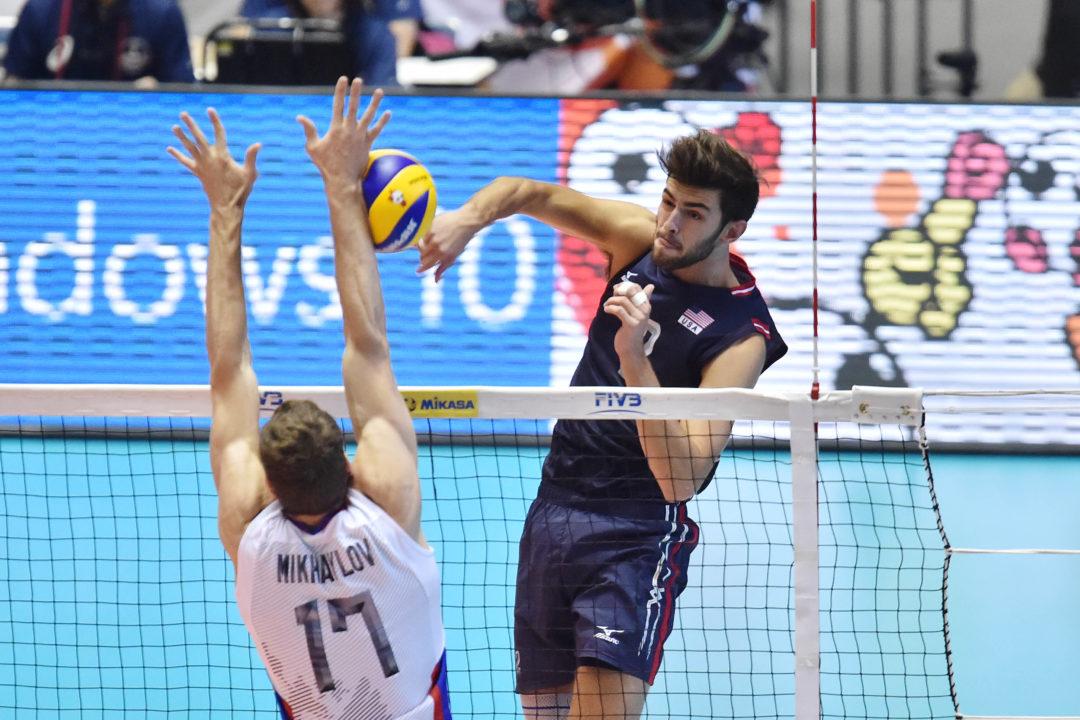 Aaron Russell's future next year is in a loud of uncertainty. While Trentino would like him on their team, they apparently can not afford his salary. Archive Photo via FIVB

With the addition of Leon Wilfredo to the lineup at Sir Safety Perugia, Aaron Russell will probably have to leave the club. The outside hitter with the United States National Team finds himself on a roster with too many foreign players. The Italian SuperLega calls for teams to have 3 Italian players as a part of the 7 in the lineup at any given time. At this point Perugia’s projected starting lineup includes Luciano DeCecco (Argentina), Marko Podrascanin (Serbia), Aleksandar Atanasijevic (Serbia), and Wilfredo Leon (Poland). Perugia is in need of an Italian outside hitter, and rumors are swirling that they have their sights set on Filippo Lanza.

It seemed that there was going to be a straight swap of Lanza for Russell.  Just this past weekend Diego Mosna (president of Trentino) and Gino Sirci (president of Perugia) met to discuss this deal. The potential deal is more complex than it first seemed to outside observers. Russell is still under contract with Perugia, and Trentino would be expected to match the salary he is currently receiving. This figure does not seem to be within Trentino’s budget for the upcoming year.

This complicated scenario will give Trentino the quality Italian outside hitter they need in order to defend their title. It still does not account for Aaron Russell. Perugia will still have a foreign outside hitter they cannot use. Russell has received offers from Asia which would provide an increase in salary. It would also provide a financial benefit to Perugia when another team would have to purchase his rights. Though Russell has not accepted any of these offers yet, and that leaves his future in doubt at this point in time.