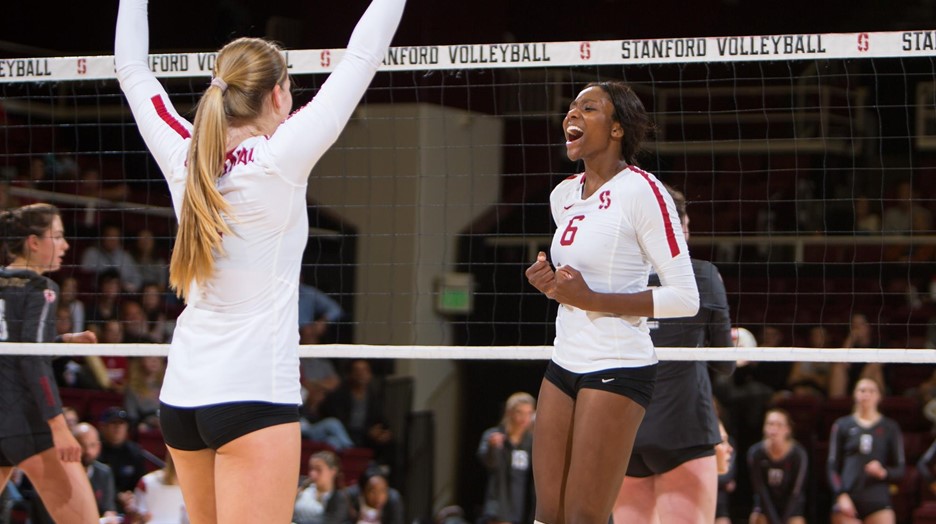 Stanford moved to 10-0 in the Pac-12, while Oregon State fell to 0-10. Arizona suffered another blow to their outside hitter group when Kendra Dahlke left their match with an injury, and Cal's offense found its rhythm in a single-setter system. Current Photo via Stanford Athletics

Stanford moved to 10-0 in the Pac-12, while Oregon State fell to 0-10. Arizona suffered another blow to their outside hitter group when Kendra Dahlke left their match with an injury, and Cal’s offense found its rhythm in a single-setter system.

Oregon came out on fire in front of a fired-up home crowd in Eugene, and after a dominating first set, the 2nd-ranked Cardinal fired back, eventually steamrolling their way to a 10th conference win.

“The first set is what we’re capable of; we have to keep working to be able to sustain that level. We’re not ready to sustain at that level yet,” UO coach Matt Ulmer said. “I thought we followed our game plan pretty much to a T in the first set and a half. They started getting some pressure on us in serve receive, and then we started to panic. We started to lose focus on what we were doing, and focus on what they were doing. That’s the last piece for us; that’s a really big piece though. That’s the difference between the Sweet Sixteen and the Final Four.”

Another match, and another injury for the Arizona Wildcats, as Kendra Dahlke left the match in the 4th set with 21 kills due to an injury. That’s her 7th 20-plus kill effort this season, and she also had 8 digs, 3 blocks, and an ace. She had just returned this weekend after missing last weekend’s USC match with an injury. Hers is the latest in a series of injuries that has ravaged the Arizona outside hitter ranks. Whitnee Nihipali came on for Dahlke after the injury and had 2 of the team’s last 3 kills

In the first of two matchups this season, Washington State knocked off UCLA 3-0 in a hotly-contested sweep. This was a match of scoring rallies: in the first, UCLA took a 16-11 lead, but Washington State scored 7 of the next 8 points to jump back in front and eventually win the set. In the 2nd, it was a 6-point Cougar run, with 5 served by Ashley Brown (including an ace), that gave Washington State an early lead that they wouldn’t relinquish.

The 3rd set was a wild-swinging back-and-forth affair where first Washington State, and then UCLA, and then Washington State again went on big runs. The Cougars finished with a 3-point streak, all clean kills, to clinch the match.

Colorado knocked off Arizona State to create a three-way logjam for 8th-place in the Pac-12. The Buffaloes started Jenna Ewert and let her run with the offense, at the expense of Brynna Deluzio, who started on Friday against Arizona, and after an early adjustment period, that paid off for a .238 hitting percentage in the match. That’s almost .100 points higher than they hit against Arizona.

The wheels continued to fall of the bus on Sunday for Oregon State, as they lost their 10th straight match following a 10-2 record in non-conference play. Oregon State had beaten Cal in their last 7 matchups prior to Sunday’s loss.