Alabama Gets Redemption Against Mississippi State in Four Sets 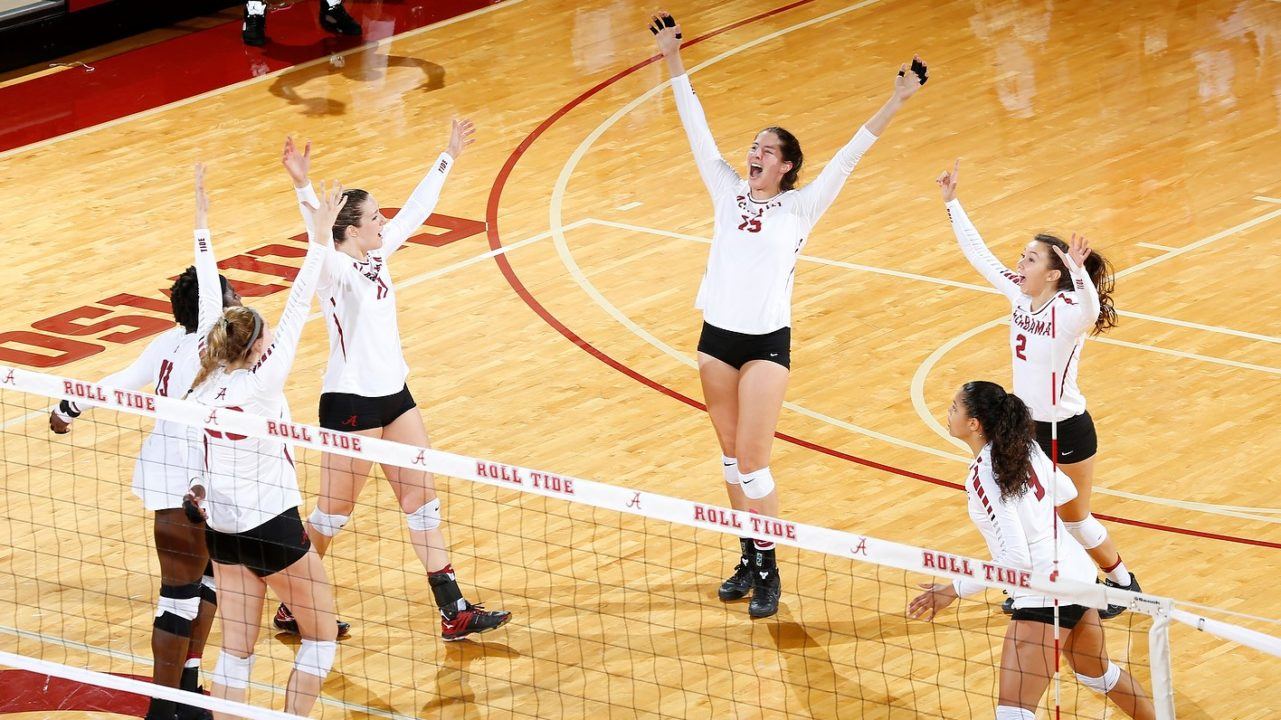 After losing to the Mississippi State Bulldogs in five sets earlier this month in Starkville, Mississippi, the Alabama Crimson Tide were able to even the score with their win last night in four sets. Mississippi State won the first set, but then lost the three following sets, all of which were competitive.

The Tide were led by Krystal Rivers, who recorded a stunning 31 kills. Rivers also contributed on defense with 5 blocks. Brittany Thomas had 11 kills, while also contributing with 15 digs. Alabama’s Leah Lawrence was their third player with double-digit kills, notching 10, to go along with her 4 aces. Libero Quincey Gary led the match in digs with 22, and Shannon Mikesky led in passing with 55 assists.

For the Bulldogs, Evie Grace Singleton led in scoring with an impressive 20 kills and 4 aces (to match Lawrence from Alabama). Jelena Vujcin also tallied 13 kills, while Blossom Sato had 3 aces. Sato also led her team in assists with 40. Defensively, Mississippi State was led by Jazmyne Johnson with 4 blocks and Cheyenne Spell with 20 digs.

TUSCALOOSA, Ala. – Alabama volleyball made its return to Foster Auditorium after three-straight road matches with a four-set win over Mississippi State Wednesday night, falling in the first set 21-25 before winning three straight by scores of 25-20, 25-20 and 25-21.

Alabama (14-5, 3-3 SEC) hit .315 as a team, its highest hitting percentage in SEC play this season, while limiting Mississippi State (11-9, 3-3 SEC) to a .208 clip. Leah Lawrence led the way with a season-high .600 hitting percentage and was equally strong at the service line, scoring four aces for the second-straight match. Brittany Thomas posted her second double-double of the season, finishing with 11 kills and 15 digs along with a season-best .409 hitting percentage. Quincey Gary, making her second start at libero, led the defensive effort in the back row with a career-best 22 digs.

The two teams battled back and forth early in set two until Mississippi State scored three-straight points to break a 10-10 tie, moving ahead 13-10 as Alabama called a timeout. The Bulldogs maintained its lead for the remainder of the set, leading by the same margin late at the Tide’s second timeout, 23-20. MSU held on to win by four points, 25-21.

Tied at 10-10 again in set two, it was Alabama that began to pull away this time, scoring five unanswered points to lead 15-10 at the media timeout. Alabama continued to extend its lead, using a 7-4 run to move ahead 22-14 before Mississippi State was forced to take its first team timeout. The Tide reached set point, 24-17, but the Bulldogs battled to keep the set going with three-straight points as Alabama looked to stop the momentum with a timeout leading 24-20. Krystal Rivers ended the set on the next rally with her 18th kill of the match to win, 25-20, and even the match at 1-1.

Mississippi State briefly pulled ahead 4-3 early in the third, but momentum quickly swung back Alabama’s way courtesy of a 7-2 run to lead 10-6 at the Bulldogs’ first timeout. MSU came out of the break with four-straight points to tie it back up at 10-10 and eventually retake the lead at 12-11. The lead was short-lived as the Tide went back on top 14-13 and continued to pull ahead after three-straight service aces by Lawrence to make it 17-13 as the Bulldogs took a timeout. Lawrence added a fourth-straight ace after the break and a block by Rivers made it 19-13 before Mississippi State finally earned a kill to stop the scoring streak. With Alabama leading 23-17, three-straight points by MSU cut the lead in half and forced the Tide to burn its first team timeout. The Tide scored back-to-back points following the break to win, 25-20, and take a 2-1 lead.

The Bulldogs scored the first two points of the fourth set but Alabama rallied in a big way, scoring seven unanswered points to pull away 7-2 and force a frustrated timeout for Mississippi State. The Tide added three more out of the break to make it a 10-2 game and leading by the same margin later, 16-8, Mississippi State cut the deficit down to four points at 18-14 but a Bulldog service error and a kill by Rivers gave the Tide a six-point lead at the 20-point mark, 20-14, as Mississippi State took its final team timeout. Another kill by Rivers made it 21-14 before MSU responded with four-straight points to draw within three and force the Tide to take its first team timeout. Alabama eventually reached set point, 24-20, and after a Rivers attack error to make it 24-21 she came back with her 31st kill of the match

Next up, Alabama faces Missouri (15-3, 6-0 SEC) on Sunday, Oct. 16 at 1:30 p.m. CT in Foster Auditorium. The match will be the Tide’s annual Power of Pink event, an athletics initiative to raise breast cancer research awareness.

TUSCALOOSA, Ala. – Despite opening up with a first-set victory, the Mississippi State Bulldogs (11-9, 3-3 SEC) could not turn back the Alabama Crimson Tide (14-5, 3-3 SEC), dropping a Wednesday night contest, 3-1, in Tuscaloosa.

State came out of the gates strong in the first set, taking a 25-21 win. However, the Bulldogs could not carry the momentum, as Alabama found victory in the next three sets to capture the match. The two teams split the season series, with both teams winning on their home courts.

“We started off strong tonight, but just lost our focus in the next three sets and you cannot do that on the road in the SEC,” MSU coach David McFatrich said. “We made a lot of mental mistakes in this match and it cost us. Now we have to regroup and get ready to continue this road trip at Auburn on Sunday.”

The Dogs earned a balanced performance in the opening frame, as four players tallied at least three kills. A kill from Jelena Vujcin and back-to-back aces from Evie Grace Singleton lit a fire under the Bulldogs midway through the set and forced an Alabama timeout. The Tide would try to chip away at State’s lead, but only came as close as two, as the Bulldogs pulled out a 25-21 first-set victory.

Singleton turned on the jets in the second set, leading MSU with 8 kills. However, it would not be enough to secure a 2-0 lead. Tied at 10-10, UA strung together a 6-0 run and cruised from there, pulling out a 25-20 win.

The third set spelled much of the same, as MSU kept play close until an Alabama run midway through the frame, This time it was a 7-0 run highlighted by four-straight aces from Leah Lawrence. The Bulldogs would force a late timeout from the home team after cutting the lead to 23-20, but could not complete the comeback, dropping the set, 25-20, and giving UA a 2-1 lead.

Wednesday night’s final set was all Alabama from the start, as the Tide jumped out to a 10-2 lead. MSU once again rallied late, but could not come any closer than two, as Alabama earned a 25-21 win and sealed the match, 3-1.

Singleton’s 20 kills topped MSU for the night and marked her fifth match of the season with at least 20 kills. Vujcin followed with 13 kills, her seventh-straight match in double digits.

Blossom Sato tallied her fourth outing of at least 40 assists in the last five contests. That moves her career total to 1,444, 84 assists away from tying for ninth place in the MSU career record books.

State was unable to come out victorious in the blocking battle, but did see another solid showing from Jazmyne Johnson. Her 4 total blocks led the Dogs on the night. State had three players with double-digit digs, led by Cheyenne Spell, who had 20. That total marks her third match of the season with at least 20 digs. Emily Hill earned a career-high 14 digs, while Payton Harris turned in 12.

MSU will stay in the state of Alabama for its next contest, heading to Auburn for a Sunday, Oct. 16 showdown at Auburn Arena. The Bulldogs and Tigers are set for a 12 p.m. CT first serve on the SEC Network.

Singleton Strong On The Attack…
Senior Evie Grace Singleton turned in her fifth 20-plus kill performance of the season, as her 20 topped the Bulldogs on the night. She has now turned in double-digit kills in the last eight matches.

…And On The Serve…
Singleton was also a beast from the service line yet again. With 4 aces, the senior tied a season high set earlier this season at Tennessee and came one short of tying her career high.

Sato With Another Solid Night On The Court…
With 40 assists against the Crimson Tide, sophomore Blossom Sato turned in her fourth showing of 40-plus assists in the last five contests. She also turned in a trio of aces, with set a season high.

Hill With A Career Defensive Night…
Freshman Emily Hill has turned out strong performances on offense all season, but tonight her strength was on the other side of the ball. Hill turned out 14 digs on the night, a career high.

Record Watch: Payton Harris…
Junior Payton Harris now stands at 1,408 digs for her career and continues to make strides up the MSU record book. She currently holds fourth place on the school’s career digs list and is 25 short of tying for third place. Melissa Kariker (1993-96) holds the school record with 1,707.

Up Next…
The Dogs will stay in the state of Alabama, as they head to Auburn for a Sunday afternoon battle with the Tigers. First serve from Auburn Arena is set for 12 p.m. CT and will be nationally televised on the SEC Network.