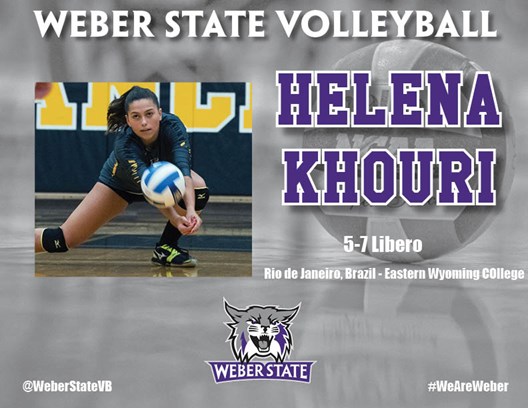 Weber State has landed a junior college transfer/recruit from Eastern Wyoming College in 5’7″ defensive specialist/libero Helena Khouri. A junior-to-be in the fall of 2018, Khouri will have two years left of play and is immediately eligible for the upcoming season.

For her efforts in 2017 she was named the Libero of the Year in Region IX North and was also an NJCAA Region IX North All-American nominee in addition to All-region First-Team.

“We are looking forward to having Helena in our gym,” Weber State head coach Jeremiah Larsen said in the team’s release of the signing. “We lost two very important defensive players last season with the graduation of Thamires and Jesse. Helena has the work ethic, and skill set to compete to fill their shoes.”

Weber State finished the 2017 season at 9-20 overall, including a 7-9 mark in Big Sky play. Khouri will look to impact the team as one of three liberos on the 2018 roster.