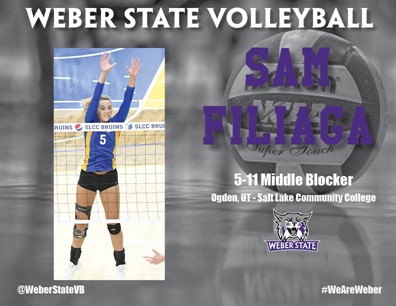 A 5’11” native of Ogden, Utah, Filiaga came to Salt Lake Community College after she was a four year letter winner at Bonneville High School, earning All-Region First Team in 2014 and 2015.

Following her prep career, Filiaga would become a key contributor at SLCC and a team that went 21-6 last season. In total for the year, she notched 95 kills (1.14 per set) on a .312 mark to pair with her 1.27 blocks per set – which was third in the South Western Athletic Conference.

“Sam is a really athletic player and will help bring depth to a shallow position from a year ago,” Weber State head coach Jeremiah Larsen said in the team’s press release. “She moves really well laterally, and is a good offensive threat. She has great work ethic and an incredible mindset. As she learns our blocking system I know she will challenge Aubrey and Hannah immediately. We look forward to her contributions in a long line of solid middle blockers at Weber State.”

Weber State went 9-20 in 2017, including a 7-9 mark in Big Sky play. That team had three middle blockers on the roster – all sophomores who likely will be back to join Filiaga at the position come 2018.