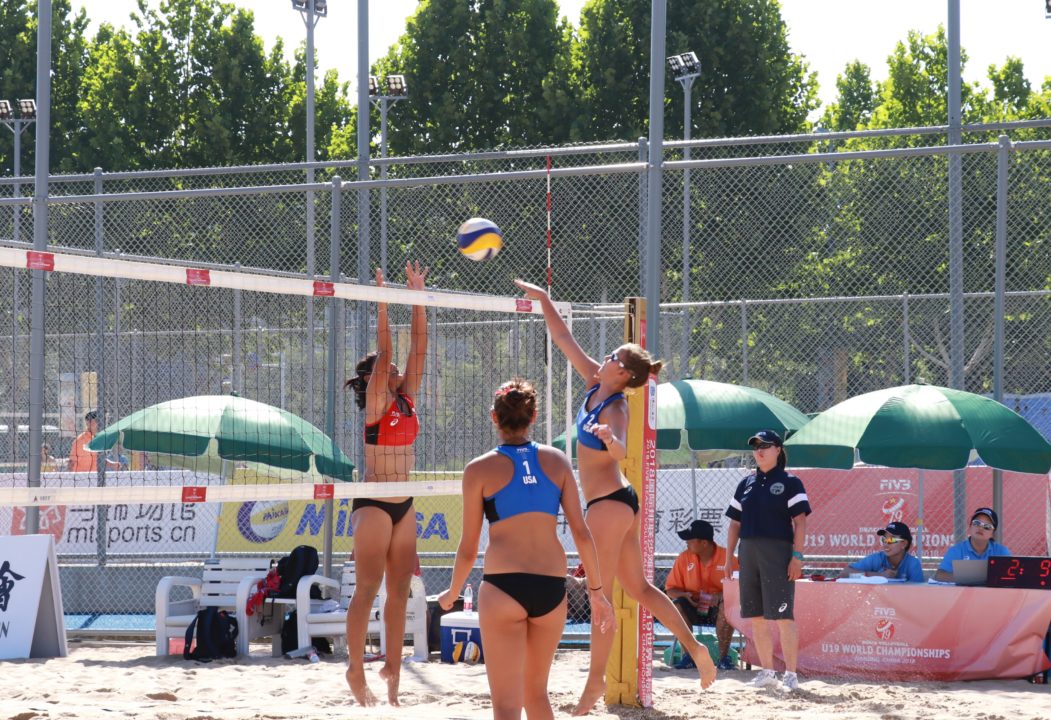 None of the four U.S. teams that competed in at the recent FIVB U19 World Championships in Nanjing China had played internationally before Current Photo via FIVB

Needless to say, when it comes to youth beach volleyball, the European and Asian circuits are much ahead in terms of development than what’s practiced in the USA, where the sport works basically in a pay-to-play arrangement. Although the NCAA has helped to improve the women’s game, making it a sanctioned college sport, the men’s game still hasn’t achieved that privilege.

In order to keep up their level of competition, many US youth teams are making trips to tournaments abroad to try and close that gap. They are finding international competition to be much different than what they have faced in the US, but know that they more international experience they get, the better. USA Volleyball has shared some players’ experiences after the U19 Beach World Championships in Nanjing, China in its official website. None of the four U.S. teams that competed in at the recent FIVB U19 World Championships in Nanjing China had played internationally before:

“You go into international competition and you hear that it’s going to be this whole new world. We had no idea what to expect. To have such an experience with the most amazing team. To all support each other and to go through such hard times, all just to play the sport that we love was the best experience.”  – Devon Newberry

Those girls are physical. It’s not like here. We have this spotty game. Those girls just come in hard every time and try to nail the ball at you.”–  Lindsey Sparks

Lindsey and Newberry finished 4th in the competition.

“It’s a big game. A lot of the guys are not necessarily huge, but everybody is able to jump and swing.” – Jacob Titus, eliminated in the prelims

“A lot of the European teams play against each other all the time.And they play in the adult events on the European tour. Our kids play a lot of youth events, so they don’t see the power game. We could out-ball-control, we could dig anyone we played. We weren’t used to having to come in hard and hit the ball every time. We weren’t used to having to put a block up so often.” – Ali Lamberson, who coaches the Junior Beach Team,

“My first World Championships was a whirlwind. From long flights, to new and weird foods, to extreme heat, to tough competition; this tournament was nothing like any I had ever played before. There were so many high and lows that made this journey so special and I am so thankful to have been a part of it. Competing internationally is different for many reasons, but the biggest is the level of competition. International players play a much different style of game than we tend to play here in the U.S.. For one, they are very physical and don’t hesitate to play like it. Secondly, many of the teams have played together for a long time and have a deep chemistry that gives them an advantage. Lastly, they have more international experience than we do here. Especially in Europe, there are many youth tournaments where the athletes get opportunities to play against top foreign players […] So it is important to learn to be comfortable being uncomfortable […] In closing, Worlds was the coolest experience of my life. It was incredible getting to represent Team USA against the best in the world. Although I didn’t get the result I wanted, I learned so much about what it is like to compete internationally. I am very thankful for this opportunity and am excited for the chance to do it again in the future.” – Tim Brewster, who tied for 25th in the tournament