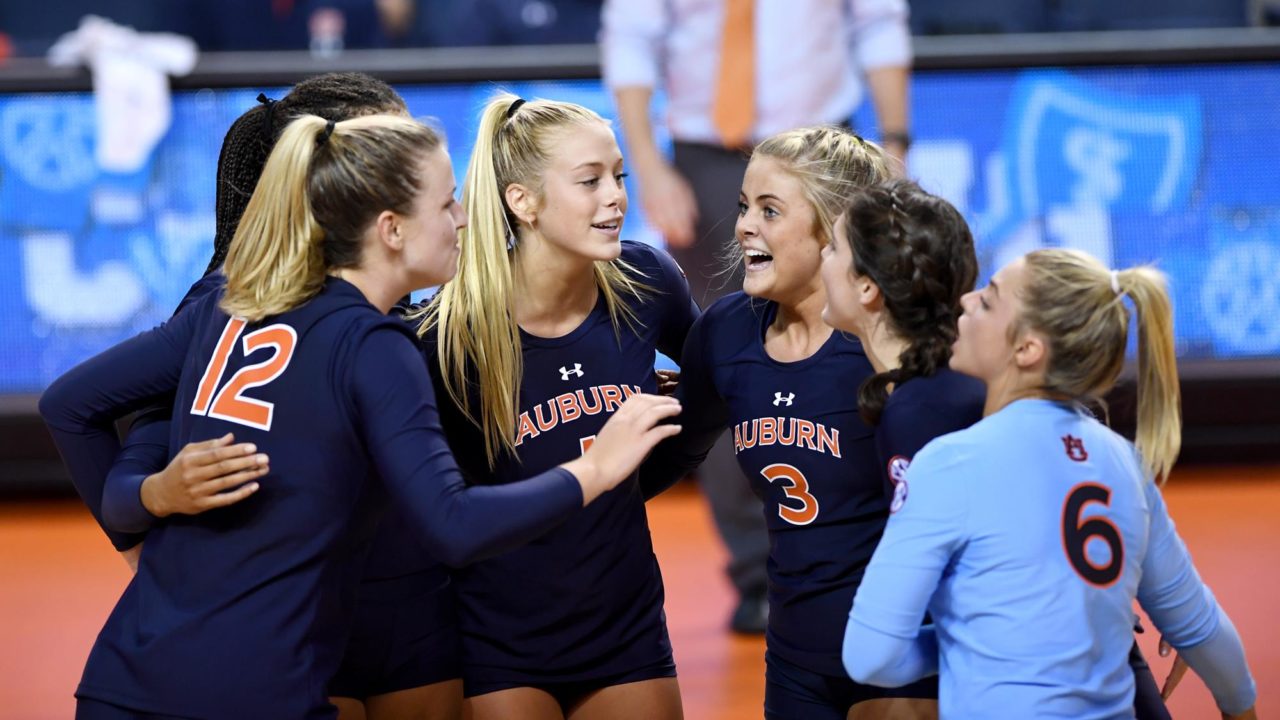 “We’ve talked about how we need to learn something every week in order to improve and this weekend will be another good learning experience for this young team," Auburn head coach Rick Nold said of the Kansas Invitational. Current Photo via Auburn Athletics

AUBURN, Ala. – The Auburn volleyball team faces another tough road swing this weekend, traveling to Lawrence, Kan., for the Kansas Invitational, Sept. 7-8, in the Horejsi Family Athletics Center.

The Tigers kick off the weekend with a 10 a.m. CT match vs. Loyola Marymount Friday and cap the day with a 7 p.m. CT contest against host Kansas. Auburn closes out the weekend Saturday vs. American at 11 a.m. CT.

“Top to bottom, there is a lot of talent this weekend in Kansas,” head coach Rick Nold said. “We’ve talked about how we need to learn something every week in order to improve and this weekend will be another good learning experience for this young team. There is a lot of variety with the three teams we’re facing and it will be very beneficial for the upcoming SEC schedule. We’re excited to see what this group can do during what is probably our toughest weekend to date.”

– Senior outside hitter Brenna McIlroy and junior Gwyn Jones were placed on the all-tournament team.

– McIlroy finished with a 3.40 kills/set average, having double-digit kills in all matches. In the second set vs. Butler, McIlroy notched her 1,000th career kill on the Plains.
– Jones put together a 2.60 kills/set average and had a .415 hitting percentage on the right side for Auburn. She reached a season-best 12 kills against EIU and notched a career-high .667 hitting clip vs. the Panthers.

– Freshman Taylor Rowland had a solid weekend for the Tigers, having double-digit kills in all matches. She picked up a career-best 14 kills against Eastern Illinois and finished with a .545 attack percentage vs. host Butler.

– Freshman setter Mica Allison boosted her assists average after totaling 40 or more assists in two of Auburn’s matches. She notched a career-best 43 against EIU, while picking up her first double-double vs. Illinois State (40a, 11d).

– Allison is third in the Southeastern Conference with a 10.94 assists/set average.

– Freshman Bella Rosenthall has earned the starting nod at libero in all five matches for the Tigers. The Yorktown, Ind., product leads the team with a 3.88 digs/set average. That mark ranks ninth in the SEC.

– Auburn’s 2018 schedule boasts 10 2017 NCAA Tournament participants.
– Head Coach Rick Nold stands at 111-103 in his eighth season on the Plains.
– Auburn returns five of seven starters from the 2017 season.
– The 2018 Auburn volleyball incoming class is ranked the seventh-best freshman class in the nation.
– Auburn was picked sixth in the SEC Preseason Coaches’ poll.

UP NEXT
Auburn faces a quick turnaround after the Kansas Invitational, traveling to Kennesaw State for a Tuesday night match, Sept. 11, at 6 p.m. CT. The Tigers cap the non-conference slate Sunday, Sept. 16, hosting Florida State in Auburn Arena at 12 p.m. CT.