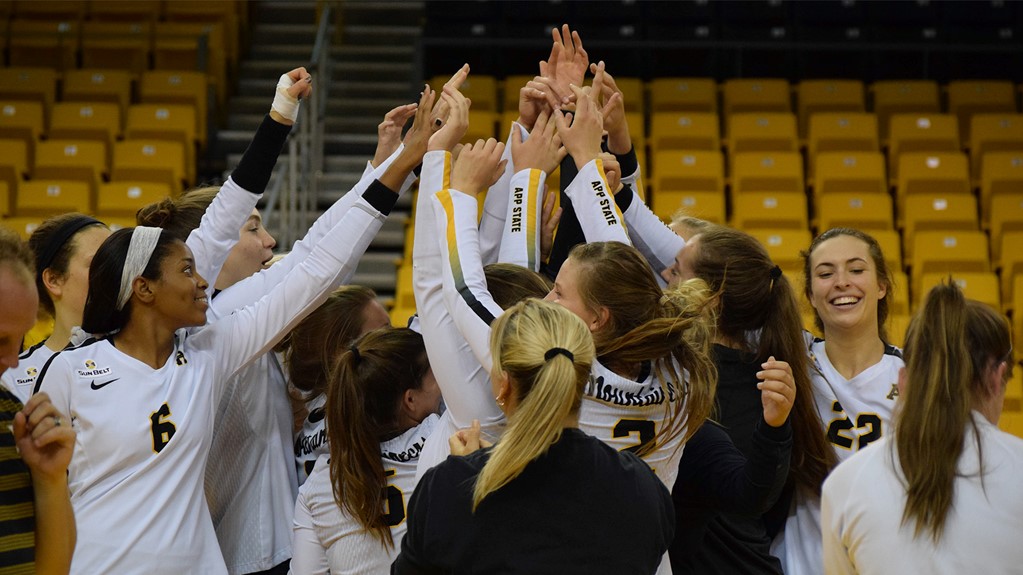 The top eight teams in the Sun Belt Conference advanced to the conference tournament to decided the conference's bid for the NCAA Tournament. Current Photo via Appalachian State Athletics

The bottom four teams had to duke it out in the first round of the tournament, with #6 UTA taking on #7 Appalachian State and #5 South Alabama fight against #8 Troy.

Both of the lower seeded teams fought their way through five-set showdowns to advance to the Sun Belt quarterfinals.

Appalachian State hit only .191 to UTA’s .209 and was statistically less superior than the Mavericks but was able to pull out the match.

Kara Spicer led the way for the Mountaineers with 15 kills on a .429 hitting clip along with five block assists. Three other players recorded double-digit kills – Courtney Sullivan (12), Lexi Kohurt (11) and Emma Longley (10). Setter Ashlyn Brown ran the show for the Mountaineers with 51 assists and 12 digs for a double-double while Sydney Farthing and Emma Reilly picked up 16 and 12 digs, respectively. On the block, Cassidy Stephenson led the way with eight blocks on the night.

Qiana Canete led all players with 19 kills in the match along with 20 digs for a double-double while Kylie Jedlicka recorded one of her own with 13 kills and 12 digs. Zhanelle Geathers put down another 17 kills and five blocks while Madison McConnell contributed seven kills, five digs and five aces. In the backcourt, Libbie Vickers added another 12 digs in the loss.

How it happened: After dropping the first set, Appalachian State picked up their play in the next two sets to take the 2-1 match advantage. They, however, could not put it away in four sets, with UTA forcing a fifth and deciding set.

The fifth set was sealed in the Mountaineers favor as they posted a 6-0 run to start things off. They continued this dominance and used UTA’s errors to take the set and match 15-11.

Up Next: The Mountaineers will take on #3 Louisiana on Friday, November 17 in the semifinals of the Sun Belt Tournament. The winner of that match will advance to the semifinals where #2 Texas State awaits them.

Logan Page and Savannah Moore were the top-scorers of the night with 17 kills each for Troy. Moore played a huge defensive role as well with eight blocks while Page added in another five. Belle Waldrop recorded another 13 kills in the win while setter Kiara Barrett dished out 37 assists and 13 digs for a double-double. Two other players picked up double-digit digs – Cheyenne Hayes (18) and Bethany Cullity (17)

For South Alabama, Lauren Hartman and Kelley Hartman each posted 12 kills in the loss with Hannah Harris adding another 10 to her tally. Kelley Hartman also recorded seven blocks while Harris stuffed five. Abby Baker led all player in defense with 19 digs.

How it happened: Troy nearly let their 2-0 match lead slip away, as South Alabama fought back to tie things up a 2-2 and force a fifth and deciding set. Troy jumped out to a 3-0 lead in the fifth set and again to an 8-2 lead over South Alabama. Holding a 12-6 lead and needing just three points to clinch the match, South Alabama kicked things into gear with a 5-1 run that brought the score within two. South Alabama fought off two match points but a Troy kill ended the match 15-13.