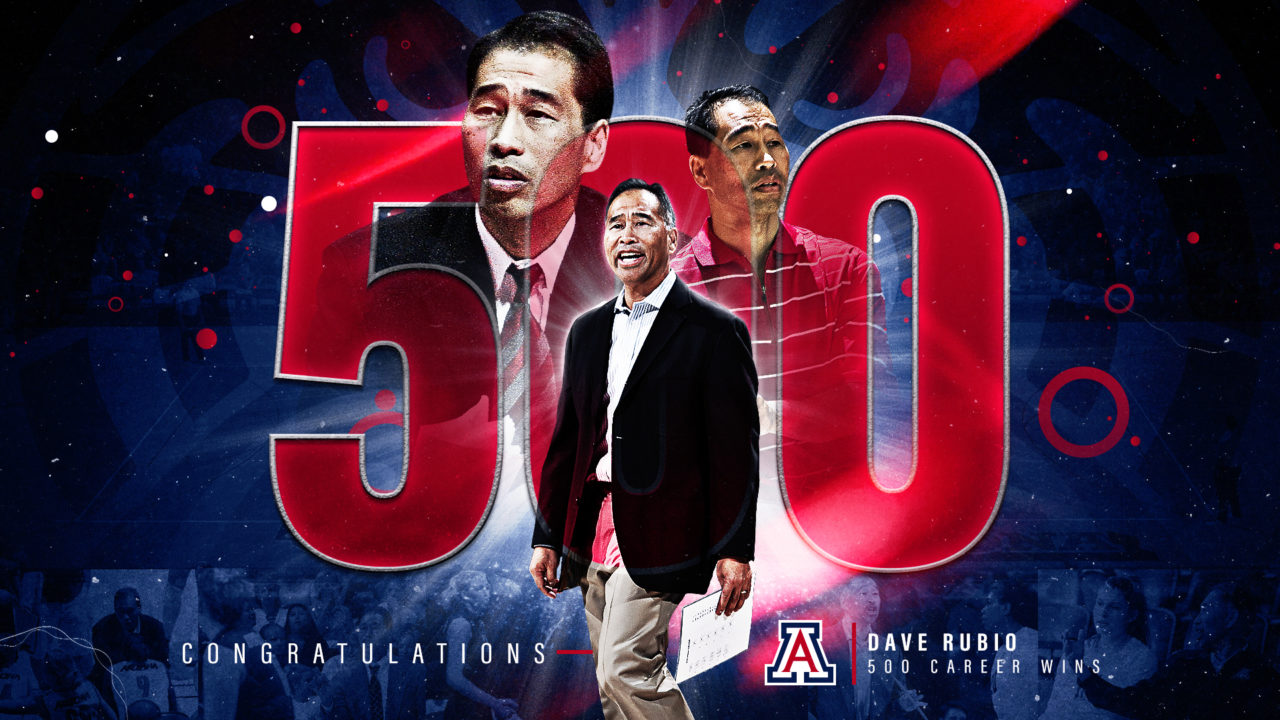 TUCSON, Ariz. — Arizona opened up the match with a pair of sweeps of UT Martin and New Mexico State to improve to 10-1 on the season and 5-0 at home. The two wins were head coach Dave Rubio‘s 499th and 500th victories at Arizona.

Bear Down and congratulations, Coach! pic.twitter.com/B3ZsGC4sGB

UA closes out the Wildcat Classic on Saturday vs. UC Davis at noon.

Arizona kicked off the 2018 Wildcat Classic with a straight-set victory over UT Martin (25-19, 25-14, 29-27) that included a nine-point comeback in the third set to finish off the match. The win was the ninth in 10 tries for the Wildcats this season and the 499th in head coach Dave Rubio’s Arizona career.

In the absence of senior outside hitter Kendra Dahlke, the Pac-12’s leader in kills who missed the match due to injury, UA was led Paige Whipple (13 kills) and Devyn Cross, who had a career-high 12 kills in the match on .500 hitting. Cross also had a match-high five blocks.

Julia Patterson (25 assists, 10 digs) and Whipple (13 kills, 11 digs) had double-doubles in the match. Patterson’s was her third of the season; Whipple’s was her first.

The Cats dominated the second, overpowering the Skyhawks with 13 kills on 26 attacks while holding UT Martin to five kills compared to seven attack errors.

It was all UT Martin early in the third set. The Skyhawks led the Wildcats 17-8 before a 14-2 Arizona run turned that nine-point deficit into a two-point lead for the Wildcats. UA would hold on to win, 29-27 to sweep the match.

Arizona completed its Friday sweep of the Wildcat Classic with a straight-set win over New Mexico State in the nightcap (25-18, 26-24, 25-17), the 500th win in head coach Dave Rubio’s Arizona career.

The Wildcats got their revenge on New Mexico State, which defeated UA last weekend in Las Cruces, Arizona’s lone loss this season. UA left no doubt with a 3-0 victory over the Aggies.

UA has been led by its offense all season long, but on Friday night its defense was the story. The Wildcats posted a season-high 13 blocks in the three sets, led by a season-high seven from Devyn Cross. Elizabeth Shelton and Paige Whipple had four blocks each, a season high for Whipple.

The sweep was possible because of a huge comeback at the end of the second set. Arizona was down 23-17 before scoring nine of the next 10 points to steal the set and take a 2-0 lead in the match. The comeback mirrored New Mexico State’s rally in the fourth set of last weekend’s match in Las Cruces; the Wildcats led in the fourth 23-18 and two sets to one in the match, but the Aggies came back to win the fourth and then won the fifth to earn the victory.

Kendra Dahkle, who missed Arizona’s first match of the day due to injury, had 15 kills to lead the Cats against the Aggies. She extended her streak to 10 consecutive matches with 15 or more kills, the longest streak in school history. Dahlke paired her 15 kills with 14 digs for her fourth consecutive double-double and team-best seventh of the season.

Arizona led wire-to-wire in the first set, using a 4-0 run to start the match to get early separation and extending the lead from there to eventually win 25-18. The Cats had five blocks in the opening set, three from Devyn Cross, and UA held NMSU to .079 hitting in the frame.

UA rallied back from seven down late to steal a victory in the second set.

The Cats closed out the match with a 25-17 win in the third.

On reaching 500 wins against New Mexico State, where his brother, Keith Rubio, is an assistant coach:

“In some ways it was fate, with my brother being on the other side. I’m also close with that staff, Mike Jordan has been at New Mexico State for 20 years and done a fantastic job. If I had to choose who it happened against, I would choose to do it against a staff that I care about and certainly my brother. It was a good crowd and the volleyball was great. The level of play was high and we got more comfortable on the court during the second and third sets.”

“It’s awesome because he’s been here for so long. He deserves it and it’s an awesome milestone for him to hit in his 27 years here. We’re all proud of Dave and it’s awesome to be a part of it with him.”