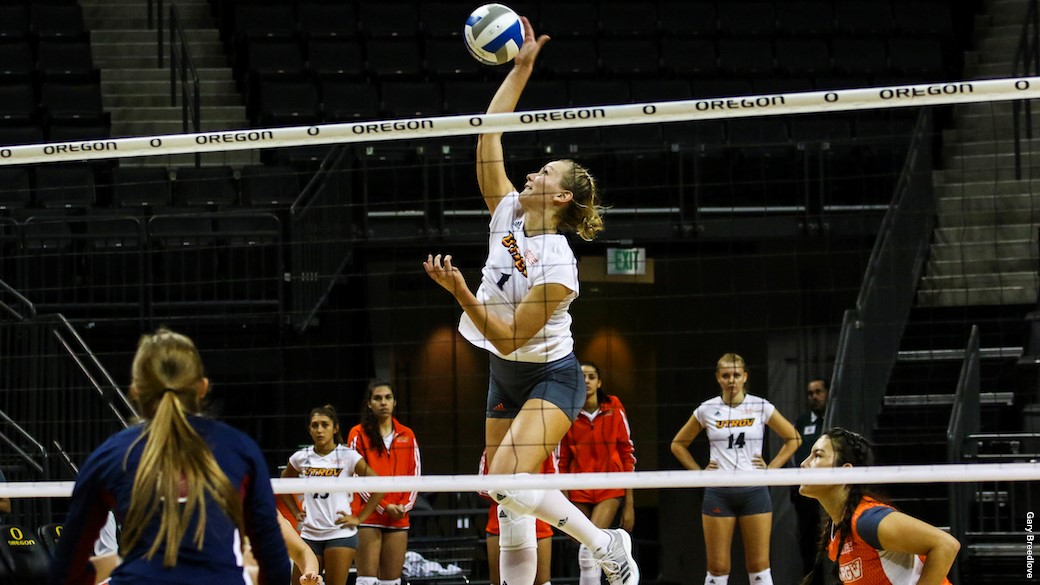 Senior Ragni Steen Knudsen became the ninth member of the UTRGV 1,000 kills club, now with 1,011 after recording a match-high 19 kills on .375 hitting with 13 digs for her third double-double of the season against Texas Tech.  Current Photo via UTRGV Athletics

Senior Ragni Steen Knudsen became the ninth member of the UTRGV (8-5) 1,000 kills club, now with 1,011 after recording a match-high 19 kills on .375 hitting with 13 digs for her third double-double of the season.

The first set was tight most of the way, as there were three lead changes and 12 ties. UTRGV had leads of 1-0 on a kill by junior Talita Oliveira, 2-1 on a Knudsen kill, and 9-7 on back-to-back Knudsen kills. UTRGV tied the set at 17 on a Jularic kill before Texas Tech went on an 8-2 run to end the set.

UTRGV jumped out to a 4-1 lead in the second set on a Vukoja ace and a Silva kill. Texas Tech scored the next six points to take the lead before UTRGV went on a 9-5 run to take the lead on a Jularic kill. Then, with the score tied at 14, a Jularic kill and a Zayas ace sparked a 7-2 run to put UTRGV up 21-16. Texas Tech won three of the next four serves to get close, but UTRGV used a Vukoja ace and a Silva kill to score three of the final four points.

Texas Tech jumped out to a 20-12 lead in the third set. Knudsen responded with four kills to power a 7-2 run to bring UTRGV within 19-22. Then, with the score 19-24, a pair of Silva kills helped UTRGV pull within 23-24 before a block by Keenan and Atwood ended the set.

UTRGV went on a late run in the fourth set as well, as down 12-23, three Jularic kills and two kills by senior Alexandra Ecker helped UTRGV get as close as 17-23.

UTRGV wraps up the tournament on Saturday at 12:30 p.m. against Houston Baptist. Texas Tech faces Texas Southern at 10 a.m. Gates open at 11.

Although the result wasn't what we would have liked, thank you to our INCREDIBLE crowd. Record 2,176 fans! #EleVate #WACvb https://t.co/Ovg6Ts1ozU