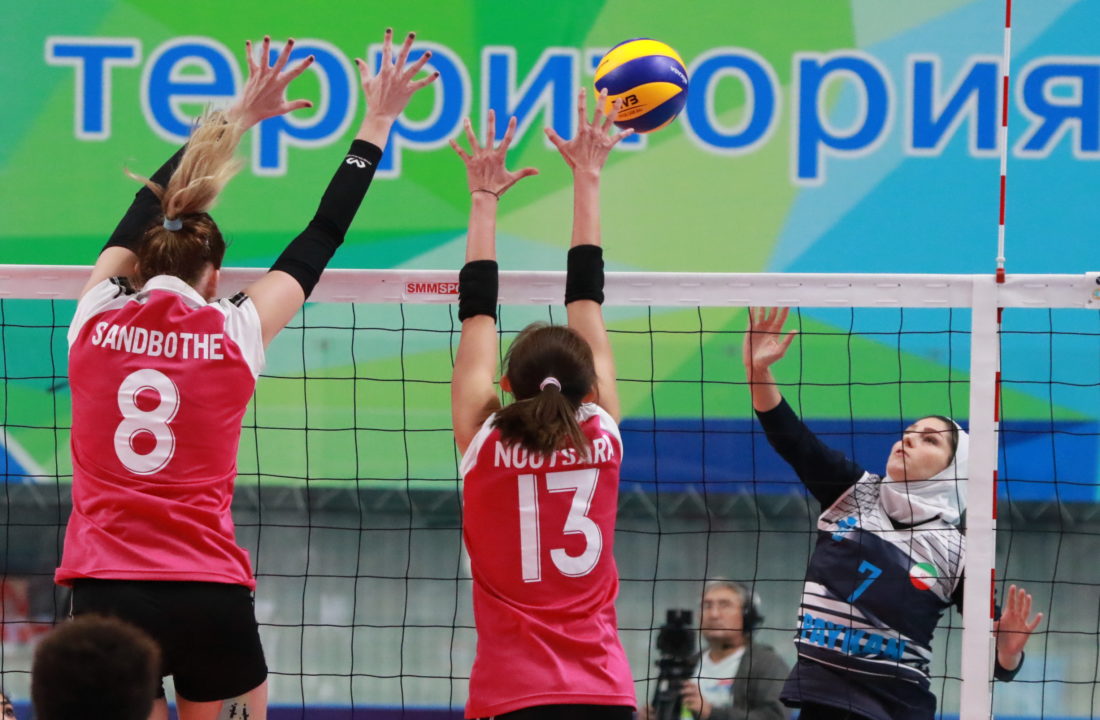 Taylor Sandbothe scored 13 points for Supreme Chonburi in a 3-0 sweep of Paykan Tehran VC in the quarterfinals. She led the match with 5 blocks to help her team reach the semifinals.  Current Photo via Asian Volleyball Confederation

Saturday was the first day of playoffs at the Asian Women’s Club Championships and the matches were less than compelling. Thie first day of playoffs consisted of 3 of the quarterfinal matches and the 1st round match. All of the matches finished in 3-0 sweeps, and of those 12 sets, only 4 of them had both teams reach 20 points. It was quite a display of one-sided affairs.

The Lanka Lions never got past 12 points in any of the sets in their 3-0 drubbing at the hands of CMFC. The Sri Lankan team’s leading scorer was Chathurika Ranasingha, who scored 6 points on 6 kills. Thillini Perera, Aspara Senevirathna, and Amani Godellawaththa all chipped in 5 points apiece. Senevirathna had a service ace, and that was the only point scored by the Lanka Lions that was not a kill or opponent error.

CMFC of Chinese Taipei produced a balance attack, and no player scored over 9 points. Their leading scorer, Yi-Ching Lo, scored 9 points and did not even start the match. Wan-Chen Tsai, Tsu-Ya Chen, and Mei-Cing Low all chipped in 7 points each.  Tsai was the only player of that trio to play the whole match. Low only played in the first 1st set and Chen played did not play in the 3rd. All 12 players on their roster got into the match, and every player except the libero and setters scored.

CMFC will face the NEC Red Rockets of Japan in the last quarterfinal match on July 16th.

Supreme Chonburi of Thailand made quick work of Paykan Tehran VC with a sweep in which the Iranian side never got past 16 points. Ajcharaporn Kongyot led the way for Chonburi with 17 points on 12 kills, 2 blocks, and a match-high 3 aces. Former Ohio State Buckeye, Taylor Sandbothe, contributed 13 points in the victory. She put away 8 kills, and a match-leading 5 blocks. Wilavan Apinyapong broke into the double-digit column with 10 points on 10 kills.

Esfahani Borhani was the only player to score at least 10 points for Paykan Tehran. She scored points on 6 kills, 2 blocks, and 2 service aces. Soudabeh Bagherpour and Tahmineh Dargazani both scored 7 points in the defeat. Bagherpour contributed 6 kills and a block, while Dargazani finished with 5 kills and 2 blocks.

In mostly tightly-contested quarterfinal match, Zenith Steel Jiangsu of China defeated Garuda VC of Indonesia. While the match was still a 3-0 sweep, every set went to at least 20 points. Ruoya Xu was the match’s leading scorer with 19 points. She scored her points from 16 kills, 1 block, and 2 aces. Han Wu followed Xu with 12 points for Jiangsu on 11 kills and a block. Wenjin Yang scored 10 points in the  victory.

Manganag Santini scored 15 points, all on kills, in 3 sets for Garuda. Nabila Fajrina scored 12 points on 9 kills and 3 blocks. Salsabila Ayu did not start the mach, but she came off the bench for Garuda and scored 6 points on 6 kills.

In the last match of the quarterfinals, Altay put away VTV Bình Điền Long An in 3 sets. Natalia Sharshakova led the match with 14 points for Altay of Kazakhstan. Her points came form 3 kills and an astounding 9 blocks in the win. Olga Drobyshevskaya finished the match with 12 points on 9 kills and 3 blocks. Sana Anarkulova chipped in 9 points on 8 kills and a block. Altay averaged 7 blocks per set and out-blocked their Vietnamese opponents 21 to 3.

Thi Ngoc Hoa Nguyen was VTV Bình Điền Long An’s leading scorer with 12 points. She scored from 8 kills, 2 blocks and 2 aces in the defeat. Thi Thanh Thuy Tran added 11 points to the stat sheet. All of her points came from kills. Thuy Anh Phuong Truong was their 3rd-leading scorer with 7 points on 5 kills, 1 block, and 1 ace.