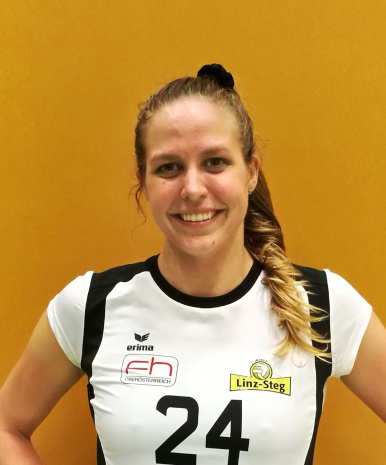 Austrian club Askö Linz-Steg has announced in its official website the signing of two American players, Samantha Cash and Sofia Martinez-Lavin, to its roster. Current Photo via Volleyball-linz.at

Austrian club Askö Linz-Steg has announced in its official website the signing of two American players, Samantha Cash and Sofia Martinez-Lavin, to its roster.

The 25-year-old 6’2″ middle blocker Cash, a Pepperdine University alumni, is transferring out of Team Northumbria from the UK to what will be her third professional season in as many countries (she also played one year in Spain). As a college athlete, Cash enjoyed great success at both indoor and sand volleyball at Pepperdine, finishing her indoor career with 447 blocks (third best in program history), 415 block assists (2nd), and .324 hitting percentage (7th). On the sand, she was a member of the 2014 AVCA Collegiate Sand Volleyball national championship winning squad. Internationally, she captained Team USA at the 2010 Youth Olympic Games, winning silver.

Here is how the team reacted to her signing:

“Samantha could prove to be a lucky strike for us. She brings international experience and knows life in Europe. At college, she underwent through a great educational process and our own players can learn somethings from her.” – Team Manager Andreas Andretsch

The 23-year-old 6’1″ Sofia, a 2nd generation American, is transferring out of Denmark’s Holte to what will be her sophomore professional season. She played her college ball at University of San Diego during her freshman and sophomore seasons, then later transferred to Northwestern University. At USD, she played sporadically, but helped the team to its best season in program history, in which it beat No. 1 ranked team USC, achieved the No. 2 rank in the nation, and made it as far as the Sweet 16 at the NCAA tournament.

Here is how coach Schwab reacted to her transfer:

“Sofia immediately made it clear that she wanted to join us. We took good care of the decision and closely monitored it during training. It was crucial for us in the end she already has very good skills, but we also see a lot of potential for improvement in her. She is an open type and made it clear from the beginning that she really wants to come to us and work hard for the team. When I look at the team, I see many characters who radiate the unconditional will to win and also make that clear on the court. I think we will have a lot of fun!”